B&W is best known for their top of the line speakers, but moving down the line up you still get a lot of speaker but now at a much lower price. While the 683's won't have the cabinetry of the Nautilus they will still impress sonically. 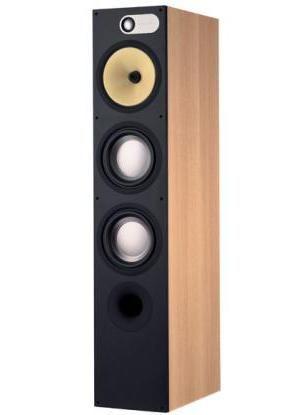 The highly-regarded speakers firm of Bowers & Wilkins has recently introduced the fourth generation of its popular and reasonably priced 600 series speakers. This series of speakers is especially important for this venerable manufacturer, as they are the first made in B&W's new plant in China. This allows B&W to include many features previously only found in their higher-priced lines at a reasonable price, for example, the model 683 floor-standing speakers, which at the biggest in the series retail at $1,500, with the HTM61 center channel at $650. The series includes two floor-standing speakers, two bookshelf speakers, two centers, one surround and a selection of three subwoofers. This allows B&W to compete favorably with speakers offered for sale at the big box stores.

Despite their reasonable price points, the 600 series is filled with truly advanced features. The aluminum dome tweeters are mounted in an oval-shaped alloy plate, which gives all the speakers in the series a distinctive look when their grilles are removed. The tweeter assembly uses trickle-down technology from the unbelievable, cost-no-object Nautilus series of speakers, tube loading, Neodymium magnets and a first-order filter. While all of the 600 series feature Kevlar midrange drivers, the 683s feature B&W's FST (fixed suspension transducer), previously only available in the high-end B&W series. The FST technology places a ring of foam with mechanical properties matching that of the driver in the place of a traditional surround to reduce distortion of the cone face. The bass drivers are a paper/Kevlar mix, with an aluminum skin. Bass is supplemented with the Flowport. The Flowport has been used in other B&W speakers and is simply described as a port with golf ball-type dimples to reduce port noise. A rubberized, soft touch material is placed on the front side of the cabinets. This, coupled with the elimination of visible screws around the drivers, makes for a very attractive package. The rest of the cabinet is finished in a choice of four vinyl veneers, with the floor standers resting on black plinths, which are both attractive and functional, as they add stability. The 683's 57-pound cabinet is 38.8 inches tall, 7.8 inches wide, 13.4 4 inches deep and houses four drivers, a one-inch tweeter, a six-inch midrange and a pair of six-and-a-half-inch woofers in a three-way configuration. Frequency response is 38Hz to 22kHz, with a sensitivity rating of 90 dB. The HTM61 is the larger of the two center-channel options at 7.8 inches high, 21.5 inches wide and 13.4 inches deep. Frequency response and sensitivity match that of the 683s.

The new 600 Series sounds more refined than its predecessors. I was particularly impressed by the 683's neutrality. The midrange did a good job with both female and male vocals. The highs, while perhaps just a bit forward, were clean, extended and should compete favorably with most options in this price range. The soundstage was open and deep, with relatively solid placement of the individual sources. With R&B or pipe organ concertos, the 683s benefit from the use of a subwoofer to handle the lowest frequencies, but are clean and detailed within the bounds of their response curve. The HTM61 was a capable performer, but I did not feel that it was up to the same performance level as the 683s. I was able to give the 685s, the larger of the two bookshelf speakers, a listen at a local retailer and would consider trying one of them in center position.

â€¢ The 683s offer great bang for the buck, with numerous B&W features not previously available from B&W (or anybody else for that matter) at this price point.
â€¢ The voicing of this speaker is neutral with minimal coloration, allowing you to hear what the artist (and/or recording engineer) intended. That's why studios like Abbey Road use Bowers and Wilkins speakers.
â€¢ The high-frequency response was very clean and extended in ways you might expect from speakers costing significantly more than $1,500 per pair.
â€¢ The 683s offered good dynamics and frequency response for speakers of their size.

Low Points
â€¢ The vinyl cabinet coverings are not up to par when compared with B&W's higher-end products or even some similarly-priced competitors from China, notably PSB.
â€¢ The high frequencies can sound a bit forward, particularly if electronics are not properly paired. It's part of the B&W sound. Without question, these speakers will work with a solid receiver but they sound even better on a Rotel or Classé' amp and preamp.
â€¢ There were times when the HTM61 couldn't keep up with the dynamics and pace of the 683s. A larger, more output-capable center speaker might be a good addition to the line for those looking for extreme volume output from movie soundtracks in larger rooms like mine.

Conclusion
The 600 Series provides serious bang for the buck, especially for stereo set-ups. I found them to be open, neutral and musical to listen to in ways I expect from audiophile speakers costing $3,000, not $1,500. The 683s replaced Dynaudio speakers that are more than twice as expensive. With no disrespect to the Dynaudio transducers, which I liked a lot, I was able to quickly fall in love with the B&W 683s at half the price. Were the 683s as refined or detailed as the Dynaudios? No, but they weren't worlds behind, the 683s' price might suggest. I highly recommend that those shopping for a floor-standing speaker in the $2,000-a-pair price range take a look at the new fourth-generation B&W 600s. They pack serious technological and musical heat without the audiophile price tag.

â€¢ Search for the perfect receiver for the 683 loudspeaker.
â€¢ Find an amplifier to power these loudspeakers.