Bowers & Wilkins has a storied history of high-end audio. Maserati has a history of being one of the most high-end car companies out there. You can imagine how high-end this team up between the two must be. 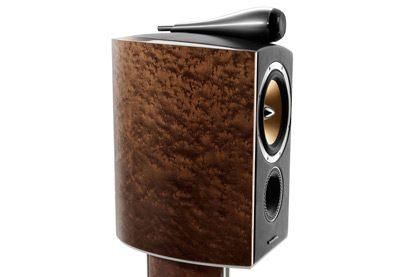 To celebrate the partnership between Bowers & Wilkins and Maserati, Bowers & Wilkins has announced a loudspeaker inspired by Maserati. The 805 Maserati Edition provides a twist on the 805 Diamond, by incorporating elements of the interior of a Maserati car.

The 805 Maserati Edition is crafted from materials that reflect the partnership: the bird's eye maple real wood veneer and black Maserati leather reflect the interior of the brand's cars, and the speaker stand that forms an integral part of the 805 Maserati Edition is finished with the same polished wood veneer and features the Maserati Trident. The Trident has been part of the Maserati identity since 1926, and was designed by Mario Maserati based upon the statue of Neptune in the fountain of Bologna's Piazza Maggiore.

Towards the end of 2013 there will also be a P5 Maserati Edition headphone launched.

Both products will be first shown as part of the 'Seven Notes World Tour', a musical exploration of the Maserati engine that visits Dubai, Beijing, Shanghai, Tokyo, Los Angeles, New York and London, plus a special Vogue tribute event during Men's Fashion Week in Milan.

Seven Notes was inspired by the sound of a Maserati engine, and in an attempt to discover if the engine was truly musical, Bowers & Wilkins commissioned acclaimed musician and producer Howie B (who has worked with the likes of U2 and Björk) to record the sound of a Maserati engine. Howie B discovered seven notes, which formed a unique Maserati scale, and then used these to create music in the form of Seven Notes. The tracks are available to download exclusively at www.SevenNotes.com.