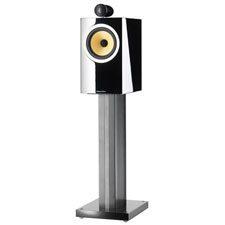 Audio Reviews, Bookshelf Speaker Reviews, Equipment Reviews
Published On: November 19, 2014
We May Earn From Some Purchases Via Affiliate Links 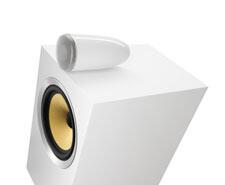 Bowers & Wilkins is one of those longstanding brands that needs little introduction. When the company introduced the mid-tier CM10 tower speaker in 2013, it made significant waves within the high-end audio world, demonstrating how B&W can meld value with absolute performance. Fast-forward to the present and the S2 version of the CM Series, in which B&W has extended the Decoupled Double Dome tweeter technology from the CM10 down through the rest of the series. The CM6 S2, the top bookshelf speaker in the series priced at $2,000 per pair, carries with it another major distinction: it and the CM10 are the only speakers in the new CM Series to feature the tweeter-on-top design that is used in the company’s higher-end speakers.

The CM6 S2 cabinet is moderately sized at 13.4 inches tall, 7.8 inches wide, and 11.2 inches deep, and it weighs 19.6 pounds. This is a two-way speaker containing a one-inch aluminum tweeter responsible for everything from four kHz and up and a 6.5-inch woven Kevlar cone midrange/woofer taking on everything below that all the way down to a stated lower bound response of 50 Hz. The stated sensitivity rating is moderately low at 88 dB, with a nominal impedance rating of eight ohms--although part of the impedance curve will dip as low as 3.7 ohms, so take care not to pair these with amplifiers that cannot be stable at least into four ohms. The cabinet design is sleek but not over the top, and the speaker is available in three finishes: gloss black, satin white, and rosenut. The speaker connections allow for all standard types of connectors like spades, bananas, and bare wire. A removable bridge between the high- and low-frequency inputs allows for standard or bi-amplification.

Setup was quick and painless. B&W was kind enough to send me a pair of matching stands designed for the CM Series bookshelf speakers, which are easy to assemble. I placed the speakers on top of the stands in the footprints that my Salk Soundscape 12 tower speakers normally occupy. My Oppo BDP-105 served as the source, feeding my Parasound Halo JC2BP preamp and then my Crown XLS 2500 amplifiers via Blue Jeans interconnects and Monoprice speaker cables.

Female vocals sounded splendid. With Whitney Houston’s “I Will Always Love You” from The Bodyguard: Original Soundtrack Album (Arista), I heard an incredibly detailed treble with crystal clear highs. Unlike speakers that feature tweeters made from exotic materials, the CM6 S2 doesn’t have that special sparkle/twinkle in the highest registers. This can be a double-edged sword, though, as I find some exotic-material tweeters to have a rather pretentious or artificial presentation, while the CM6 sounded quite pleasing and natural. The inherent depth in Houston’s voice shone through in spades, powering through the room and never sounding thin or weak.

Whitney Houston - I Will Always Love You (Official 4K Video)

Male vocals like John Mayer’s or Michael Buble’s were equally rich and clear. Where the CM6s excelled was with vocals that have a little texture to them, such as Adele or John Legend. The speakers reproduced all of the expected nuances of their voices, including Adele’s little squeals and Legend’s raspy croons. B&W speakers have a reputation for being neutral and uncolored, not adding to or subtracting any of the music’s opinion or character. I’ve heard others characterize this as polite or, sometimes, boring. If there were any truth to that, then the CM6s would be uncharacteristically B&W, as they are anything but boring. With high-energy music--from Al Di Meola’s attacking flamenco guitars to Daft Punk’s energetic beats--the CM6s exhibited a lot more slam than I expected.

The B&W speakers had great imaging with the music tracks I listened to, and this only continued when I switched to video sources. During a binge session of Breaking Bad, the CM6s had excellent clarity in delivering voices, music, sound effects, etc. One scene in “Felina,” the series finale, especially caught my attention. Skyler White is in her apartment, and the phone rings off-screen. As the camera move and the phone comes into the frame, I could hear the sound as a clear, gradual, superbly controlled pan from left to right, not an abrupt jump as lesser speakers would deliver (if you could hear the shift at all). Then, as Skyler picks up the phone, the sound image jumps immediately lower to her sitting position. As she hangs up the phone, the screen tilts a little and Walter White, the main character (and Skyler’s husband), is shown standing elsewhere in the room. Now I heard two distinct vocal images matching exactly their positions on screen, with Walt to the right and standing, Skyler still sitting at her chair. There was a clear differential in height and positioning. I was literally amazed by the CM6’s prowess in soundstaging and imaging.

Throughout both my TV and movie watching, I found the CM6s to offer quite substantial bass. Even without the use of a subwoofer, the car-door slams, explosions, and fight sequences retained their usual heft. Of course they can’t deliver a room-shaking movie experience on their own, but I felt that very little was lost when I left the subwoofer off and ran the B&Ws in full-range mode for most of the material I had on hand. 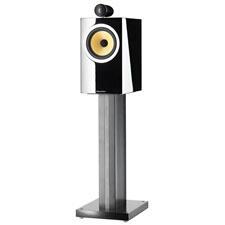 High Points
• The B&W CM6 S2s have exceptionally accurate imaging, far above their price class.
• These speakers have classic B&W neutrality, but with a little more fun.
• Their wide dispersion characteristics make for a very big sweet spot.

Low Points
• The speaker’s moderately low sensitivity combined with a low minimum impedance means you need to carefully select your amplification.
• A subwoofer is required to get truly chest-slamming bass.

Comparison and Competition
At $1,500 per pair, the KEF LS50s are the speakers to beat in this range. Those speakers will offer truly unmatched transparency, as well as a hair’s breadth more refinement in midrange detail. However, the CM6 S2s play much lower and hence will be far easier to blend well with a subwoofer. In addition, the B&Ws have no trouble sounding like a big speaker in a moderately sized room, and their imaging performance is simply unparalleled in this price range. The Paradigm 30th Anniversary Inspiration speakers cost a little more at $2,500 per pair: they will play a little lower and have a little warmer, more open sound, but I consider the CM6 S2’s imaging and dispersion to be superior.

Conclusion
I would put the B&W CM6 S2s in the same class as the very best bookshelf speakers out there. For a lot more money, you can get speakers that sound as good in the midrange and up while giving you more bass detail, more bass output, and more dynamic capability. However, if soundstaging and imaging are of any importance to you (and I highly suspect they will be for many readers of this publication), I can honestly say that I have not heard many speakers below $5,000--bookshelf, floorstanding, or otherwise--that can equal, let alone surpass, the CM6 S2s in this regard. I’ve never thought of B&W as a high-value brand, but the CM6 S2s are an astonishing value at $2,000 per pair. These are now my new reference bookshelf speakers.

You'll automatically be entered in the HTR Sweepstakes, and get the hottest audio deals directly in your inbox.
Subscribe
Connect withD
Login
Connect withD
13 Comments
Oldest
Newest Most Voted
Inline Feedbacks
View all comments
HomeTheaterReview Rating
Value:
Performance:
Overall Rating:
This is the static ad content. This is just a placeholder for now to get things styled.
Visit Website