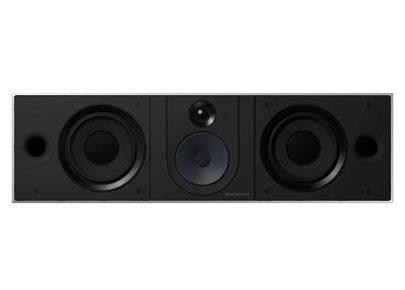 Bowers & Wilkins has announced the arrival of CI 800. The flagship custom installation series is an attempt to deliver the quality levels associated with the reference quality 800 Series Diamond in loudspeakers designed to fit into walls and ceilings.

The CI 800 range comprises three speakers, with one in-ceiling and two in-wall models. All speakers in the range feature core Bowers & Wilkins technologies, many of which appear in an installation loudspeaker for the first time.

Included in the CI 800 is the Bowers & Wilkins Carbon Braced Tweeter, previously only found on the PM1 loudspeaker. It uses a ring of ultra-thin wound carbon fiber to brace the tweeter dome, and as a result raise the break up of the aluminum dome to around 40KHz, which has a dramatic effect on the audible frequencies below 20kHz.

In addition, the tweeters in all CI 800 models are Nautilus Tube Loaded designs, and are fully de-coupled from the rest of the speaker assembly, as in the 800 Series Diamond. This reportedly ensures that the LF units do not transmit unwanted vibrations, which might compromise high frequency performance.

The midrange drivers are made from Kevlar, dyed blue rather than Bowers & Wilkins traditional yellow for visual discreetness, and use the Anti-Resonance Plug from PM1.

Finally, one of the biggest challenges facing Bowers & Wilkins engineers was ensuring a consistency in every installation. Relying on the wall cavity as the speaker enclosure was not an option. Indeed, as with quality free standing speakers the enclosure is a vital component in the overall system design. For the CI 800 range fully engineered Matrix enclosures were developed, adapted to custom application requirements.

The CWM8.3 is a three-way, in-wall loudspeaker that features a Carbon Braced Tweeter, a 5in Kevlar FST drive unit and two 7in carbon fiber reinforced Rohacell low frequency drivers. The central baffle is rotatable, so the CWM8.3 can be used in either vertical or horizontal alignment.

The second in-wall model in the new CI 800 range is the CWM8.5. This two-way loudspeaker features a Carbon Braced Tweeter and a single 7inch bass/mid Kevlar driver, with anti-resonance plug. It also features a single Flowport.

The CI 800 Series features a single in-ceiling model, the CCM8.5. This two-way model features a 7in bass/mid driver, again in blue Kevlar. The 1in Carbon Braced Tweeter features a ‘wing’ design, which allows for the time alignment, required to produce the best possible performance from an in-ceiling speaker. All the drive units are located in a continuously rotatable mini baffle, which allows for the custom installation version of ‘toeing in’ the loudspeaker toward the listening position.