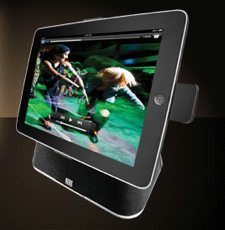 Altec Lansing formed as a combining of Western Electric’s initiative for selling and servicing its loudspeaker products into the motion picture industry (dubbed the “All Technical Service Company”), with the company founded by loudspeaker design legend James B. Lansing, in 1941. The company went on to produce some the professional audio industry’s most acclaimed electronics and loudspeaker products. Altec Lansing helped to develop the coaxial loudspeaker, and produced a range of horn and hybrid theater loudspeaker systems, including its famous “Voice of the Theater” array, some of which are still in use today.
After decades of re-organizations and bankruptcies, the company attempted to break back into the professional market, with little success. In the meantime, the company began to make strides with its line of portable, wireless, and USB-based designs, and was bought by Plantronics in 2005. In 2008, the company underwent numerous personnel changes in order to refresh its multimedia offerings on both a cosmetic and technological level, and has since emerged with a new suite of product offerings.