Ben Shyman explores the M1SE dual mono DAC/preamplifier from Bricasti Design--a high-end DAC that is built like a tank and offers a full suite of digital inputs. 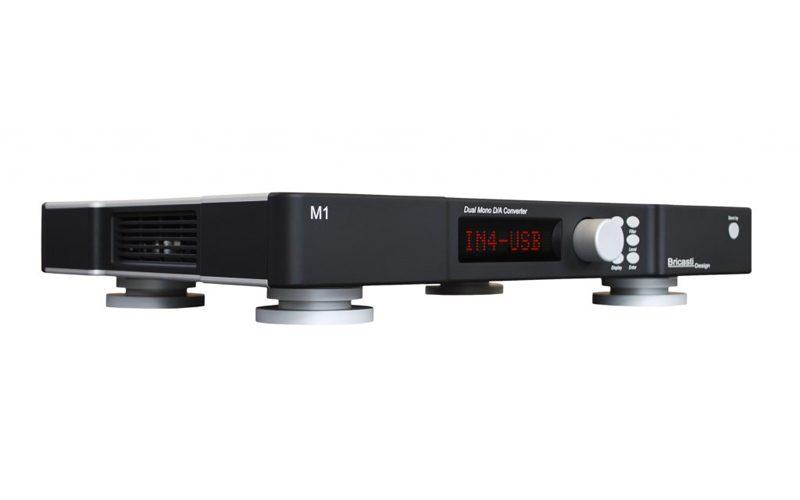 Bricasti Design is one of those companies that is well known in high-end audio circles and recording studios but seems relatively unknown or obscure to general audio enthusiasts. Founded in 2004 by former employees of Lexicon (part of the HARMAN Specialty Group), Bricasti Design cut its teeth producing reverb products for professional recording studios, a market which it dominates to this day. Its products are designed and manufactured in Massachusetts.

The subject of this review is the M1SE Dual Mono DAC/preamplifier. According to Brian Zolner, CEO of Bricasti, it was the company's goal to produce a product that could accommodate any digital source and was predominantly format-agnostic. The original M1 was released several years ago and has gone though several upgrades and iterations, the next of which will likely be MQA support sometime in 2018.

At $10,000, the M1SE is for affluent consumers of high-end audiophile gear. Its build quality is outstanding, with a chassis that is machined from aluminum. The front-panel display is large--an advantage for those of us who see like bats--and contains only pertinent information, such as input and sample rate. Six modestly sized buttons are used in conjunction with a single knob to control functions like level, input, and display. Since the only two audio inputs I use are USB from an Apple computer and Toslink from video sources, it seemed appropriate to use the M1SE in its Auto mode, which automatically detects and selects the "live" input (a feature which I loved). The rear panel contains a full suite of digital inputs, including Toslink, USB, AES/EBU, and coaxial (both BNC and RCA). Outputs are RCA and XLR.

In addition to a single digital input section built around an Analog Devices digital controller called the SHARC DSP, the M1SE has two dedicated analog sections, each with its own Analog Devices 1955 chipset, clock, and power supply. Each clock is synchronized by a SHARC digital signal processor in the digital section. Bricasti claims that this layout, combined with using a higher impedance material for its boards and locating its clocking circuits only millimeters from the dual DACs, produces a clearer signal with lower noise and reduced jitter.

I tested the M1SE mainly as a dedicated DAC connected to a line-stage Audio Research LS28 preamplifier. Amplification included two Class A amplifiers: a 10-watt First Watt SIT-2 and my reference 30-watt Pass Labs XA30.8. I used Focal Sopra N°1 bookshelf speakers and cables from Wireworld. I also spent time listening to the M1SE through a pair of Audeze LCD-X headphones, driven by a Pass Labs HPA-1 headphone amplifier.

I began my evaluation of the Bricasti M1SE with Amy Winehouse's debut, Frank (Island Records, 24/192). A contemporary R&B artist with jazz roots, Winehouse's voice and lyrics were indelibly unique, and she undoubtedly left her mark before her tragic death in 2011. On tracks such as "Stronger Than Me," "You Sent Me Flying/Cherry," and "Take the Box," Winehouse's vocal modulation and control were presented with exceptional precision. It was easy to hear every breath and nuance in her sultry and smoky delivery. My favorite track on Frank is "Amy Amy Amy/Outro." Here, the background vocals were natural and balanced, presented in a three-dimensional soundstage behind Winehouse, who was featured front and center. The bass was deep and authoritative, even through my Focal Sopra N°1s that only have six-inch drivers.

The Cannonball Adderley Quintet in San Francisco (Riverside, SACD) is one of my all-time favorite jazz albums and a must-have in any jazz collection. A groundbreaking recording in the eyes of many, the outstanding performance recorded at The Jazz Workshop is as much fun to listen to for the music as it is for the subtle nuances from an active and lively audience that demonstrates no shortage of participation. The M1SE played every complex passage exceptionally well, despite the inherent limitations of a recording from 1959. Adderley's tenor saxophone was clear and dynamic, mostly in the left channel, and balanced with his brother Nat's coronet in the right channel. On "Spontaneous Combustion," Adderley's lengthy saxophone solo was explosive. Furthermore, the clapping, finger snapping, and vocal coaxing--"yeah, yeah, yeah ... alright"--during Nat's solo were easily apparent. After the solos, as the quintet converged back on the main riff in dramatic fashion, the crowd showed their enthusiastic approval, a moment that left me with chills.

Talking Heads: 77 (Sire, 24/96) is the band's debut album. While not an initial commercial success, several songs on Talking Heads: 77 have become classics over time--most notably, "Psycho Killer." Throughout the album, the M1SE presented a wide and transparent soundstage that rivaled any of the high-end DACs I've had the pleasure of hearing or evaluating. Compared with the Mark Levinson N° 519 digital preamp/media streamer (currently under evaluation), the M1SE sounded slightly warmer with a more precise delivery. On "Psycho Killer," the electric guitars were presented with strong attack yet delicate decay, and bass was fleshy and deep, but not heavy. As memories of my childhood came roaring back, I found it almost impossible to sit still through "Psycho Killer," especially during the bridge where the energy of the performance climaxes. David Byrne's vocals were clear and articulate, never muddy or indecipherable.

During my time with the M1SE, I also watched several Blu-ray movies in two-channel stereo, including Genius and American Flyers. The bottom line with movies for me is this: no matter how visually appealing the video is or how amazing the sound effects, without a consistently and easily articulated vocal track, a movie simply is not watchable. At no time during either movie did I have trouble deciphering the vocal track, which was also beautifully imaged. My treated listening space helps tremendously in this regard, but it is also a testament to the M1SE's precise, clean, and flawless execution.

High Points
• The M1SE is an elite performer, sitting near the pinnacle of DAC performance. It is without question a reference product.
• The M1SE is built like a tank. The chassis is produced from milled aluminum sections and has laser-etched markings.
• The M1SE is easy to use. It is a feature-rich product. It includes over a dozen preset filters, but I was able to hook up the M1SE and have it producing music in minutes.

Low Points
• The M1SE does not decode MQA. This product is made for digital audio enthusiasts with a deep collection of digital music and/or a subscription to TIDAL, so an MQA update is a necessity. CEO Brian Zolner says that the company plans an MQA update in the second quarter of 2018.

Comparison and Competition
The Bricasti M1SE resides in the realm of no-compromise, cost-no-object, price-no-object DACs. This space has a surprising number of competitive products, many of which cost more than the M1SE--including products from EMM Labs (DA2 Reference, $25,000), Berkley (Alpha DAC Reference Series 2 MQA, $19,500), dCS (Debussy, $10,999), Moon by Simaudio (780D, $15,000), and Mark Levinson (N° 526, $20,000). As of this writing, only the Berkely Alpha 2 decodes MQA; however, it does not have a USB input, and the company requires that consumers spend an additional $1,895 for its Alpha USB product, a USB-to-digital-audio interface with coax and AES outputs.

Conclusion
The Bricasti M1SE DAC easily hangs with competition that costs as much, if not more. It is one of the best digital-to-analog converters that I have tested. If I had to pick a single word to describe the M1SE, I would say "precise." Is it unforgiving of poorly recorded material? You bet it is. However, it will light up your digital audio collection, revealing previously hidden details in an incredibly transparent, analog-like soundstage that is true to the original recording. My Focal Sopra N°1s, with their Beryllium tweeters, were right at home with the M1SE.

I also listened to a lot of high-resolution music through the M1SE DAC with the Pass Labs HPA-1 headphone amplifier and Audeze LCD-X headphones, and I found the sound so intoxicating that it tugged at my wallet in dangerous fashion. If you are among the uber-affluent who can afford a $10,000 digital-to-analog converter/preamplifier, I would encourage you to seek out one of the company's 28 global (six in the United States) dealers/distributors for an audition. You will not regret it.

You'll automatically be entered in the HTR Sweepstakes, and get the hottest audio deals directly in your inbox.
Author
Ben Shyman
HomeTheaterReview Product Rating
Value:
Performance:
Overall Rating:
When you buy through links on our site, we may earn an affiliate commission. Your support is greatly appreciated!