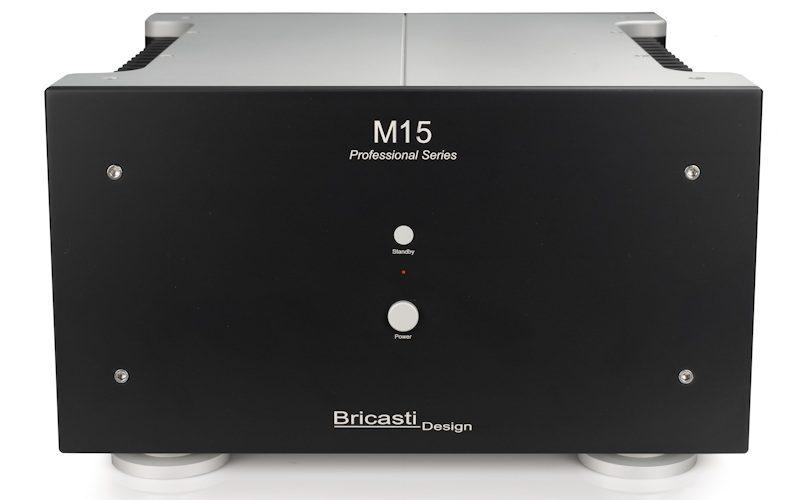 Over the past few years of attending AXPONA (Audio Expo North America) in Chicago, I've found many of the rooms to be audio deserts consisting of tonally dry, overly analytical systems that were too unpleasant for me to stay and... 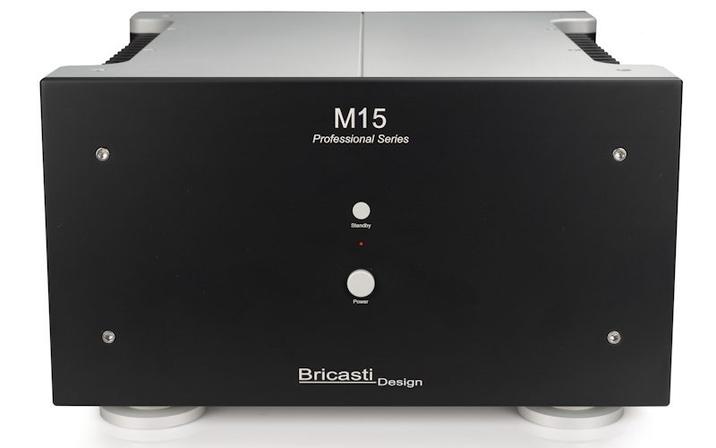 Over the past few years of attending AXPONA (Audio Expo North America) in Chicago, I've found many of the rooms to be audio deserts consisting of tonally dry, overly analytical systems that were too unpleasant for me to stay and listen to even for short periods of time. Contrast that with the Bricasti Design room, which has been an audiophile oasis of beautiful sound, panoramic soundstaging, and an overall musicality that refreshed my musical palate and allowed me to relax and connect with the music. The system I am speaking of was built around Bricasti's own upstream DAC/preamplifier into their M28 monoblock amplifiers.

Roughly a year ago, I had a conversation with Mike Kay of Audio Archon--a Bricasti Design dealer--and Brian Zolner, who is the co-founder and chief designer of Bricasti Design, regarding the development of a single chassis stereo amplifier that could trickle-down most of the superlative performance of the company's M28 monoblocks, which retail for a hefty $30,000. I suggested a price point of around $10,000, which would allow many more HomeTheaterReview.com readers would be able to afford. Whether or not those conversations actually resulted in (or contributed to) the subject of this review, the M15 Professional Series amplifier, I cannot say. But here we are.

The M15 Professional Series amplifier is a $12,000 class AB design that uses a unique and truly balanced topology that was developed for the reference M28 monoblock amplifiers. The M15 delivers 125 watts into 8 ohms, 250 watts into 4 ohms, and 500 watts into 2 ohms. Its reported total harmonic distortion at full rated power into 8 and 4 ohms is a minuscule 0.005 percent. This means that this amp has the power supply to drive virtually any speaker on today's market with ease and clarity. The M15 Pro Series weighs in a stout 100 pounds and stands 10.25 inches high by 16.75 inches wide by 18 inches deep. On the thick front plate in the middle is where the power and standby buttons are located. You also find the name of the M15 Pro Series and Bricasti Design logo laser etched into the black surface of the aluminum faceplate. The black and silver chassis of the M15 Pro Series is CNC machined. Thick plates of aluminum are precision cut to shape, which lead to exact tolerances for a perfect fit. This beast of an amplifier is elegant and classy in its physical appearance.

Around back you'll find your choice of either RCA or XLR inputs, very high quality and easy-to-use speaker wire posts, the ICE input, and a unique trim control. This input trim control can be used to lower the input sensitivity of the M15 Pro Series to match better the outputs of a preamplifier or a DAC driving the amplifier directly.

The Hookup
The packaging in which Bricasti Design ships the M15 Pro Series amplifier is first rate, with double-thick cartons and precisely cut foam inserts that completely protect the amplifier from damage during shipping. I was able to place the M15 Pro Series on my rack by myself. However, to ensure the safety of the amplifier and one's back, I recommend that you enlist the help of at least one other person.


I began my critical listening with Jane Monheit's Taking a Chance on Love (Sony Classical), which served as a good test of the amplifier's ability to replicate the beautiful timbres and tonality of Ms. Monheit's sultry voice, along with spatial qualities such as the size of the soundstage and the placement of her vocals in the middle of a full-sized big band. Those of you who've read my past reviews know that it is paramount for me that an amplifier captures the energy found in live music.

Yes, I want transparency and detail, three-dimensional imaging, an extended and sweet top-end, and percussive yet taut bass. However, if an amplifier dries out the sound of individual instruments, it is a deal breaker for me. The M15 Pro Series was spot-on in its delivery of the voluptuous tonality of Monheit's voice. The amplifier also has an overall liquidity that presents the music with effortless fluidity. Its reproduction of the size of the soundstage and space between individual players on this recording was very life-like and natural sounding.


Next up was Jimi Hendrix's The Essential Jimi Hendrix Volumes One and Two (Reprise) to get a measure of what the M15 Pro Series voice would be on these very dynamic, punchy, and bass-extended studio recordings of the late/great virtuoso of the electric guitar. As I raised the volume control to dangerous levels, as you should with the music of Jimi Hendrix (albeit for short periods of time to decrease the danger of long-term hearing damage), the M15 Pro Series effortlessly drove the 21 drivers (including four 12-inch woofers) of the Tekton Ulfberthts with no strain, and without flattening out the image as I have heard on lesser amps.

The iron fist control of Noel Redding's electric bass lines and Mitch Mitchell's thrashing about on his drum kit were beautifully replicated. Can this amplifier--capable of reproducing delicate and detailed female vocals--do justice to all-out classic rock from its golden era? Absolutely. And with ease.

The Jimi Hendrix Experience - All Along The Watchtower (Official Audio)


Miles Davis' Kind of Blue (Columbia) is one of the most famous jazz recordings of all time, and it makes for a wonderful test of how quiet an amplifier's noise floor is. If an amplifier has a vanishingly low level of background noise, the smallest details pop out of the mix and can be easily and cleanly heard through the music.

The M15 Pro Series uncovered the background noises of random chit-chat between the players, decays from the studio walls, and the sounds of Miles' lips as he repositioned them on the mouth piece during his solos.


My final listening selection was Lee Morgan's The Sidewinder (Blue Note), the largest selling Blue Note Album of all time. The legendary recording engineer, Rudy Van Gilder, was able to capture the brush work of Billy Higgins with such crystalline clarity that the decays just float off until they slowly evaporate into the air.

If an amplifier does not have a very high level of transparency and resolution, this subtle, airy decay pattern can be lost. The M15 Pro Series caught all of these minute decays with utter precision and ethereal grace.

The Downside
When you get an amplifier like the Bricasti Design M15 Pro Series, which offers state-of-the-art build quality, superlative engineering, and voicing that does justice to any genre of music being fed to it, the task to come up with any shortcomings becomes quite difficult. A few caveats worth noting, though: like other reference-level amplifiers, the M15 Pro Series can only pass on what the upstream gear delivers to it. If your sources or preamplifier are not at the same level of the Bricasti Design M15 Pro Series, it will not give you its full sonic potential. It is also a very large amplifier that will not easily fit into most standard racks or stands. It runs mildly warm, not hot, so you could put it into a closed rack if desired. However, its physical appearance is quite handsome, so I would put it on an amplifier stand and let it be seen as the foundation of my system.

The Constellation Inspiration Stereo 1.0 amplifier, for my tastes, comes from what I call the highly resolving/transparent/dynamic school of amplifiers. It does everything right but it just doesn't float my boat the same way the Bricasti does. The Constellation Inspiration Stereo 1.0 amplifier is like a microscope that gives you incredible clarity but lacks some of the soul of the M15 to my ears.

The Gamut Audio 200i amplifier comes much closer to the sound that I like from the M15 Pro Series and delivers accurate soundstaging and a solid amount of current. For me the Gamut falls a little behind the M15 Pro Series' ability to create holographic imaging, and it does not have the ultimate power reserves to deliver the overall effortless dynamics of the Bricasti Design amplifier.

Of all the amplifiers that I have in-house, the $4,995 Pass Labs XA-25 has the most tube-like tonality that conveys the beauty of the timbres I listen for in acoustic jazz and vocals. It, of course, is not a tube amp. It is a Nelson Pass designed Class A power amp. So you have to be a little bit careful with what speakers you pair with the XA-25 with because of its power limitations. The Bricasti M15 Pro Series is the first solid-state amplifier I've heard that matches this exquisite rendering of natural timbres, along with unlimited power to drive virtually any speaker with authority and control.

Conclusion
Do I believe the Bricasti team has accomplished their goal of designing an amplifier that would bring much of the magic of their reference $30,000 M28 monoblocks to the market at a much more affordable price? Absolutely. Bricasti killed it with their brand new M15 Pro Series Stereo amplifier. It's an A-list performer at any price and a downright value for the advanced audiophile shopping in the $10,000-ish price range.

If you want a solid-state design that offers tube-like timbres, image density, and the effortless overall liquidity of tubes, with deep bass extension, transparency that lets the smallest details be heard, and sufficient power to drive any speaker with ease and control, the M15 Pro Series might be the amplifier you want for your system.

Bricasti Design has been an award-winning player in the professional recording industry, specifically regarding their digital gear. Their M28 monoblock amplifiers have won many prestigious international awards but are priced out of the range of all but the wealthiest audiophiles. The Bricasti M15 brings this level of performance down to a point where more audiophiles can dream to own such a wonderful component.