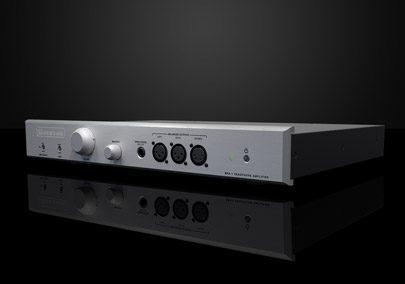 Audio Reviews, Equipment Reviews, Headphone + Accessory Reviews
Published On: February 21, 2013
We May Earn From Some Purchases Via Affiliate Links 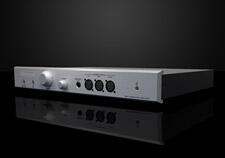 Headphones, if you haven’t heard, are the new speakers. But many headphone users are relying on the pitiful amplifiers embedded in their MP3 players or CD spinners as the primary connection for their headphones. Also, a number of these same listeners are complaining that their headphones lack bass, dynamic drive and detail compared with conventional room-based loudspeakers. The problem may not be with their headphones, but with the headphone amps.

Bryston, which has made bulletproof power amplifiers and preamps for over thirty years, has a solution to the “wimpy headphone amplifier syndrome.” It’s called the BHA-1 ($1,395). Designed to handle everything from 115 dB sensitivity earbuds to 600-ohm professional cans, the BHA-1 may be the last headphone amp you’ll ever need.

The BHA-1 is primarily a headphone amplifier but, as you will see, it can also serve as a minimalist two-channel preamplifier. On the back, you will find three stereo inputs – one balanced XLR, one single-ended RCA and one single-ended mini-stereo input. There’s also one pair of balanced XLR outputs that can be used to drive an amplifier. The balanced XLR output’s level is controlled by the large volume knob on the front panel, which in essence turns the BHA-1 into a preamp. Instead of merely passing a fixed-output line-level signal, the BHA-1 has a variable output level, making it suitable for pre-amplifier duties. The only limiting factor for pre-amp use is there is only one pair of outputs, so if you regularly use a subwoofer, as I do, you will either need to use a splitter to gain a second output, run your signal first to your subwoofer and then to your speaker’s power amplifiers, or use a second pair of speaker cables from your amplifiers to your subwoofer. All three schemes work – it merely depends on your ancillary gear’s inputs as to which will work best.

The front panel of the BHA-1 has a three-way toggle switch for input selection, and a two-way gain switch that delivers either 14 or 20 dB of gain. Other front panel controls include a large volume control knob, a smaller balance control knob, a on-off toggle switch, a single-ended quarter-inch stereo headphone output, a balanced XLR stereo output and a pair of XLR balanced mono L/R outputs. All of the front panel outputs are active at all times. The rear output is also active at all times, even when the headphones are plugged into the front panel. This is somewhat unusual, since most DACs with built-in headphone outputs, such as the Benchmark DAC-2, April Music Eximus DP-1, and the Mytek Stereo 192-DSD DAC, mute their rear outputs when a headphone is attached. When you plan to listen to headphones alone (which is how most people listen), you will need to turn off your speakers’ (and subwoofer’s) amplifiers.

The BHA-1’s volume control deserves a special mention. Most volume controls do most of their work in the first half of their rotation, and the second half does little to increase the volume levels. This is usually referred to as “an audio taper.” The BHA-1 doesn’t use an audio taper. Instead the volume level increase for the first quarter of its rotation is very gradual. Only during the last quarter-turn does the volume level get much louder. While this different taper may take a bit of time to get used to (especially if you are also using the BHA-1 as a preamp), it allows for much finer level adjustments than an audio taper, especially when combined with the two-position gain adjustment switch.

Available in either black or silver finish, the BHA-1 is housed in a full-width 19-inch chassis that has provisions for rack mounting. Its depth is only seven inches, which could make stacking half-width 12-inch-deep cabinets, such as most Stax headphone amplifiers, rather precarious. But there’s an even better reason for not stacking components on top of the BHA-1; it really needs breathing room for heat dissipation. I found that unless I gave the BHA-1 at least two inches of space above and below for adequate ventilation, it could go into thermal shutdown after running for more than half an hour. Turning the BHA-1 off for a few minutes solved the shutdown, but proper ventilation for the BHA-1 is a must, unless you enjoy periodic musical interruptions.

Read more about the Bryston BHA-1 headphone amp on Page 2. 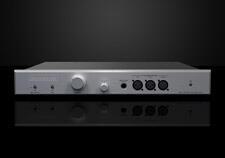 On the other end of the earphone spectrum, the BHA-1 works okay, but not perfectly, with high-sensitivity in-ears, such as the Etymotic ER-4p. I noticed the faintest hum/buzz with the ER-4p, but with the S-filter cable installed, the buzz dropped below imperceptibility. With the Sol Republic HD-Tracks headphones (104 dB sensitivity), the buzz/hum was slightly louder than with the Etymotics, but with most music playing, the noise was virtually impossible to hear. Only with classical or jazz sources that contained very low-level music or periods of silence was the buzz still noticeable. The 105 dB sensitivity V-Moda M-80 over-ear headphones also had a slight hum/buzz of similar intensity to the Sol Republics. So, if you plan to u
se headphones or earphones with anything near or over 104 dB sensitivity, you can expect to hear some small amount of noise.

With all the headphones in my arsenal that had a sensitivity of less than 98 dB, I heard nothing but silence from the BHA-1, even with the gain set on high and the volume control turned all the way up. With popular headphones such as the Sennheiser HD-600 or the Audio-Technica ATH-A900X, the BHA-1’s background noise was nonexistent and it had more than enough gain, even on the low gain setting, to play louder than any sane person would need.

My favorite cans with the BHA-1 proved to be the Grado RS-1s. It was the first time I really “got” the RS-1s. I’d always like their sound, but at times they lacked the dynamic drive of other earphones, such as the Beyer Dynamic DT-990s. However, tethered to the BHA-1, the Grados had a greater level of dynamic contrast and bass extension than I’d ever heard before. I liked this combination so much that I sent the RS-1 to Moon Audio to be re-terminated with a true balanced connection. The results elevated the Grado RS-1’s performance even further. The only headphone in my collection that came close to the performance of the Grado RS-1/BHA-1 combo was the Audio-Technica ATH-W3000ANV headphone. The BHA-1’s excellent bass control that kept the ATH-3000ANVs overly robust midbass in check, while still allowing it to bloom when the music demanded.

Low Points
The BHA-1 is prone to thermal shutdown if not properly ventilated.
With higher sensitivity headphones (equal to or greater than 100 dB), the BHA-1 generates a small amount of hum/buzz.
The balanced outputs on the back of the BHA-1 are always active, so if it is hooked up to an amp or powered speakers, they must be turned off for headphone-only listening.
The balanced outputs offer optimum performance, which may force users to rewire their single-ended termination headphones for balanced operation.

Competition and Comparisons
Although there are many headphone amplifiers in the market, few have the features and performance of the Bryston BHA-1. Most less-expensive headphone amplifiers lack multiple gain settings and balanced output options. At its approximate price range, there are other options, including the fully-featured Schiit Mjolnir ($749), which uses a single-ended tube-based output, but supports only balanced headphone connections. The Burson Soloist ($999) offers three different gain level settings, but it only supports single-ended inputs and outputs. For more on these amps, as well as headphones in general, please visit Home Theater Review’s Headphone page.

Conclusion
Given the recent explosion of headphones and headphone-related components, anyone in the market for a headphone amplifier is faced with a dizzying number of fine headphone amplifiers from which to choose. However, few headphone amps offer the level of versatility, fine sound, input and output options, and overall rock-solid reliability of the Bryston BHA-1. Combine it with a good fixed-level DAC and you have the makings of a most excellent desktop playback system.