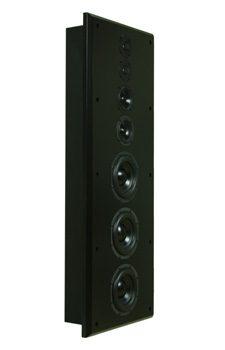 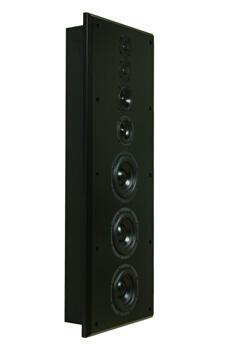 Bryston has introduced an in-wall version of the Model T floorstanding loudspeaker. The Model T Cinema Reference in-wall uses seven drivers in a three-way configuration, and the cabinet design includes an inert 1.5-inch-thick front baffle and solid 0.75-inch back box. Bryston says the speaker is capable of 120 dB of output without dynamic compression. Pricing has not yet been announced.

In order to achieve the desired performance goals from an in-wall speaker system, Bryston employed seven drivers in a three-way configuration capable of up to 120 dB of output without dynamic compression–all while maintaining exceptional clarity and tonal neutrality. Most in-wall loudspeakers sacrifice power response when submerged within a wall; however, Bryston has overcome these limitations by placing the drivers on a robust baffle slightly forward of the wall’s surface, enabling the Model T Cinema to deliver a more realistic soundstage, precise imaging and superb dynamic capabilities.

Since their introduction in 2012, many top theater designers have chosen the Bryston’s Model T floorstanding loudspeakers to anchor dedicated home theater systems for their clients worldwide. Now the same astonishing dynamic realism and tonal neutrality of the Model T can be built into the wall with the Model T Cinema.

“The Model T Cinema is a sealed design featuring an inert 1.5-inch-thick front baffle and solid 0.75-inch back-boxes to ensure superb midrange and high-frequency detail along with unwavering control in the bass region while minimizing transmission of sound into other rooms,” explained Bryston’s James Tanner. “Our engineering team is working on compatible products such as an in-wall Cinema center, surrounds and subwoofers, providing theater designers and professional integrators with a complete in-wall system only available through authorized Bryston dealers,” said Tanner. All Bryston Cinema loudspeakers are covered by the company’s legendary 20-year warranty.