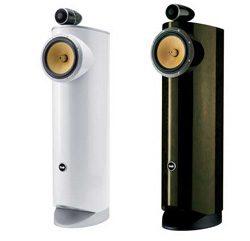 When a speaker maker like B&W makes a signature diamond model you have to expect the best. From the design and attention to detail of the cabinets to the sound produced by them I want it all. To see if these will meet all your needs. Click here for a full review. 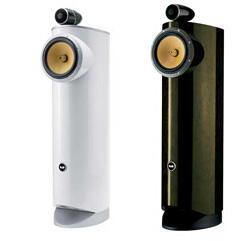 A sea-change is affecting high-end speakers. It’s a result of manufacturers realizing that the only way they’re going to get decent sound into rooms where aesthetics matter is to design pretty speakers. In a nutshell, custom installation and hidden speakers have taken over an entire world ignored by and unknown to audiophiles: wealthy customers who can actually afford the stuff we dream about. They simply don’t want to see the stuff.

But we, the hobbyists, know that the instant a speaker goes in the wall, the sound is compromised beyond recovery. So this admirable action from commercially savvy manufacturers is about the survival of standalone primary speakers in serious sound systems not owned by audio enthusiasts.

Briefly, we all know that brands like Sonus faber, MartinLogan and a couple of others are default recommendations when someone asks about “speakers that won’t make my wife/interior decorator throw a hissy fit.” Even more exciting of late to the house-proud, moneyed gadget lover are visual “statements” in which the looks have been as much a reason for purchase as the sound; these include the original, snail-shaped B&W Nautilus and the new KEF Muon. But something else has been added to the recipe, an idea borrowed or inspired by other luxury goods, such as watches and cars: limited edition status and the inherent status of cost-based exclusivity.
Competition and Comparison
You can compare B&W’s Signature Diamond loudspeakers against their competition by reading our reviews for the MartinLogan Purity Hybrid electrostatic loudspeaker and the Paradigm Reference Studio 100V4 loudspeakers.  You can also learn more by visiting our Floorstanding Speaker section and our B&W brand page.

This preamble is necessary if you’re to put the Bowers & Wilkins Signature Diamond into the correct context. While at no time am I suggesting that performance has been regarded as secondary by B&W at any stage in its creation, there is no doubt that much of the appeal – and justification for the outrageous price – will be a direct result of the limited production of 1000 pairs, 500 each in white or Wakame wood, and intrinsic exclusivity of a price that serves no other purpose than to affirm said prestige. And it doesn’t hurt if a well-known industrial designer, in this case Kenneth Grange, has his or her hands all over the form.

B&W developed the Signature Diamond to mark its fortieth anniversary. Some brilliant copywriter came up with this statement, which you just have to love for its delightful cheek: “Yes, we know; diamonds should be reserved for sixtieth anniversaries. But then, were it not ahead of its time, it wouldn’t be a B&W speaker.”

So, regardless of the effort lavished on the form, the stunning finish, the materials and the pleasing shape, this boasts enough of the right stuff to tempt audiophiles: a diamond vapor deposit on the dome tweeter, the seven-inch woven Kevlar bass/midrange driver, the signature detail of an utterly inert, solid sculptured marble, free-standing housing for the tweeter. Make no mistake: this is far more than a cosmetics job.

In addition to the tweeter housing, which stands like a car mascot from the days before the health ‘n’ safety nannies made them illegal, the most distinctive and eye-pleasing element of the Signature Diamond is the non-boxy enclosure. While hardly radical – the shape has an egg-like cross section, tapering to the back – the compact dimensions and exquisite finish transform it into what a speaker of this elevated cost must suggest: sculpture.

It is made of formed plywood, it employs B&W’s trademark Matrix innards and it is finished as nicely as anything I’ve seen – at least, the white ones are. I’ve not yet viewed the Wakame finish in person, but if it’s anything like the woodwork on B&W’s other upscale offerings, then none can fault it.

If anything jars about its physical presence, it has to be the size. I know, I know: we should focus on quality, not quantity. But a system of
eight 930 x 230 x 375mm (H/W/D) falls into the small floor-stander category. Whatever way you judge it, that simply doesn’t sound like an £11,000 per pair speaker, and it’s an observation that can be leveled at many of the Signature Diamond’s rivals.

(Note from a worried Ken Kessler: The matter of “perceived value” is contentious and always will be. I’m just trying to address the way consumers respond to price tags. Someone who wouldn’t balk at paying £75 for a mere mouthful of foie gras would freak out at spending £45 on a burger, even if made from Kobe beef. So, it’s my belief that normal people would expect an £11,000 speaker to be massive. Not that normal people would even accept the mere notion of an £11,000 speaker …)

Dr John Dibb, who designed anniversary models for the company’s twenty-fifth and thirtieth, made sure that the sound was commensurate with the styling, and he visited my listening room to ensure that I would hear what he heard in his laboratory. Dibb is responsible for the use here of a newly-designed silver wire, hardwired in the crossover to match the silver/gold foil crossover components. He oversaw the shaping of all components, including the flow of the port in this two-way design, and it’s clear he “voiced” the system. You’ve just gotta listen to a man who recognizes Billy Cotton in under a single revolution of the LP.

On paper? No knowledgeable audio enthusiast would show shock at a frequency response stated as -6dB at 32Hz and 33kHz, or 40-28kHz ±3dB on axis. Power shouldn’t be an issue for someone shopping in this sector, so sensitivity of 88dB – what is now deemed low to medium – is no cause for fear.

Dr. Dibb set up the speakers with medium toe-in, and they were driven at various times by the Quad II-eighty and the McIntosh MC2102, with the Quad 99CDP II CD player/preamp, the McIntosh C2200 preamp and an analog front end of SME 30/Series V arm, with an Air-Tight moving coil cartridge, into the Audio Research PH5 phono stage. Wiring was Yter throughout.

If a single trait can endow a speaker with enough credibility to render it truly noteworthy, then – for me, at least – the B&W’s portrayal of sheer scale is the standout element. No kidding: you’d be forgiven for thinking that the wall-to-wall/floor-to-ceiling span of the soundstage was coming from a well-developed dipole. The issue of free-standing tweeters and their superior dispersion finds an inarguable exponent here. With the gloriously huge-sounding performance of t
he aforementioned Billy Cotton spreading across the room, you could hear the hall in which it was recorded in all of its cavernous glory.

As with other high-end B&Ws I’ve heard, the detail and speed of the treble reproduction was ideally suited to producing convincing applause in this live recording. Equally, a bout of Nils Lofgren in full-on string-torturing mode exposed attack that I have no hesitation in regarding as utterly world-class. Impact, body, controlled decay, no overhang – seriously cutting-edge.

Indeed, the only concern I have is strictly personal: I found it at times a bit too sharp and too edgy, though neither more nor less sibilant than I would accept at this level. Well-recorded voices, as much as electric guitar, revealed this tendency, injecting just enough over-etched artifice into the soaring vocals of Jackie Wilson’s “Doggin’ Around” to suggest some sort of lift in the upper reaches.

This, however, is to me a B&W trait which endears the speakers to its more vehement supporters (who would argue that it’s more accurate than everything else, and I am deaf). Conversely, the bass is so rich and full and solid that I can only marvel at such sheer scale and quantity from such a small enclosure. The way it handled the opening bass and drum component of the Four Season’s “Walk Like a Man” thrills and delights. And yet … for half the money, the prettier Sonus Faber Cremona M outperforms it in every parameter.

But these are not issues that will concern the target consumer, any more than fuel consumption figures cross the lips of the potential owner of a Bentley, nor worries of cancer affect the buyer of a big, fat Cohiba. What we see here is a terrific speaker wrapped in a gorgeous enclosure, the potential client having to accept that things like marble tweeter housings add to overall cost.

With any speaker where cosmetics are as important as sound, there are invariably compromises between the two. Sonically, scale and detail are world-class, bass is generous, but there’s an identifiable trace of edgy “hi-fi” artifice, even with tubes. By loony audio standards, this is a 6000 speaker in a 5000 frock … albeit a limited-edition, name-designer ‘objet.’ But for those to whom status matters, the sound/looks balance isn’t an issue.

Style Vs. Substance
It’s easy for audiophiles to be snobby about the need for gorgeous cabinets to seduce customers not impressed solely by sound. But that’s why high-end audio has always struggled in the face of other luxury goods. Even allowing for the most extreme examples of odd personal taste, there is no such thing as an ugly Ferrari or a cheap-looking high-end watch. But cars are on the road, watches go on the wrist: speakers take over the room they’re filling with sound.

I speak from personal experience of well-heeled music lovers torn between sound and looks. In my opinion, B&W has, with this speaker, tipped the balance of the two in favor of the speaker as an objet d’art. But it still qualifies as a serious high-end speaker. You just have to accept that good looks cost money, and that means using name designers. Kenneth Grange for B&W, Ross Lovegrove for KEF – wise choices. But God forbid someone calls on Tracey Emin or Damien Hirst.

You'll automatically be entered in the HTR Sweepstakes, and get the hottest audio deals directly in your inbox.
Subscribe
Connect withD
Login
Connect withD
0 Comments
Inline Feedbacks
View all comments
Author
Home Theater Review
HomeTheaterReview Product Rating
Value:
Performance:
Overall Rating:
When you buy through links on our site, we may earn an affiliate commission. Your support is greatly appreciated!
This is the static ad content. This is just a placeholder for now to get things styled.
Visit Website