Can Dolby Atmos Actually Work on a Laptop?

Can Dolby Atmos Actually Work on a Laptop?

We all know what Dolby Atmos sounds like with a roomful of speakers. But can the technology actually add anything to the experience of listening on laptop speakers or a good set of cans? 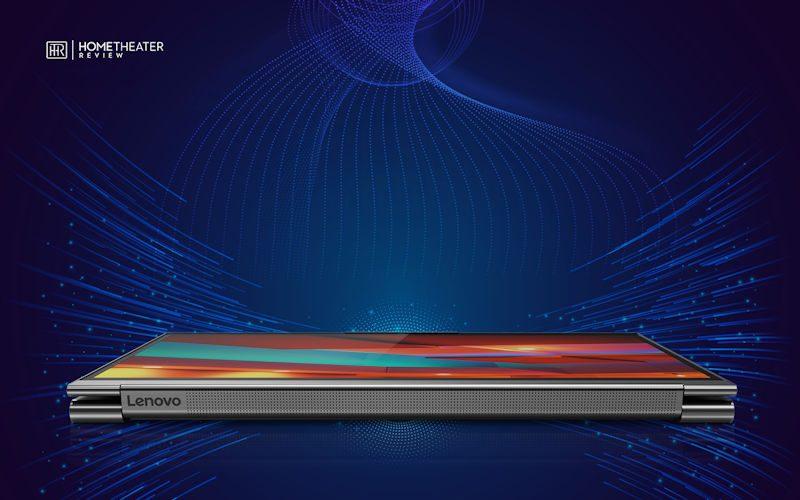 A friend of mine saw a reference to a Lenovo laptop that included a Dolby Atmos system. He called me and asked, "How can this work? I'm certainly interested, but my experience of Atmos has been in movie theaters with scads of speakers, including in the ceiling. This just seems to have a soundbar."

The short answer is that what is now called "immersive audio" works. It's not magic, and the ambition is not new. It has long been the goal of home and theatrical entertainment providers to deliver a more involving and realistic experience to their audiences. Dolby Atmos, DTS:X, and similar systems are the latest attempts to do so in the audio domain.

But, as with my friend, you may be wondering if these three-dimensional sound formats can really work without the benefit of a roomful of speakers. I confess that I also was intrigued, and thanks to Lenovo I spent a recent weekend putting the company's Yoga C940 laptop and its onboard soundbar (along with a pair of over-ear headphones and a set of earbuds) to the test, to see how it would compare with a full-fledged in-room sound system.

Historically, Dolby has done great surround demo trailers, so the first thing I did was check several of them out. The three demo trailers that stand out are a rainstorm, a thunderstorm, and a line-drawing animation of a basketball passed around the court of your imagination and then going to a backboard and dropping through the hoop. Fun! All three demonstrated the full "dome" effect of the Atmos system. In the rain demo, I almost felt my hair getting wet as the drops came down all around me. The thunderstorm added a lightning visual and thunder in various locations – behind, in front, and right over me.

Demos, of course, are designed to show off the qualities their creators and sponsors want. What about content not specifically aimed at that target? Content in which Atmos is just another element among many? My listening included musical selections and movie trailers, as well as randomly selected bits and pieces of full movie presentations.

Trailers are often the best part of a two-plus hour movie-watching experience. So, it's not really surprising that the trailers done with Atmos pack a punch. The interesting thing is that Atmos enhanced most of what I auditioned – sometimes subtly, sometimes dramatically.

In the animated short film "Escape," the Atmos processing adds a sense of height as well as depth, so the feeling of enclosure and release is more effective. In the "Universe" Atmos demo trailer, I felt hugged by many of the images I saw, and yet some of the sound appeared to be coming from a sheaf of papers more than a foot to the left of my screen.


As for movie trailers, Aquaman and Bohemian Rhapsody stand out for me. In the underwater section of the former, I not only heard the water all around me, globally, but I could have sworn I felt the water pressure in my ears. The Bohemian Rhapsody trailer delivers a heightened – pun intended – sense of what being on stage for a stadium concert is like.

The idea of being in the middle of something, a part of something, is advanced with Atmos, regardless of the genre of content. The most dramatic expression of this form of immersive experience was with the headphones, followed by the ear buds, with the built-in soundbar providing a more than credible and enjoyable experience, as well.

Years ago, there was a commercial for tomato paste that asked, "How do we get eight great tomatoes in that itty-bitty can?" An up-to-date version might well ask, "How do you get surround, let alone 3D immersive surround, from a pair of cans or a soundbar bit longer than a couple of hot dogs?" The answer involves software, product design, and the expectations of the human brain. The mind, they say, is a terrible thing to waste, but it's also capable of playing some mighty powerful tricks.

By using software, Atmos is effective even with headphones or 'buds not specifically designed for the application. Likewise, the soundbar accompanying the Lenovo laptop was designed, with the assistance of Dolby engineers, to distribute the sound to accommodate the effect. And the mind does the rest. (For a technical explanation of immersive audio and how it works with headphones, see Mark Waldrep's series on the subject. The first installment is here.)

Of course, Atmos, DTS:X, and the other new object-based surround technologies are evolutionary, not revolutionary, developments. It has long been the goal of home and theatrical entertainment providers to deliver a more involving and realistic experience to their audiences. Just as the jump to motion picture widescreen formats in the 1950s – the anamorphic Cinemascope, the non-anamorphic VistaVision, etc., and then Cinerama and 3D – were all designed to pull the audience into the action, sound took a quantum leap forward with the development of stereo, and the decades since have seen advances, some small and others significant, as analog progressed and digital technology made manipulation of sound faster and easier and at the same time more complex.

Digital technology, for example, allowed for the development of the first incarnation of Yamaha's groundbreaking Digital Soundfield Processing, found in the company's DSP-1, a six-channel audio processor that recreated the acoustic characteristics of actually sampled venues. The DSP-1 had many, many, audio settings – and one for Dolby Surround. And the technology that the unit contained guided Yamaha in building a series of incredibly flexible home theater amps and receivers. By varying the sound environment, the home theater enthusiast could change the viewing experience.

Circling back to laptop surround technology, in 2000 Yamaha introduced a receiver designed for use with a desktop computer. It was a full audio product intended to be used with left and right speakers flanking the screen. The receiver had a "Virtual Dolby" setting that provided a believable surround experience in the near-field environment. Whether via cans or stereo speakers, the universe of sound seemed to become more enveloping, more involving. The effect was not necessarily dramatic, but it was – for me at least – present. And sometimes in a way I could not define any better than, "It sounds fuller." But we've come a long way since then.

Nearly three years ago, Huawei's MateBook X was the first laptop to include Dolby Atmos. But in terms of major players in the U.S., Lenovo has aggressively taken the lead. The company has several models featuring the technology, each with a feature set and price point attractive to specific market segments. DTS:X is now forcefully promoting its Windows 10 upgrades and Apple has gotten into the immersive field as well. I suspect that other applications will follow less dramatically. Motion pictures have already had a chance to experiment with the new tool and move sound in a different way than previously possible. And there is clearly an opportunity for the recording engineer in concert videos, opera, and audio-only music. It may take some time for the folks behind the consoles and computers to figure out exactly how to best use their new tool, but I am confident that object-based sound is here to stay – and it doesn't require a roomful of speakers to enjoy it.

Years ago, when I was hawking Quad (I handled public relations and advertising for a Sansui matrix-quad system in the 1970s), one of my audio friends propounded a theory of diminishing impact. He argued that stereo was a 100 percent increase and improvement over mono, and that Quad represented a 25- to 35-percent enjoyment benefit over stereo, etc. So, in the days of quickly multiplying speakers (or, in the case of virtually processed audio, channels), a couple more may not look or sound like a "stop the presses" event.

Nonetheless, "object-based" sound is an advance. It may not be a quantum leap, but it is clearly a step along a probably infinite road to complete and perfect virtual reality. It works, it adds enjoyment (and therefore value), and I strongly suspect that within a few years all laptops and mobile devices will include some form of it. For those not quite ready to invest in a new laptop, Dolby Access and the DTS Sound Unbound apps are available for Windows 10 download. You get the technology, but not the specifically designed soundbar that makes the open-air listening experience more intense. But if you have a good set of headphones and want to explore what this sort of technology has to offer, you can download the apps here and here.

You'll automatically be entered in the HTR Sweepstakes, and get the hottest audio deals directly in your inbox.
Author
William Kanner
When you buy through links on our site, we may earn an affiliate commission. Your support is greatly appreciated!