There is a new offer coming to movie theaters - the Super Ticket. The ticket includes a lot of treats with admission to a movie at a theater, including a copy of the movie. Is this brilliance or desperation? 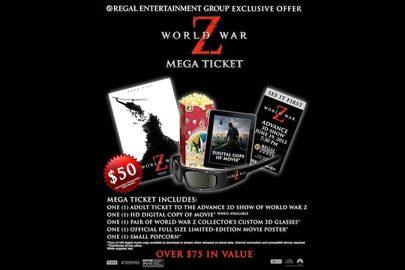 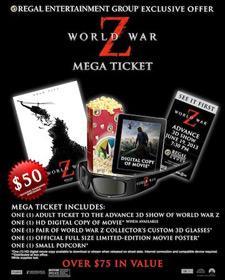 The marriage of movie studios and movie theaters is going through a rough patch. The honeymoon is over. The bloom is off the rose. Irreconcilable differences abound. However you want to say it, the core issue is one of fidelity. While the movie studios still love the theaters, the temptation to explore new patterns of film distribution is growing stronger every day, and changes in the home entertainment industry are largely to blame. The rise and increasing affordability of HDTVs, DVD/Blu-ray players, and multi-channel speaker systems continue to encourage some people (myself included) to avoid the hassles and expense of the theater for a more intimate and controllable movie experience at home. At least we hardcore home theater types still buy and/or rent discs (in my case, Blu-ray discs) to watch at home, which keeps the studios happy. More disruptive has been the meteoric rise in popularity of video-on-demand services, especially subscription services like Netflix and Amazon Instant Video, that can affect both box-office and home-video sales. This has surely gotten the studios’ attention.

I’m not sure if you’re aware of this, but movie studios like to make money on the films they release. In a perfect world, every film would make a lot of money both at the box office and in its afterlife on home video. Some films do. For all the recent talk of dwindling sales, 2012 broke the record for movie-ticket sales, pulling in over $10.84 billion in the United States. Of course, 2012 was the year of The Avengers, The Hunger Games, The Dark Knight Rises, Skyfall, and Twilight: Breaking Dawn Part 2. Films like these will likely do well on the home video side, as well. Other lower-profile films won’t fare so well, and it’s the studios’ job to figure out how to get more eyes (and dollars) on their complete roster of films. The popularity of video-on-demand has opened up new possibilities that allow the studios to experiment with different timetables for the release of films to the home video market, in both disc and digital form.

One experiment has been to shorten the window between a major film’s theatrical release and its arrival on disc and/or VOD. Back in 2011, several major studios launched a premium VOD service in conjunction with DirecTV. For $20 to $30, you could watch a major release about 60 days after its theatrical release, a time when many films are still making the rounds in local theaters. Naturally this raised the ire of major movie-theater chains, but consumers’ response to the initial launch of premium VOD was lukewarm at best, which helped ease tensions a bit. A calm in the midst of the inevitable storm, perhaps.

In some cases, the window between a film’s theatrical release and its disc/VOD debut is now nonexistent. It’s becoming increasingly common to see smaller films arrive on VOD/disc almost at the same time as the theatrical release in hopes to appeal to both the theatergoing and stay-at-home crowds. The theater chains worry that this will encourage more people to stay home instead of going to the movies; the studios counter that most people weren’t going to see that particular film in the theater in the first place, but they might be willing to pay to watch it at home.

Another avenue for studios and independent filmmakers alike is to introduce a film directly through VOD channels. Direct-to-video releases are nothing new. In the past, they’ve usually been reserved for titles that were considered subpar and not worthy of a theatrical run, but that’s no longer the case. There’s less stigma associated with debuting a smaller film through video-on-demand, in hopes that a successful showing may even inspire a theatrical run that will benefit both the studio and the theaters.

If you’ll allow me to keep the metaphor going, the latest experiment in marital counseling to try to keep both parties happy involves offering a home-video incentive at the time of the movie-ticket sale. For Canadian moviegoers who went to see the recent release of Pacific Rim, a partnership between Warner Brothers and Cineplex Theaters in Canada gave them the option to buy a Super Ticket that included theater admission and access to a digital Ultraviolet-compatible copy for $19.99 (SD) or $24.99 (HD), along with the promise that you would get your digital copy and access to other exclusive bonus before anyone else. After seeing the film, moviegoers could go to the Cineplex Store to redeem their Super Ticket voucher and sign up for the digital goodies. Paramount and Regal Theaters tried a similar promotion with World War Z, offering a $50 Mega Ticket that treated you to an early 3D viewing of the movie, an HD digital copy, a pair of collectible 3D glasses, a movie poster, and popcorn. This is an interesting approach because you’re essentially asking the ticket-buying audience to gamble on whether or not they’ll like the movie enough to want a future digital copy. Cineplex wisely allows you to upgrade a regular ticket to a Super Ticket after seeing the movie, which takes some of that guesswork out of the equation. I haven’t seen any sales numbers yet on the Super Ticket; the World War Z Mega Ticket promotion was limited to five theaters and seems to be considered a success, in that a decent number of people showed a willingness to spend more money upfront to get the extra perks.

Just as the rise of the digital music download forced the music industry to completely reevaluate its methods of promotion and distribution, the movie industry now faces the same challenge to adopt, adapt, and improve. It’s clearly taking a toll on relationships that were once seemingly an indestructible match. At the same time, it presents new and interesting opportunities for us movie lovers, so you won’t hear me complaining.

What do you think? As the owner of a home theater system, do you still go to the mo
vies and/or buy discs? Have you embraced the various VOD options? What do you think of these new “Super Ticket” promotions? Would you be willing to pay more money upfront for an early screening and/or early digital copy of a blockbuster film release? Share your thoughts in the Comments section.