Can hi-res audio gain traction with the masses? The genre is certainly picking up steam in the enthusiast space, but will it cross over to the mainstream? The recent announcement of Neil Young's PonoMusic hi-res music service and player got...

Can hi-res audio gain traction with the masses? The genre is certainly picking up steam in the enthusiast space, but will it cross over to the mainstream? The recent announcement of Neil Young's PonoMusic hi-res music service and player got more people talking about the category. Even if the talk wasn't 100 percent positive, at least people were discussing the merits of hi-res audio, and that's what needs to happen right now. A large portion of the younger music-buying public may not even realize that you can do better than iTunes/Google/Amazon download quality, so the task at hand is first to educate and then to expose consumers to a better-sounding option. The question is, if you sell it, will they buy it?

Sony is one company that's been very aggressive in its promotion of hi-res audio over the past year. The company recently invited members of the press to San Diego for a Hi-Res Audio event, in part to introduce a new lineup of Hi-Res Audio products (more on that in a second) but also to have a meaningful dialogue about the state of the category: where it's at, where it's headed, and how best to get there. To that end, Sony also hosted representatives from Universal Music and from the Digital Entertainment Group, which is trying to help formalize a clear set of standards and common terminology for hi-res audio.

If you're new to the hi-res audio discussion, let's get you caught up. In the immortal words of Inigo Montoya, "Let me explain...no, there is too much. Let me sum up." The standard CD has a resolution of 16-bit/44.1-kilohertz (or 1,411 kbps). Rip a CD into the AIFF or WAV format, and you'll get a bit-for-bit copy of that disc at its full quality, with a fairly large file size to go with it. A four-minute song in the AIFF format has a size of about 40 MB. Formats like MP3, AAC, and WMA compress the music to save space at the expense of sound quality. The same four-minute song in MP3 format may have a size around 4.5 MB, depending on the amount of compression (in iTunes, you can choose anywhere from 16 kbps up to 320 kbps).

The music downloads offered on sites like iTunes and Amazon are not offered at full CD quality. They, too, are compressed to allow for faster downloads – as is the music streamed over Pandora, Spotify, Beats Music, and the like. Compression schemes have gotten better, and there are now "lossless" compression options like the Free Lossless Audio Codec (FLAC) and Apple Lossless Audio Codec (ALAC) that claim bit-perfect copies at roughly half the file size with no loss in sound quality. Still, we're talking about everything in relation to a CD-quality resolution of 16/44.1. 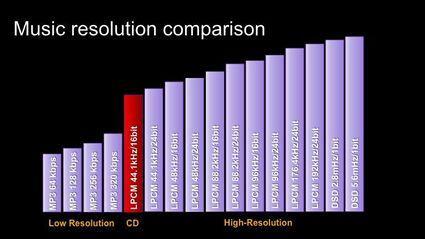 If you take a look at the Music Resolution Comparison graphic that shows a sampling of available resolutions, you can see that CD quality is not the best the industry has to offer. There are music sources out there offered at better-than-CD resolutions ranging from 24-bit/44.1-kilohertz up to 1-bit/5.6-megahertz. Which ones are technically "hi-res"? There's some debate on that, which is one of the standards the DEG is trying to formalize. Sony defines hi-res audio as anything better than CD quality.

On the disc side, the DVD-Audio and SACD formats offer stereo and multichannel music at higher-than-CD resolutions, and some hi-res music is offered on Blu-ray disc, as well. This genre isn't exactly thriving, but you can still buy these discs and play them on any universal disc player, like Oppo's popular lineup.

The future of hi-res audio, though, are digital downloads and streaming services. A handful of websites already exist that allow you to download higher-resolution audio, including HDTracks, Acoustic Sounds, Blue Coast Records, and iTrax.

PonoMusic represents another addition to this collection of hi-res audio download sites, carrying with it the weight of a well-known, highly respected artist in the music industry. The more industry stalwarts we get talking about hi-res music, the more education takes place. One part of Sony's long-term plan is a more aggressive Hi-Res Audio marketing campaign using its own arsenal of Sony Music artists, including Sting, John Mayer, and others.

For more on Sony's hi-res offerings and the issue of finding hi-res content, click over to
page 2 . . . 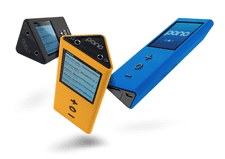 When asked for their take on the PonoMusic announcement, Sony executives were pleased that Pono will be an open, non-proprietary system. If you purchase a hi-res file through the Pono service, playback is not locked to the Pono player; it will work on any playback device that supports the FLAC format. Sony stressed multiple times during the event that universal compatibility is the key to the success of hi-res components. Don't complicate the process by developing products that are only compatible with a limited number of formats. Sony's current HAP-Z1ES and HAP-S1 hi-res servers will play anything from MP3, WMA, and AAC all the way up to uncompressed PCM and DSD, and that's the company's mantra across the Hi-Res Audio lineup. Let the content producers choose whatever hi-res format they want to work in; the manufacturer's job is to make sure the products can play it.

Yes, the irony is not lost on us that these words came from Sony, a company that has never shied away from a good format war. Even though they won the Blu-ray war over HD-DVD, the SACD v. DVD-Audio war pretty much ended in a draw, as the potential for widespread adoption of either format was crushed by the arrival of the MP3. Sony now understands that the health of the high-end audio industry is dependent upon everyone playing nicely and working together to promote the technology.

But what about the content? Several of the major record labels – including Sony, Universal, and Warner – feel that the U.S. market is primed for hi-res audio adoption and have committed to offering more content in these higher-resolution formats. Universal Music representative Jim Belcher provided a very interesting overview on the state of the music industry, both here and abroad, to help explain why. Not surprisingly, most every major market is moving toward digital as opposed to physical discs, but not at the same pace. Of the five major music markets in the world, the United States is the only one where digital revenue (which includes downloads and streaming) surpasses physical disc revenue. I was especially surprised to learn to that, of those five markets, Japan had the lowest amount of digital revenue: 80 percent of Japan's 2013 music revenue still came from physical disc sales, with 16 percent from digital. Compare that to the U.S., in which 30 percent of the revenue came from physical disc sales and 60 percent from digital. Within that huge digital market in the U.S., 67 percent of revenue came from downloads, 19 percent from subscription streaming services (the largest growth area), eight percent from ad-supported streaming services, and five percent from mobile streaming.

Given how mature the U.S. digital market has become, Universal and Sony's digital divisions both feel that the market is ready for the next evolution in digital - namely, hi-res downloads and especially hi-res streaming. Internally, the companies are educating producers, engineers, and artists about hi-res audio's benefits and its potential as a revenue stream. But that's where we run into the age-old "chicken versus egg" challenge. To prove to the content producers that embracing hi-res audio is a worthy endeavor, the market needs to generate revenue. But how does the market generate revenue without mainstream content to sell? The hi-res download sites I mentioned above are great, but they aren't exactly loaded with offerings from today's hottest, most mainstream artists. What the category needs is for even a couple major players to have that hi-res audio epiphany and encourage their fans to do the same. Someone get Jay-Z on the phone.

A recent post on MacRumors also suggests that Apple may add hi-res audio downloads to the iTunes Store very soon, which would obviously be a huge boon to the category if it proves to be true.

Sony referenced a CEA study conducted a few years back in which 90 percent of consumers said that sound quality is the most important thing to them, and 60 percent said they would be willing to pay more for it...but not at the expense of convenience. In the past few years, we certainly haven't seen those statistics played out in the marketplace, where audio has taken a back seat to video (perhaps "tied up in the trunk" is a more accurate description). Can hi-res audio successfully combine quality and convenience at prices that will spark meaningful change? We must hope so.

Sony is trying to do its part with a diverse Hi-Res Audio lineup targeted at a wide range of price points. We've already seen from them higher-priced products targeted at the enthusiast market, like the $1,999 HAP-Z1ES or $600 PHA-1 headphone amp. During the event, the company introduced two new AV receivers to the Hi-Res Audio line, including the STR-DN1050 ($599) that supports playback of resolutions up to DSD and the STR-DN850 ($499) that supports up to 24/196 WAV/FLAC. These 7.2-channel receivers are fully loaded with the latest video, audio, and networking features, including hi-res-capable USB ports, built-in WiFi, AirPlay, and Bluetooth. You can get more details here.

It's been eight years since Sony refreshed its Core Series speakers, and the new lineup includes the floorstanding SS-CS3 ($239 each), the SS-CS5 bookshelf speaker ($219/pair), the SS-CS8 center channel ($169 each), and the SA-CS9 subwoofer ($239 each). The company utilized technology from the higher-priced AR and ES lines for these lower-priced designs. We received a demo of both hi-res audio and Blu-ray movies using the STR-DN1050 receiver and a complete CS speaker system, and it was quite impressive for the price. All the new products will be available this month. Needless to say, we'll be reviewing some of them to provide a more comprehensive evaluation, but it certainly seems like the company is on the right track in its goal to introduce hi-res audio compatibility and performance to a wider audience.

What do you think about hi-res audio? Have you embraced it? If not, what's holding you back? Do you think it can become a mainstream option? Let us know in the Comments section below.