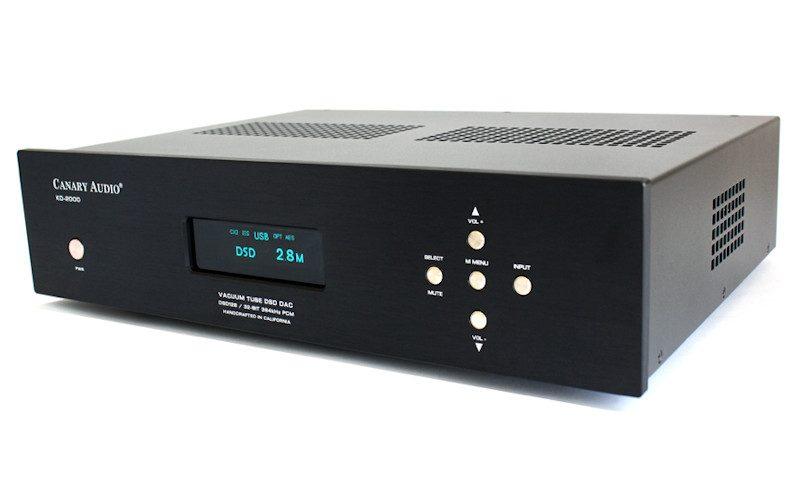 Audio Reviews, Digital to Analog Converter Reviews, Equipment Reviews
Published On: February 11, 2015
We May Earn From Some Purchases Via Affiliate Links

Canary Audio has introduced its first tube-based digital-to-analog converter, the KD-2000. This DAC has a variety of digital inputs and supports high-resolution PCM and DSD. Check out Terry London's review.

For over 15 years, California-based Canary Audio has been designing and building tube-based preamplifiers and amplifiers that have received many positive reviews. I have heard some of Canary Audio's tube amplifiers in different systems and found their build quality, physical appearance, and performance to be quite enjoyable. When I learned that Canary Audio had come out with the reference-level KD-2000 Tube DSD DAC, which retails for $6,495, I was very interested in setting up a review. I contacted Canary Audio's representative, Tony Laurel, who was very excited to make arrangements for his company's first tube-based DSD DAC to be reviewed by HomeTheaterReview.com.

The KD-2000 weighs in at a robust 30 pounds because of a massive transformer and power supply that could easily be found in a power amplifier. A pair of 6922 tubes is located in the analog section. The KD-2000's dimensions are 18.5 inches long by 13.5 inches deep by 4.75 inches high, and its chassis is black, with a thick front plate. The rest of the enclosure is tightly put together to ensure isolation against vibrations that could lead to jitter and distortion. Starting from the left side of the front plate, you'll find: the main power switch; an OLED display that provides information on format (44.1 kHz up to 192 kHz, 16- to 24-bit, DSD64, DSD128), filters (DPLL/IIR/FIR/Phase), left/right channel balance, and output volume; and finally, five buttons for volume, mute, input selection, and menu navigation. Around back are six digital inputs for USB, I2S, Toslink, S/PDIF (2), and AES/EBU, along with XLR and RCA analog outputs. Finally, you find the IEC power input on the far right side of the back plate. The build quality of the KD-2000 is at a high level of craftsmanship, and it has a ruggedly handsome appearance.

In my reference system, any DAC is driven by my MBL 1621 Redbook CD transport through an S/PDIF cable; therefore, to get a take on the KD-2000's sonic abilities with computer-based high-resolution formats (including DSD), I spent many hours listening to it in the reference system of a friend who is totally computer/server-based and has massive amounts of high-resolution material.

The KD-2000 uses the ESS Sabre DAC chipset. Based on my past experience with DACs that use the ESS Sabre chipset, I've found that these DACs offer explosive dynamics and excellent detail and transparency. However, I have found two sonic shortcomings in their performance. First, they lack organic and natural timbres and sound somewhat "washed out" in tonality. Second, the leading edge of different instruments' notes can be razor sharp, which I found to be unpleasant. It causes the overall presentation of the music to be lean and lack body. I was concerned that the KD-2000 might also have these two sonic shortcomings, but it turned out that my concerns were totally unfounded.

The first musical selection I'll discuss is the great Louis Armstrong's Satchmo Serenades (Decca Records). With this album, the KD-2000 created a gorgeous rendering of the unique tone and timbre of Armstrong's voice, along with holographic imaging and individual image palpability. The speed and clarity/transparency that the ESS Sabre chips can deliver were still there, but the tube-based analog section did its job regarding color and imaging.

The next album is In Step by Stevie Ray Vaughn and Double Trouble (Epic). The sting of Vaughn's guitar and the power riffs of his rhythm section were reproduced with great overall dynamics. Additionally, the bass extension and force rocked the room. My hunch is that the massive power supply that drives the KD-2000 allowed it to deliver quick and powerful macro-dynamics, along with "hit you in the gut" bass extension.

My final musical selection is the album Jazz in the key of Blue by the Jimmy Cobb Quartet (Chesky). This CD is one of the most beautiful recordings of acoustic jazz that has been done in the last 20 years. If a DAC (and the rest of the system) is up to it, you get the illusion that the band is playing in your room. My favorite current trumpet player is Roy Hargrove, and his playing on this album is truly breathtaking in its lyrical phrasing and the pristine, warm, brassy tone he creates with his instrument. The KD-2000 nailed Hargrove's tone and the color of his trumpet, placing him slightly left of center (where he was located in the studio) and creating a three-dimensional image that floated into the listening room.

By the time I got to that last album, I had taken out the 6922 stock tubes and had rolled in a pair of NOS 1957 Mullard tubes. Even before the tube swap, the KD-2000 performed at a very high level. However, the tube swap took this DAC to an even more superlative place in regards to high-end extension, airiness, purity of color, and tones of different instruments.

High Points
• The KD-2000 can play any format that is currently available with beautiful timbres/tonality, punch, and power, and it creates a large, three-dimensional soundstage.
• The KD-2000 has excellent build quality and a very attractive look. The internal craftsmanship regarding its parts selection and power supply is superlative, as well.
• The KD-2000 allows you to tailor the sound to your personal taste by rolling the 6922 tubes in its analog section. The 6922 tube, either NOS or current production, is plentiful and not very expensive.
• The KD-2000 has its own volume control that allows you to directly drive your amplifier without the expense of a preamplifier.

Low Points
• Because the KD-2000 has a massive power supply and also is tube-based, it can't be put into a closed cabinet, or it will overheat.
• Like all tube-based gear, the KD-2000 will have to have its 6922 tubes replaced at some point in the future. However, because of how the KD-2000 runs these tubes and the longevity of 6922 tubes, it could be years before a new pair is needed.

Comparison and Competition
Two DACS that would be competitors to the KD-2000 based on price are the MSB Analog DAC, which retails for $6,995, and the EAR-Yoshino 192 DACute DAC, which retails for $5,895. The MSB Analog DAC comes close to matching the dynamics and speed of the KD-2000, but it falls behind in the areas of tonality/color and image palpability. The Ear-Yoshino 192 DACute DAC, which is also 6922 tube based, gets the timbres/tonality right like the KD-2000, but it lacks the overall macro-dynamics, lower frequency extension, and punch of the KD-2000.

Conclusion
Canary Audio's first attempt at an all-format tube-based DAC has turned out to be a great success. It offers great build quality, a robust power supply, and a tube-based analog conversion section that gets you the speed/transparency/details of digital sound while blending in the tonality/colors/image palpability of what tubes and analog have to offer. As far as I can tell, the KD-2000 does equal justice to Redbook CDs and high-resolution/DSD material, so it can play any music you have in your collection. The Canary Audio KD-2000 Tube DSD DAC is the second best DAC I have ever had in my big system. My reference Concert Fidelity BD-040 DAC, which only does Redbook and costs $5,500 more, does everything slightly better than the KD-2000, but it does not play high-resolution formats in their native bit rates or support DSD at all. It's crazy to call a $6,495 DAC a bargain, but the Canary Audio KD-2000 Tube DSD DAC offers a superlative level of performance and competes with DACs that are a lot more expensive. I purchased the KD-2000 for my second, smaller system because of its wonderful musical abilities and because it will allow me to get into DSD and high-resolution computer-based formats.

You'll automatically be entered in the HTR Sweepstakes, and get the hottest audio deals directly in your inbox.
Subscribe
Connect withD
Login
Connect withD
4 Comments
Oldest
Newest Most Voted
Inline Feedbacks
View all comments
HomeTheaterReview Rating
Value:
Performance:
Overall Rating:
This is the static ad content. This is just a placeholder for now to get things styled.
Visit Website