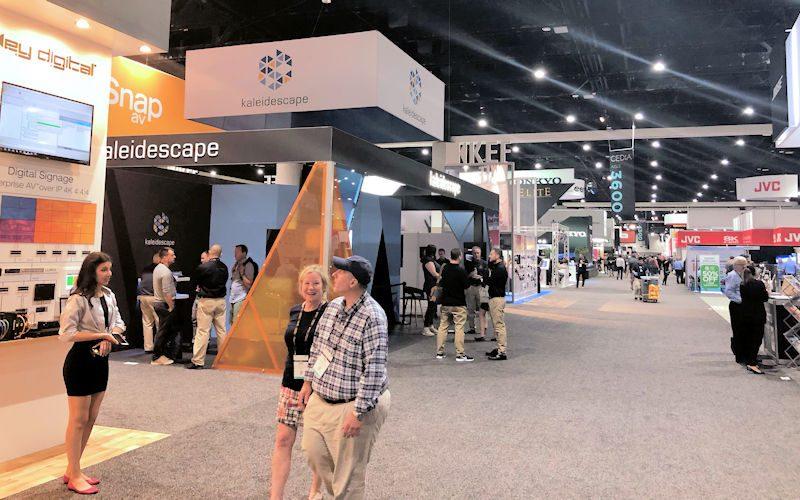 Dennis Burger says you were the star of CEDIA Expo 2018, even if you weren't there.

Here's the thing about trade shows like CEDIA Expo, the most recent gathering of which took place from September 6-8 in San Diego. On the surface, each one can seem like a chaotic meeting of diverse manufacturers and retailers and journalists, all showing off and ogling the latest and greatest AV, automation, and networking gear. Keep your ear to the ground, though, and a unifying story starts to emerge from such gatherings. It's not plastered on banners or shouted by barkers at the entrance to the show floor. There aren't posters promoting a show's theme. And nonetheless, amongst all of the various unrelated product releases, a central theme arises as an emergent property of all the chaos. 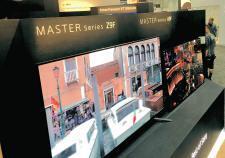 We've been covering a lot of those product releases on the right side of the main page, and we'll continue to spotlight interesting specific products we saw at the show this year. But in breaking with tradition here at Home Theater Review, this big overview of the show isn't going to dabble in big product releases. At least not much. Instead, I want to talk more about the central themes I mentioned above. Because this year's story was different from any other I've heard coming out of CEDIA Expo. This year, the star of the show was you. No, seriously, I actually mean you.

Welcome to the Spotlight
What do I mean by that? Well, it will come as no great shock to anyone that many previous CEDIA Expos (CEDIA stands for Custom Electronics Design and Installation Association, in case you've forgotten) have focused heavily on products that deliver better profit margins for dealers, that offer exclusivity and artificial walls between the consumer and the full features of their gear, especially when it comes to control systems and such. In other words, custom integrators have always been the star of the show here.

As we walked the show floor this year, though, it was hard to deny that the prevailing winds were blowing hard in the direction of consumer choice and consumer empowerment. In previous years, we've seen CEDIA as a whole try to get ahead of voice controlled digital assistants like Alexa and Google Home, embracing them in an effort not to get left behind. This year, we saw the industry instead asking the question, "Okay, but how can we actually make the experience of these ubiquitous mass-market products better and more personalized? MSE had one answer with its OS-440 smart outdoor amplifier, which extends the Amazon Alexa or Google Home experience outdoors in a completely untethered way. 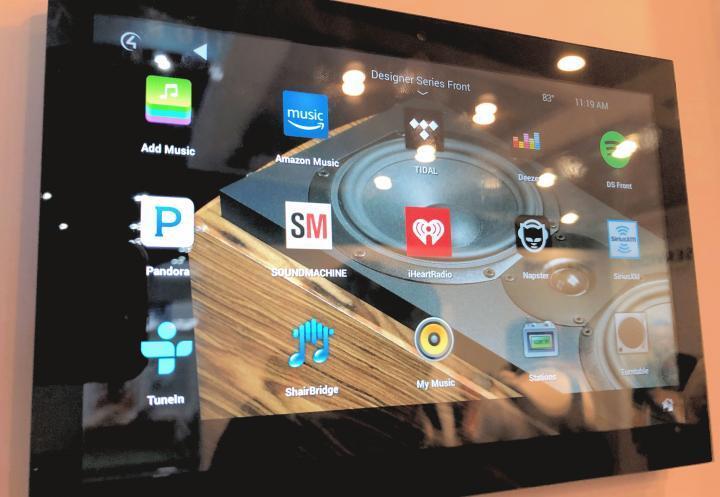 Control4, meanwhile, has expanded the capabilities of its When >> Then featuring, allowing homeowners more power than ever before in terms of doing their own customization and programming to the custom-installed automation system. You can now, for example, create and edit your own voice scenes for Amazon Alexa, a feature previously locked behind the dealer wall. You can also now add music services--like the newly added Amazon Music and Deezer Hi-Fi--to your Control4 system entertainment and automation system without calling your installer.

Perhaps the most significant way in which this new embracing of consumer choice reared its head was in the startling selection of speaker finishes on display. Within its sound room, Paradigm was obviously proud of its 7.2.4-channel Atmos audio system comprised entirely of in-wall and in-ceiling speakers. But the real star of that booth, in my opinion, was the rainbow collection of Persona speakers out near the aisle. 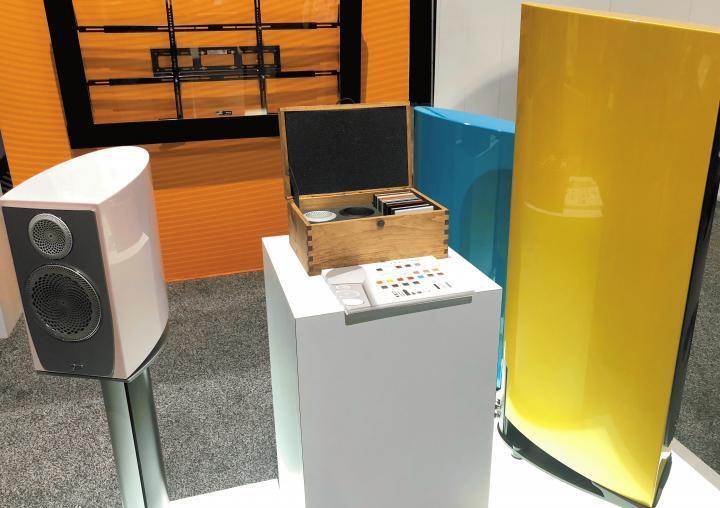 Not to be outdone, Focal's new lineup of Kanta speakers looked like the counter at a Baskin-Robbins. Want speakers that blend in with your décor? You could find them. Want your speakers that pop like bubble-gum? They were on display, too. For years now, this is something we've been begging our friends in the speaker industry to do more of, and it's heartening to see manufacturers increasingly embracing this idea, which--true--does mean they have to keep more inventory and up their factory orders significantly. But it also means that you have more speakers to choose from than the tired old black and wood-veneered boxes that have dominated our industry for far too long. 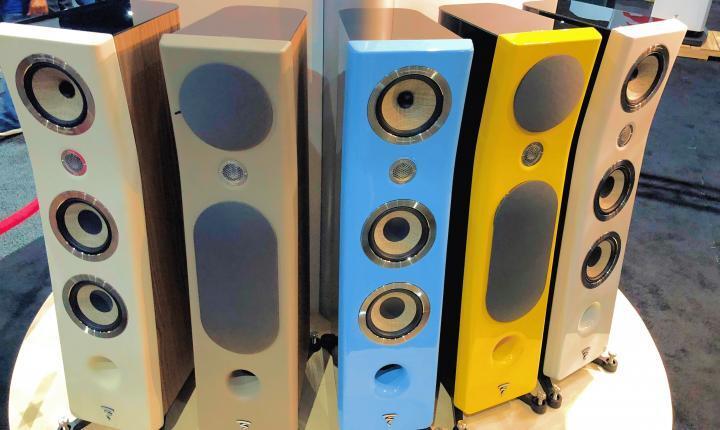 We even saw that sort of personalization in products you might not expect, like Paul Hales' new Theory Audio Design speakers and soundbars. Theory's products are, in a way, a sort of distillation and simplification of everything Hales has done with Pro Audio Technology over the years, and the intent is to bring that same level of audio performance--once the domain of uber-custom systems--into a smaller, more manageable, more affordable system that includes passive soundbars and standalone speakers alike. What's neat is that the end-caps of these speakers can all be purchased in a wide range of finishes, from black to white to gunmetal gray and carbon fiber, with your choice of gloss or matte finishes for pretty much all of them. Granted, most such systems will probably be installed behind projection screens or fabrics, but given that prices for a complete system start at $7,900 (the decked out Atmos system we saw at the show was a little closer to $10,500 with its nine-channel Loudspeaker Controller), it's reasonable to expect that we'll start to see Hales' systems in much more diverse listening rooms in the near future.

The Future is Coming 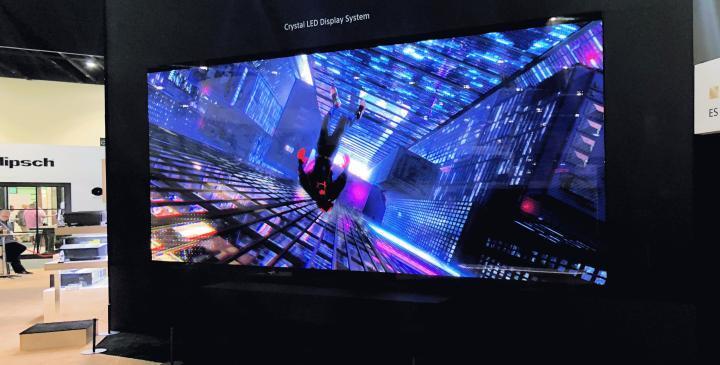 Unsurprisingly, CEDIA Expo 2018 also gave us a glimpse at the future of home entertainment. And if I had to sum up the future of video in one word, that word would be "large." That's no real shock if you've followed the development of MicroLED over the past few years, but what struck me as I wandered the show is just how close we are to MicroLED being a ubiquitous reality. Samsung yet again showed off "The Wall," and Sony had its ginormous Crystal LED display at the center of its booth (whereas the drop-dang-dead gorgeous Master Series OLED and LED TVs flanked the edges), but MicroLED made big appearances by way of a number of other manufacturers, as well, in a way that really showed off its scale, modularity, and expandability. Whether or not all (or even most) of these displays end up being real products anytime soon remains to be seen, but there's no doubt that the underlying technology itself is going to be filling walls before you know it. 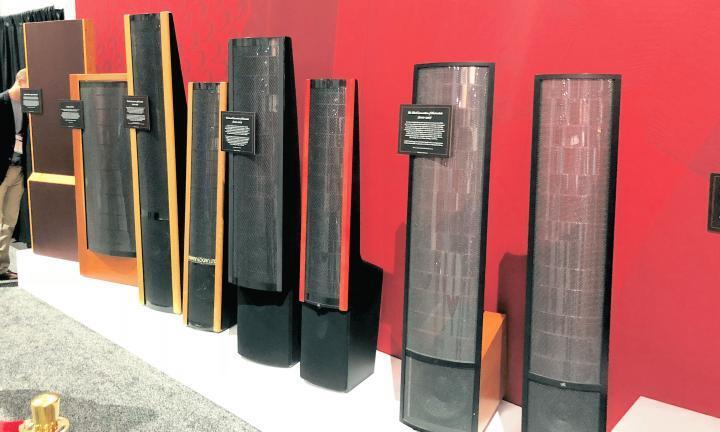 Speaking of "real products," one of the most compelling demos at the show was one that's also the most difficult to talk about in any depth. MartinLogan's booth--while lined with representatives of its entire history on the outside--featured nary a visible speaker on the inside. And yet it was one of the most dynamic, immersive, and impactful audio demos we heard during the week. Was it a new in-wall speaker? A new gigantic electrostat? A tiny little spit of a thing using new technology? Something altogether different? Your guess is as good as mine. The company wouldn't even give us hints, except to say that we'll find out eventually. On the one hand, you could argue that it's kinda silly to demo a product at a show dedicated to products and not reveal a thing about it. But on the other hand, MartinLogan reminded us that, in the end, this hobby of ours isn't about model numbers and specs; it's about pure enjoyment. The experience of sight and sound. And I guarantee you everyone who passed through that booth will be first in line for next year's show to find out exactly what it was we heard there. 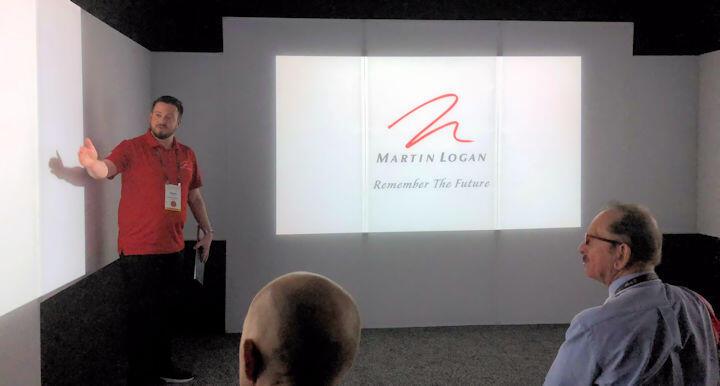 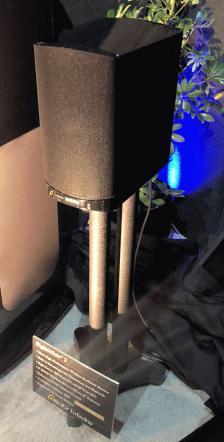 A few doors down, we got to see another product that points to the future of a favorite audiophile brand, although in this case we actually got eyes on it. And a model number! GoldenEar Technology was showing off its fully active, wireless DigitalAktive 3, which relies primarily on Bluetooth and Chromecast connectivity, although of course there are line-level analog inputs around back. As you might expect, the sound was jaw-droppingly good. What wasn't expected, though, is just how much bass this little puppy cranks out. Jerry and I honestly thought it was mated at a sub at first. True story. That should be available sometime next summer for $999 apiece.

Another mysterious new... something... we experienced at the show was IMAX Enhanced, a partnership between IMAX and DTS. In short, IMAX Enhanced could best be described as a certification instead of a new technology, but it will have a new hardware component. New receivers from Sound United were on display that have DTS Enhanced sound processing capabilities built in. The sound format part of the equation mostly differs from the existing DTS:X standard thanks to the addition of a front-center height speaker, but details were vague aside from that. It's also unclear if you'll need a new UHD Blu-ray player to play the discs featuring the format, although we confirmed that the two demos available at the show wouldn't play on the OPPO UHD Blu-ray players most exhibitors were using. And Sony announced that its new Master Series displays and existing A1E, A8F, and X900F TVs would be earning IMAX Enhanced logos, although it wasn't entirely clear what would happen if you tried to view an IMAX Enhanced disc on a TV that didn't carry said logo.

Still, the demos we saw were compelling, and it appears that any movies released in the IMAX Enhanced format will go through the same IMAX DMR that its theatrical releases go through. Keep your eyes on the News section of Home Theater Review for more deets on that once we get them and/or understand them. 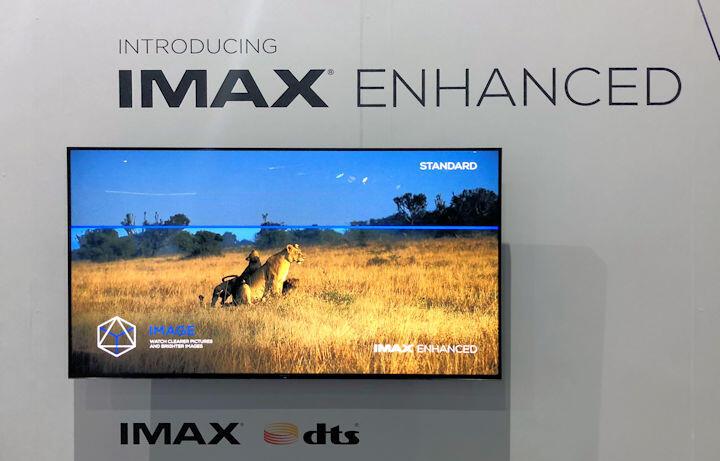 There's a Light...
More than anything else, what struck me about this year's CEDIA Expo was the pervasive optimism, which is kind of rare these days. Yes, there were plenty of new speakers and sound sources that challenge our beloved paradigm and point to a more connected, more wireless, less finicky future for audio. But despite the increasing irrelevance of high-performance audio at CES, I came out of CEDIA Expo pretty secure in the notion that hi-fi ain't going anywhere anytime soon. Like most things, yes, it's evolving. It's getting slicker and prettier and more convenient. But for the first time in a long time, I left a trade show not feeling like a horse-and-buggy enthusiast in 1910.

You'll automatically be entered in the HTR Sweepstakes, and get the hottest audio deals directly in your inbox.
0 0 votes
Article Rating
Subscribe
Connect withD
Login
Connect withD
0 Comments
Inline Feedbacks
View all comments
Author
Dennis Burger
When you buy through links on our site, we may earn an affiliate commission. Your support is greatly appreciated!
This is the static ad content. This is just a placeholder for now to get things styled.
Visit Website