Our reviewer found the Chord One CD player's physical design "a hoot!" but when it came time to listen the Chord wiped that smile right off his face and replaced it with awe for this seriously good CD player that can also be used as a first-class transport 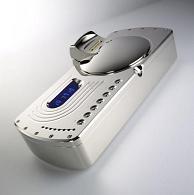 Let's talk about 'cool'. Normally, this is something that eludes the pages of hi-fi magazines because audiophiles are nearly unique* among enthusiasts and anoraks in our resolute joylessness. Even Roy Cropper on

Well, frankly, I'm sick of this crap. It's about time you lot remembered that audio is about music and music is about - bottom line - pleasure. Or have you forgotten what it's like to buy a piece of gear simply because you like it? Have you been hounded so viciously by the audio equivalent of the politically correct that you can't bear just to switch on a system for fear of not allowing it to warm up sufficiently? If you simply cannot rid yourself of this angst, then you will hate the Chord ONE CD player, which is, undeniably, an absolute hoot. Straight out of the box. Why? Because it's cool. As in genuine Ray-Bans, a piano player in a New York bar, Dino's cuff links, a wet shave at Trumper's. Seriously cool.

Chord's Choral range is one of very few hi-fi stables able to combine audiophile performance with 'lifestyle' presence. The ONE CD player is a natural addition. The stuff doesn't take over your life. It doesn't require you to be of a specific persuasion. You don't have to consult runes, nor Glasgow, nor gurus to use Choral. You don't even have to beg your wife for the space in which to house it. In a nutshell, Choral is to high-end audio what a Porsche Boxster is to exotic and temperamental automobiles: 99 percent of the fun and

With the ONE, Chord has come a stage closer to a true 'entry level' Choral system because - let's face it - £4750 for the least expensive pre-/power amplification combo ain't cheap. When Chord fits an integrated amp into the now-familiar Choral chassis, for, say, £2495, they will have - with said integrated and the ONE - the niftiest small-footprint system since the 'chocolate bar' Meridians of a million years ago.

Before you rub your hands with glee, the ONE is

Let's look at what you do get. The ONE employs the exact same professional die-cast Philips CD-Pro2M CD mechanism and isolated top-loading arrangement as the Blu CD transport. Inside is the latest AKM 4384 24-bit 192kHz 2-channel device to provide the digital-analogue conversion. A fully-buffered, true balanced analogue output stage ensures the best possible musical performance, accessible via proper XLR balanced analogue outputs; you will find, if you have a pre-amp with balanced inputs, that this mode offers superior sound, especially for its sense of 'air' and seemingly tighter bass. The ONE also provides RCA phono outputs for systems lacking balanced operation, plus a BNC socket for SPDIF coaxial digital output.

Here's where you see Chord sticking to its guns, despite the demands of the market. It lacks both TOSlink optical and RCA phono coaxial digital output, simply because Chord's engineers are adamant that BNC is the best means of ingress and egress for digital signals. Obviously, the ONE can also be upgraded by adding the DAC64. Chord makes it clear that, although the ONE shares a lot with the Blu transport, it has little in common with the zero-compromise DAC64, so here's where the cost difference is realized. The ONE dispenses with all of the frills, and a bit of the performance. But using it feels just like you're playing with a Blu.

See what I mean about the Porsche Boxster analogy? Yes, a 911 will blow your socks off. But a Boxster will at least lower them to your ankles. Ditto the ONE versus its two-part sibling. What they share most obviously in common is that huge, hinged lid - a rare occasion when I don't puke at the thought of a top-loader. The only thing that would make this aspect of the ONE even cooler is motorizing its operation. Chord says they're studying this, but it will add to the price.

A lot less cluttered than the Blu, the ONE places its minor controls and keypad on a substantial, all-metal remote control. And as it costs a lot less, many of you who covet a Blu might opt for the ONE instead just as to use a transport. Chord left the top plate clean save for the minimum number of buttons to control all transport functions, seven in a row and therefore prettier than a Blu. Above them is the blue-lit display, to the right the aforementioned lid. Damn, I love that lid, straight out of Jules Verne. You expect to hear the hiss of a vacuum lock when you close it. It makes you feel like you should be wearing a Panerai or Rolex Submariner wristwatch in order to be allowed to use it.

Not everything about the ONE is cool. Chord has yielded to public
demand in a move that proves the customer is not always right. In
addition to the original, gorgeous satin silver finish, and the sexy,
sinister satin black, Chord now offers the Choral components in
'Brilliant', a name clearly not referring to the intellect of those who
would pay the extra 450 for it. It's like bits of carrot somehow always
appearing in vomit even if you didn't have carrots that week: get near
this thing, and it will show fingerprints - even if you wear gloves or
operate the buttons with telekinesis.

Fed into a number of systems, both balanced and singled ended, and
involving the Arcam Solo CD Receiver, the PrimaLuna Prologue Two
integrated amp, the McIntosh C220/MC2102 pre/power combination, and
speakers including Wilson WATT Puppy System 7, Sonus Faber Guarneri,
Rogers LS3/5A and PMC DB1+, the ONE took mere seconds to insinuate its
way onto my post-lottery win Wants List. Somehow, Chord has dialed in a
sound as satin-y as the finish. From my recollection of the DAC64, it is
neither as finely-etched in the middle nor as commanding in the lowest
octave. I suspect that the voicing very carefully, very tentatively errs
on the side of euphony.

In this respect, it's almost out of character with what I consider to
be the Chord norm. Chord has always eschewed musicality for accuracy,
and every system of theirs I've used or auditioned has, for the most
part, placed utter transparency and speed over warmth or 'roundness'. As
a rule, Chord gear engenders respect rather than lust. Let's put it
another way: even with a belly full of tequila, there ain't no way you'd
mistake typical Chord gear for valve-bearing hardware. In this respect,
Chord is wise to crank up pleasure over, say, authority, because the
target Choral client is probably not the sort who would place 'ultimate
extraction of low level detail' above the ability to listen to music for
hours without fatigue.

Intriguingly, the sound quality placed the ONE smack in-between my
budget reference players - the Musical Fidelity X-RAY v3 and the Quad
99CDP - and the take-no-prisoners Marantz CD12/DA12. I doubt that
Chord's golden ears sat there with a representative selection of rival
players at assorted price increments, but there's no doubting that the
ONE sounds like a 3k machine. It's rich and involving, especially
because of its ability to create a vast soundstage with an enveloping
character. Whatever I may have intimated about Chord tilting the balance
away from the clinical toward the cuddly, it does still produce copious
amounts of detail, and it really does provide you with the opportunity
to lose yourself in a truly realistic recreation of a musical event.

In particular, the ONE demonstrates genuine panache when it comes to
the portrayal of voices, the Blind Boys of Alabama benefiting from its
ability to retain textural differences from singer to singer. At the
other extreme, near-castrato harmonies remained sweet and
sibilance-free, from Poco's to the recent Bee Gees' ,
the latter not a group that ever seemed to exhibit any particular
interest in recording quality. But the litmus test, if this CD player is
to become the choice of the lounge lizard, has to be easy listening.
With 1950s Capitol recordings, the sound is downright salacious.

Here's the best way I can put it: if Bobby Darin were reincarnated as
a CD player. he'd be the ONE. Smooth, suave, able to carry off with
ease a song allegedly owned by Frank or Dino or Nat. Everything else is,
well, just so much Jamie Cullum.

Forget the chrome finish. That's strictly for very sad, Bauhaus-driven, -reading,
wannabe-German masochists. Trust me: after playing one CD, you'll be
fed up with wiping off fingerprints and staring art your own mug in the
reflection. Chrome sucks on anything beyond a Harley-Davidson's
tailpipes. Instead, buy a satin black ONE if you listen to a lot of
hip-hop or heavy metal, or you're a Goth, or you actually own black
equipment. Opt for the satin silver if you just want something that will
never, ever date. If you buy either, what you will own - proudly - is
the CD player for people who aren't afraid to play air guitar
(or, for that matter, air cello), in the privacy of their own homes.
That ain't cool: that's joy.

*I said 'nearly unique' because photography and computer magazines are just as miserable.