Google's Chromecast technology has pretty much become ubiquitous since we reviewed the original media bridge back in 2013. Chromecast built-in is now a common inclusion in many smart TVs, soundbars, media players, and AV receivers. This begs the question, is... 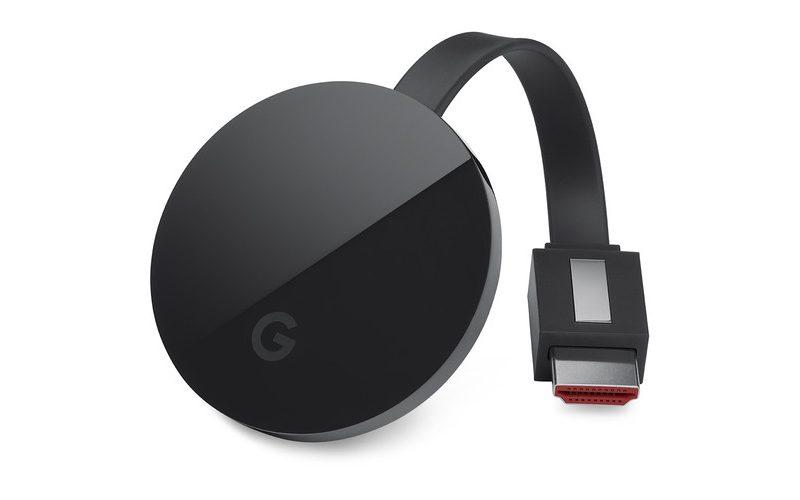 Google's Chromecast technology has pretty much become ubiquitous since we reviewed the original media bridge back in 2013. Chromecast built-in is now a common inclusion in many smart TVs, soundbars, media players, and AV receivers. This begs the question, is there still a reason to buy a standalone Chromecast media bridge?

The Chromecast Ultra ($69) is Google's UHD-friendly media bridge. Like its predecessors, the Ultra is not a media player in and of itself. It's a bridge, allowing you to stream content from phones, tablets, and computers to your display or AV processor. The Ultra allows for the streaming of UHD/HDR content from supported services like Netflix, YouTube, and VUDU. It supports both HDR10 and Dolby Vision HDR, which is a nice perk, and it also allows for playback of multichannel soundtracks (up to Dolby Digital Plus) when connected to your AV processor. The Ultra is compatible with Android 4.1 and higher, iOS 8.0 and higher, Mac OS X 10.9 and higher, and Windows 7 and higher.

The Ultra is a little black puck measuring 2.25 inches in diameter and about a half-inch high. Sticking out of one end is a flat, black, three-inch-long HDMI cable that supports HDMI 2.0a with HDCP 2.2 for connection to a display or AV processor. On the opposite end is a USB port to connect the supplied power adapter. Unlike previous models that could be powered off your TV's USB port, the Ultra's increased processing prowess demands the use of the power adapter.

Another spec that's new for the Ultra is the inclusion of an Ethernet port, which is actually located on the power adapter--so I didn't even see it at first. This is a valuable addition, as UHD and HDR streaming can really benefit from the stability of a wired connection. 802.11ac Wi-Fi is also onboard. I began by connecting the Ultra to my 2015 LG 65EF9600 UHD TV, which supports HDR10 but not Dolby Vision. I powered up the Ultra and used the Google Home app on my iPhone 6 to walk through the setup process. (You can also set up the Chromecast using a computer by going to chromecast.com/setup.) When I launched the Google Home app, a pop-up window immediately notified me that a new device was found and asked me if I wanted to set it up. I hit Setup and followed the app instructions, which really just involved naming the device and adding it to my Wi-Fi network (if you go the wired route, you don't even have to do this). During the course of my evaluation, I actually moved the Chromecast Ultra three times, to multiple Wi-Fi networks, and had no trouble getting connected each time.

That's it for setup. Next it's all about casting content from compatible services on your mobile devices. The list of compatible services is long (see it here) and includes Netflix, YouTube, Hulu, Google Play, Sling, PlayStation Vue, HBO Now, Showtime Anytime, CBS, ABC, Watch ESPN, Fox Sports Go, Spotify, Pandora, and iHeartRadio. There's no support for the Amazon Video app, though, which eliminates one source of HDR content. You can cast directly from any compatible app on your mobile device, or you can stay in Google Home and use it as a central interface. I remember that my main gripe (and it was a minor one) with the original Chromecast was that it lacked the cohesion of a dedicated media streamer because there wasn't a unified interface. You had to jump from app to app to launch content. The Google Home app now provides that cohesion. The home page has three options along the top: Watch, Listen, and Discover. Within each sub-menu, Google Home shows you exactly which apps on your device are cast-compatible. For instance, under Watch, Google Home showed me content recommendations from YouTube, Netflix, and ABC, with the ability to launch each app directly from there. It also gave me a list of other compatible apps. Under Listen, I got recommendations from Spotify, Pandora, Google Play Music, and iHeartRadio.

If you launch an app from within Google Home, there's a little icon at the top left (at least that's where it is in iOS) to return to Google Home at any time. It's a seamless experience.

Now let's talk performance. In terms of general use, I really didn't have any issues with the Chromecast Ultra. With every service I tried--including Netflix, YouTube, VUDU, Google Play Movies & TV, Pandora, and iHeartRadio--I experienced no connection issues, and playback was consistently smooth and stutter-free, even over Wi-Fi. There was a very short lag between the time I hit the Cast icon and when the content began playback on my TV, but the process is faster than it used to be. Netflix was probably the slowest to load content on the TV screen (a little slower than using a dedicated box like the Amazon Fire TV), but it was still just a matter of seconds. Since UHD and HDR playback are the main selling points of this particular Chromecast device, this was the main focus of my testing. The Ultra sent a 4K/60p signal to the compatible UHD TVs with which I mated it, including the aforementioned LG 65EF9500 and Samsung's older UN65HU8550. Only the LG is HDR-capable, though. I began with YouTube, cuing up some UHD and HDR content from Florian Friedrich. His dynamic horizontal multiburst pattern 4K confirmed that I was getting the full UHD resolution via YouTube streaming, and all of the HDR clips I chose successfully initiated the HDR mode on the LG TV. Many of these clips are gorgeous, and they looked great through the Ultra.

Next, I moved to Netflix and did not have the same success, at least at first. When I tried to stream Netflix's HDR content like War Machine, Marco Polo, and Daredevil via a Wi-Fi connection, it would not kick the LG TV into HDR mode. I tried simply switching to a wired Ethernet port, but that didn't seem to help. So, I reset the Ultra and began with a wired connection, and that did the trick. From that point on, I had no issues streaming Netflix's HDR content, although the content was a bit slow to ramp up to full resolution and nowhere on the screen would it give me any confirmation of said resolution.

On to VUDU ... I had no trouble streaming the UHD version of Jason Bourne from the VUDU app, but something else happened that I was not expecting. My LG TV kicked into HDR mode. Why wasn't I expecting this? Because VUDU only supports Dolby Vision at this point, and my LG TV only supports HDR10. The HDR content didn't look right, though. It was dark and over-exposed. A VUDU rep recently told Forbes' John Archer that they intend to add HDR10 support, but nothing has been officially announced. Either my system was trying to handle the Dolby Vision signal and doing so poorly, or I was seeing some type of beta version of HDR10 that isn't quite right yet.

Finally, I connected the Chromecast Ultra to my Onkyo TX-RZ900 AV receiver to make sure I could pass through UHD/HDR content and get a multichannel audio signal. And I could. UHD video passed through just fine, and I got Dolby Digital Plus soundtracks from Google Play, Netflix, and VUDU.

High Points
• The Chromecast Ultra offers 4K and HDR streaming for only $69. Plus the Ultra supports both HDR10 and Dolby Vision.
• The Google Home app provides an integrated interface for more intuitive navigation--and it allows for voice control, if you own a Google Assistant.
• The new model is faster to launch playback, and I had no issues with skipping or freezing.
• Ethernet has been added.
• The Ultra's tiny form factor allows it to hide discreetly behind your TV or AV processor.
• Guest Mode makes it easy for others to stream content without having to join your private Wi-Fi network.

Low Points
• The Amazon Video app is not Chromecast-compatible.
• You can't power the Ultra through your TV's USB port, as you could with older models.
• UHD/HDR compatibility varies depending on which source devices you use.

Comparison & Competition
The Chromecast Ultra doesn't really have a direct competitor in the media bridge department; however, there are some dedicated 4K media players out there in the same price range. I recently reviewed the Xiaomi Mi Box Android TV player that also sells for $69 and supposedly supports HDR playback. As you can read in my review, though, I could not get the box to output HDR at all.

Roku's $69 Premiere box supports 4K playback but not HDR. To get HDR, you must move up to the $99 Premiere+, which includes a remote with a headphone output for private listening, an Ethernet port, and Roku's universal voice search.

The second-gen Amazon Fire TV ($89) does not support HDR playback but is a 4K box. You can read my full review here.

Conclusion
The Chromecast Ultra 4K media bridge does what it's supposed to do, and it's easier to set up and has a more cohesive user experience than earlier generation Chromecast devices. The ability to add voice control via Google Home is a nice, new perk, as well. But I return to my original question: Given how many devices now feature Chromecast built-in, is there a reason to buy a standalone Chromecast media bridge? I definitely see the value of owning a Chromecast device in general, due mainly to its portability. It makes a great travel companion on work trips and vacations, allowing you to enjoy your streaming services on any video device with an HDMI input. If you've never purchased a Chromecast device before and you want one, then you might as well invest the $69 for the top-shelf Ultra to get the widest range of functionality and compatibility. But I don't see as much value in upgrading to the Ultra if you already own another Chromecast. Most UHD/HDR-capable TVs are smart TVs with built-in UHD versions of Netflix, YouTube, VUDU, etc.--so you most likely have access to UHD/HDR content already. However, if you absolutely despise your smart TV interface yet don't want to add another set-top box to your gear rack, the Chromecast Ultra is a simple, affordable, flexible solution.