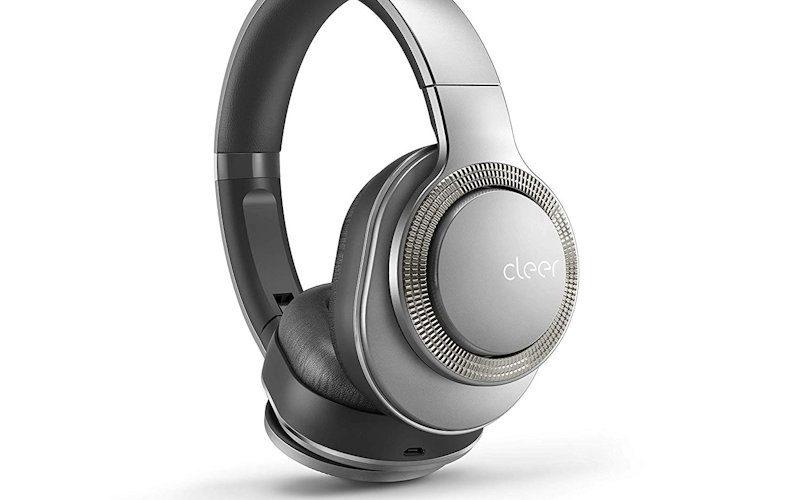 My publisher, Jerry Del Colliano, assures me that wireless noise-cancelling headphones are the future of portable audio. And while the numbers in terms of sales are definitely on his side, I have had doubts about a wireless connection's ability...

($279.99 MSRP) wireless noise-cancelling headphones give me hope that state-of-the-art wireless headphones are within our grasp.

Product Description
The Cleer Flow uses a 40mm diameter dynamic driver that differs from more standard drivers due to Cleer's use of an ironless magnet array. Instead, the Flow has a stacked array or rare earth magnets designed to deliver a more even and symmetrical magnetic flux confinement. According to Cleer, their new design is "...free of the well-known and detrimental hysteresis and eddy currents phenomena causing high order and detrimental distortions."

The Flow utilizes Bluetooth 4.2 with NFC for its wireless codec. It supports not only aptX, but also Sony's LDAC and AAC. Although it does not list aptX HD as one of its codecs, when I connected the Astell & Kern SE100 and paired the Cleer, the SE100 indicated that it was using aptX HD! The Cleer Flow also comes with a 1.2 M cable for those times when the batteries run out. If they run out. The Flow offers about 20 hours of playback time.

Although much of the exterior surface is carbonized plastic, there's enough metal underneath and on accent pieces, such as the interchangeable "style rings," that the overall impression is less of a plastic-fest than the Bose QuietComfort 35 II. At first the whole style ring thing seemed to add little value to the Cleer, but if you put the copper on the right and the silver ring on the left it's easier to tell which is which, which is an ergonomic advantage.

Ergonomic Impressions
The Flow headphones are described as over-ear headphones, but whether they're on-ear, over-ear, or some combination thereof depends on the size of your ears. For me it was that last category--part on and part over. The side pressure for my 7-1/8 sized head was also ideal--no matter how long I stayed in a sideways plank during my workouts, the Cleer never slipped, even when the pads were damp from sweat. The side pressure increases as the headphone band expands, so if you have a larger head the side-pressure will be somewhat greater. 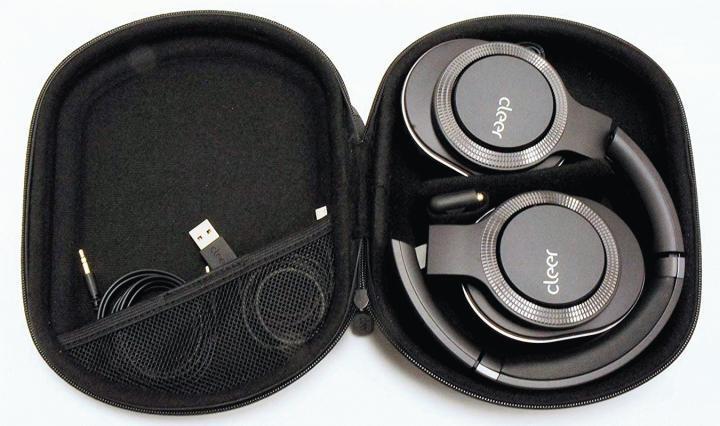 Unlike many headphones, which take up inordinate amounts of room in your satchel, the Flow fold flat and can pivot into the headband, so they are only slightly more than two inches thick when folded up. When placed inside the supplied hard case they take up under three inches of depth. Along with the aforementioned case, the Flow come with a micro USB charging cable, in-flight adapter, a pair of extra "style rings," and a 1.2-meter mini stereo cable.

The Cleer has two sets of control surfaces. The first are along the bottom of the left-hand earphone--there are push-buttons for on/off/pairing, noise cancelling on/off, and noise-cancelling mode selection, which can be either "crowd" or "voice." The 2.25-inch diameter center surface of the left ear is the second control surface. It's a touch sensitive pad that controls volume, pause, jump forward one track, jump back one track, and telephone answering functions. 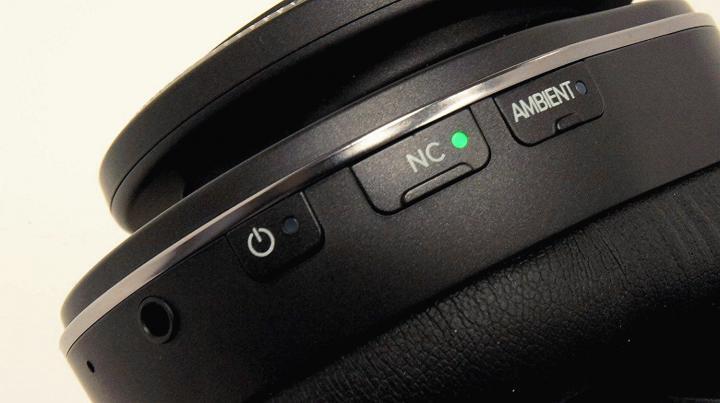 This second control surface is quite sensitive to touch from any human surface, including your upper arms, which was a problem occasionally if I lifted my arms above my head during a workout and touched the side of the headphones. Stuff would happen, such as pause, fast forward, and volume changes. Among its ergonomic niceties, though, the Cleer goes into pause mode automatically when you remove it from your head. Take it off and the music stops, put them on and the music will start again.


For sonic comparisons in a quiet environment (with noise cancelling off), I decided to use the well-known Sennheiser HD-600 wired headphones as my wired standard of comparison. Differences in tonal balance were immediately obvious. The Cleer Flow had more mid-bass and lower midrange output than the HD-600. I would consider these additive colorations. The Sennheiser HD-600 also had greater sense of air and upper frequency extension, even through my 13.5 kHz top-end limited hearing. In a quiet environment I preferred the more neutral and revealing nature of the HD-600's sonic performance.

When I cranked up my TV so that at listening position my SPL meter measured 50 dB average and 65 dB peaks, I could hear nothing in the way of TV sound through the Cleer Flow when the ambient noise cancelling was engaged. Through the HD-600, the outside noise made for a cacophonous listening environment that was certainly a step down in sound quality. In a noisy environment, I definitely preferred the Cleer Flow headphones.

When the Cleer Flow were connected via the wired connection, I noticed a bit more upper frequency air on some classical material, such as my live performance recordings of the Boulder Philharmonic. The differences were subtle, but the wired connection did provide slightly higher fidelity when listening in a quiet environment.


The primary competition for the Cleer Flow is probably the best-selling wireless earphones on the market, the Bose QuietComfort 35 II ($349). The Bose are lighter, due to the large amount of carbonized plastic in their frame. I found the Cleer Flow to be slightly more comfortable despite their added weight. Sonically, the Cleer have far less hiss when in noise cancelling modes, and also had a more dynamic and involving sound during critical listening without noise cancelling activated. Even in noisy environments, I preferred the Flow's noise cancelling to the Bose, where I never could get around the background hiss. The Bose was slightly more tonally balanced overall, but to my ears it was an overly polite sound, while the Flow, with more midbass, had a warmer, but more dynamic sonic character.

Conclusion
I use the phrase "horses for course" a lot when it comes to headphones. Some, like the Sennheiser HD-600, are perfect for quiet environments, but their open design can disappoint in noisier environments. Conversely, the Cleer Flow excels in environments where the HD-600 can't. And while I didn't find the Cleer Flow to be as uncolored as the HD-600, it did deliver a more involving and dynamic sound, with quieter, hiss-free noise cancellation circuits, than the Bose Quiet Comfort 35 II. And while I felt no remorse about returning the Bose review sample, the Cleer Flow has earned its spot as my primary workout headphone. After two months of being sweated on, dropped, and pounded three times a week, they are still looking and sounding mighty fine. If you are looking for a pair of wireless headphones for use "out in the world" and your budget is under $300, you need to check out the Cleer Flow, or its recently announced sequel, the Flow II.

You'll automatically be entered in the HTR Sweepstakes, and get the hottest audio deals directly in your inbox.
Subscribe
Connect withD
Login
Connect withD
0 Comments
Inline Feedbacks
View all comments
Author
Steven Stone
This is the static ad content. This is just a placeholder for now to get things styled.
Visit Website