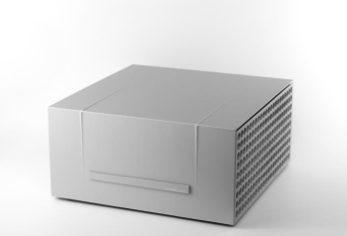 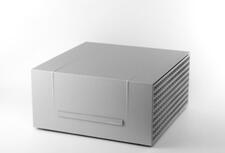 According to Peter Madnick, VP of Engineering for Constellation Audio, the reasons for being able to bring the Inspiration Series of components to market are unique. “Because
we do everything in-house, we are able to utilize many of the same circuit topologies found in our more sophisticated designs. The strong aesthetic family resemblance is achieved through using the same industrial design team (led by Alex Rasmussen of Neal Feay) which created the Reference and Performance Series products.” Inspiration power amplifiers are available in both stereo and monaural configurations and are designated AMP 1.0 and MONO 1.0, while the preamplifier is called PREAMP 1.0.
The heart of the amplifiers’ design is our unique Balanced Bridged circuit topology, which combines multiple single-ended amplifier modules in a fully balanced design – the same design used in our Reference and Performance Series amplifiers. To assure a perfectly balanced signal, the AMP 1.0 and MONO 1.0 also incorporate the servo circuits in our Line Stage Gain Module to make certain that both halves of an incoming signal are perfectly balanced, no matter what the source. With AMP 1.0 delivering a conservatively rated 200 wpc into 8 Ohms (400 wpc into 4 Ohms) and MONO 1.0 delivering twice that (into 8 and 4 Ohm loads respectively) per chassis, it is highly unlikely that anyone will exhaust the dynamic reserves of these powerful amplifiers.
From the Reference Series’ Altair II to the Performance Series’ Virgo II to the new Inspiration Series PREAMP 1.0, the lineage is unmistakable. Technologically, PREAMP 1.0 uses the same Line Stage Gain Module design in a fully balanced configuration as does its more costly siblings. To this, we incorporate such real world features as a home theater bypass, remote turn-on/turn-off capability, and an elegant machined-aluminum remote control. PREAMP 1.0 is equally suited to be the centerpiece of a great music system or as an integral part of a multi-channel home entertainment system. Either way, the user gets the benefits of Constellation Audio performance and design in an affordable package.