HDMI can be a problem factor for any AV component, regardless of price. Crestron offers up the HD-MD8x1 HDMI switcher as a solution to this problem. Jerry Del Colliano examines whether or not it is successful. 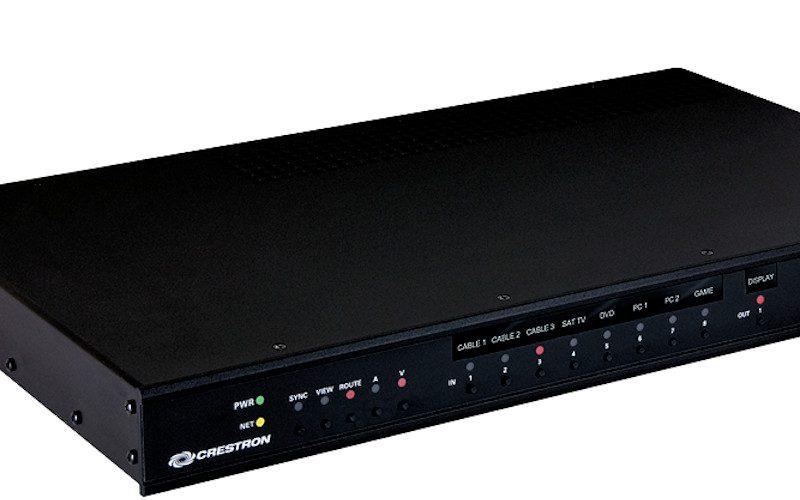 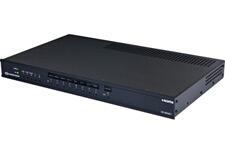 HDMI is a bitch. Even in its 1.4 version, the copy protection can cause perfectly reasonable high end AV components to take upwards of 15 seconds to switch from one input to another. In a world where instant information and gratification are at a premium – making your home theater switch reliably and quickly when connected to HDCP (high bandwidth digital copy protection) sources like Blu-ray, video games and beyond isn’t just a luxury – it’s a necessity.

At $2,400 retail, Crestron’s HD-MD8x1 is more expensive than some modest HDMI 1.4 AV preamps but this powerful, stand-alone solution can rock HDMI switching in ways that other components simply cannot. Crestron’s QuickSwitch HD technology actually manages the “key” needed to switch from one device to another so that your switch times are closer to one second – not 15 seconds. The Crestron HD-MD8x1 also successfully passes all of today’s 7.1 HD audio formats as well as full 1080p video via HDMI so that you don’t lose any cutting-edge performance while trying to get your system to make a proper “HDMI handshake,” as nothing leaves a customer, neighbor, friend of family member less impressed with your home theater than 15 seconds of dead air time waiting to switch from, say, Apple TV to Blu-ray in a darkened room. The Crestron HD removes that worry and brings the rock-solid reliability that you would expect from a top-level automated system to those with full Crestron rigs as well as those just looking for a high end HDMI switching solution.

Performance
My Classé SSP-800 does a pretty good job at switching HDMI and runs well from my Crestron wireless remote control system designed by Simply Home Entertainment. However with a mere four HDMI inputs – my system’s needs simply outgrew the number of HDMI inputs that I have on my Classé. This summer with my rack needing a slight modification, Simply Home Entertainment redid my rack to include modern goodies like a 24x rack mounted switcher and the new Crestron HD-MD8x1 while removing some relic products like a ReQuest music server, an HD DVD player, a D-VHS deck and a component video switcher.

With my system reconfigured, my programmer was able to make most of his magic happen from afar via a fixed IP address which allowed us to update my source pages on my Crestron touchscreen remote, complete with new locations for video switching.

In terms of video, I simply couldn’t see any loss in performance from my direct connection to my Classé SSP-800 AV preamp. Audio-wise on Blu-ray sources, movies beamed in via 7.1 HDMI audio and sounded just as good as before. The opening bank robbery scene of The Dark Knight had the same shimmer when The Joker smashed his stolen school bus into the bank as it did in the past. I simply couldn’t detect a difference in audio or video performance, which is exactly what I want from a device like an HDMI switcher. Its role is to do one thing – reliabily and quickly switch inputs – and the Crestron HD-MD8x1 does just that.

Where the Crestron HD-MD8x1 surpasses all but the insanely expensive professional HDMI switchers is in switching speed. This sucker is fast and it does it right every time. Gone are the long delays. While there is a slight wait between inputs, it’s many times faster than other HDMI sources and switchers that I have used in the past.

Read about the downside of the Crestron HD-MD8x1 HDMI switcher of Page 2.

The Downside
While you can use the Crestron HD-MD8x1 on its own, it’s best with a full Crestron system and many do-it-yourselfer don’t like any product that they can’t, well… do themselves. Respectfully, I have yet to meet the end consumer who has successfully programed his or her own Crestron, although I am sure they are out there, but Crestron is as good as the person programming it. The brand sometimes gets beaten up because poor programmers don’t design the best systems. That’s not fully fair as the hardware is pretty much rock solid but the gear often gets the blame for poor programming.

At $1,800, the look of this component is anything but audio jewelry. For the end user not looking to put the Crestron HD-MD8x1 in an equipment rack, they shouldn’t expect industrial design that looks like a Classé preamp. In fact it looks more like a Carver amp from 1988 than a modern piece of AV equipment. Installed in an equipment rack like my Middle Atlantic AXS rack – the look is no issue. Sitting out next to a Krell, Classé or Mark Levinson AV preamp – this switcher looks pretty pedestrian.

Conclusion
There is no question the Crestron HD-MD8x1 is an expensive HDMI switcher. It’s one of the most expensive that I have found to date; however it performs its simple tasks better than any HDMI switcher I have tested to date and for that it is a pure luxury in my system. Having inputs hop from DirecTV to AppleTV to Blu-ray and back with ease is worth the high asking price. Crestron didn’t make HDMI the pain in the ass that format is. What Crestron did was provide a meaningful solution that anyone can use to get rock-solid HDMI switching in any mid to high-end home theater system.

You'll automatically be entered in the HTR Sweepstakes, and get the hottest audio deals directly in your inbox.
0 0 votes
Article Rating
Subscribe
Connect withD
Login
Connect withD
0 Comments
Inline Feedbacks
View all comments
Author
Jerry Del Colliano
HomeTheaterReview Product Rating
Value:
Performance:
Overall Rating:
When you buy through links on our site, we may earn an affiliate commission. Your support is greatly appreciated!
This is the static ad content. This is just a placeholder for now to get things styled.
Visit Website