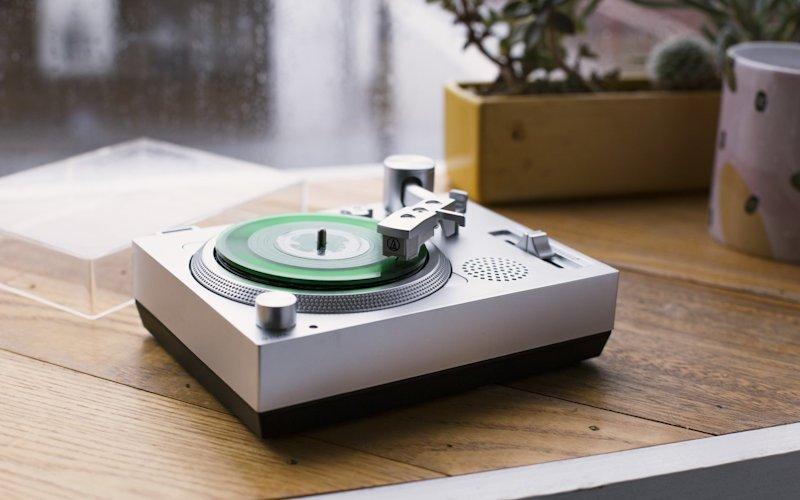 If Jack White has his way, we'll all need something like the Crosley 3-Inch Record Store Day mini turntable to enjoy RSD-exclusive singles. 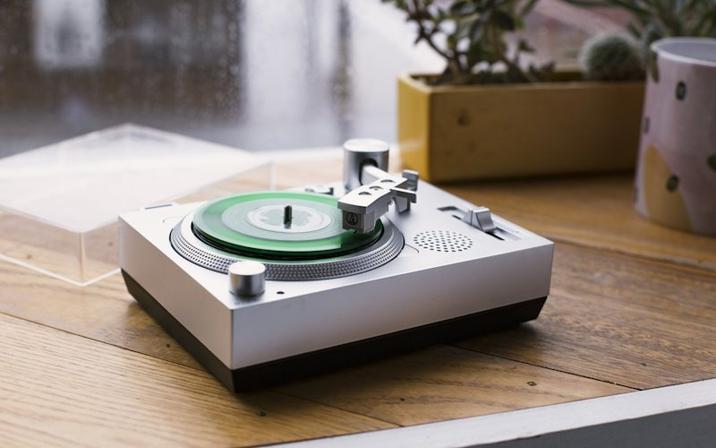 Gregg Ellman is a freelance photographer and syndicated tech columnist/reporter based in the Dallas/Fort Worth area.

In a world where everything seems to be super-sized, it's a little odd (but also a little heartening) to see Crosley go completely in the other direction with a line of mini turntables designed to play only 3-inch records. The Crosley RSD3 turntable measures just 6.16 by 4.50 by 3.25 inches, making it small enough to tuck away in a backpack or cargo-pants pocket. But what it lacks in stature, it more than makes up for with styling and full functionality (assuming, of course, the only function you're interested in is playing 3-inch records). The whole package, with the mini turntable and mini vinyl platters, is eye-catching – some might say cool, others might say cute – but either way, it sports a nice retro look. And it only costs $89.95. With a plastic silver body, the RSD3 mini turntable runs at 33-1/3 rpm speed. But please don't expect to play your thirty-three-and-a-third LPs; they won't work.

So, why 3-inch records? If you're not familiar with the format, these little discs originally appeared in Japan nearly two decades ago and have recently been revived by the organizers of Record Store Day. Crosley introduced the mini turntable as the official turntable for Record Store Day in 2019. During normal times, RSD is an annual day in April, created to celebrate and spread the word about the unique culture surrounding independently owned record stores. In 2020, like everything else, it has to be socially distant, so they spread the single date out to three: August 29, September 26, and, October 24.


New 3-inch records released this year as part of RSD include "Dip" by Culture Abuse; along with "Goodbyes" "Sunflower," "Souvenier De Sant-Trupes," and "Wow." by Post Malone.

Setting up the 14-ounce RSD3 belt-driven mini turntable doesn't take much time at all. In fact, unboxing it will take as much time as the actual setup. Take off the plastic coverings, attach the dust cover, power it up (more on that below), and remove a twist-tie from the tone arm, and you're done. A felt pad covers the platter.

The RSD3 is built with a pre-mounted Audio Technica AT3600 moving-magnet cartridge and stylus, clear dust cover, adjustable pitch control, and a built-in speaker. The speaker won't produce room-filling sound, but there is a 3.5 mm aux out port on the back for connecting headphones or speakers. A Bluetooth transmitter can also be used for connecting portable wireless speakers, which I did try, using the Scosche FlyTunes wireless auto transmitter to send the tunes to my Ultimate Ears HYPERBOOM portable speaker. For power, a micro-USB cable is included, or you can flip over the turntable, pop off the bottom cover, and insert four AA batteries to make it a truly portable turntable. During my testing, I only ran the little turntable on AAs long enough to confirm they'd do the job; I didn't want to add dead batteries to our environmental waste. Instead, I brought a USB powerpack with me when I brought the mini turntable to a few neighborhood driveway gatherings, where it was a huge hit. How huge? Let's just say it was a close second in popularity to the margarita machine.

Granted, you won't find any of these offerings at your local big-box store, but they're pretty readily available at local record stores and online.

A nice accessory for the mini turntable is the stylish Crosley mini record-carrying case ($29.95), which holds up to ten 3-inch records. It's a well-made, vinyl-wrapped case with metal hardware, a carry handle, and rubber feet.

How does the SB46514-F6 compare to the competition? Right now, to be frank, there isn't much competition for the CR6037A-SI, unless you want to shop around on eBay for old Japanese 8ban players. Crosley does make a few other 3-inch players, though, including the CR8050A-WS Mini Cruiser, a suitcase model that looks like the record players found in grammar-school libraries back in the good ol' days, and the Clear Mini Turntable, a RSD 2020 exclusive that comes with two Post Malone singles.

The Crosley RSD3 surprised me. It's a complete package and, for what it is, has everything it needs, except, of course, the AA batteries you'll go through if you want to use this as a self-contained portable machine. If you don't mind carrying one, a USB battery pack is a better alternative anyway, for environmental reasons if nothing else, so I highly recommend choosing that option.

Again, you probably won't wow your audiophile friends with the sound coming out of this little player, but you'll certainly get a lot of questions about what this little contraption is, exactly. Just play it. They'll understand.