The Dan D'Agostino Master Audio Systems Progression Stereo Amplifier ($22,000) is a true powerhouse built on a full-sized chassis measuring 18 inches wide by 20 inches deep and 7.5 inches high, and weighs in at a stout 125 pounds. The... 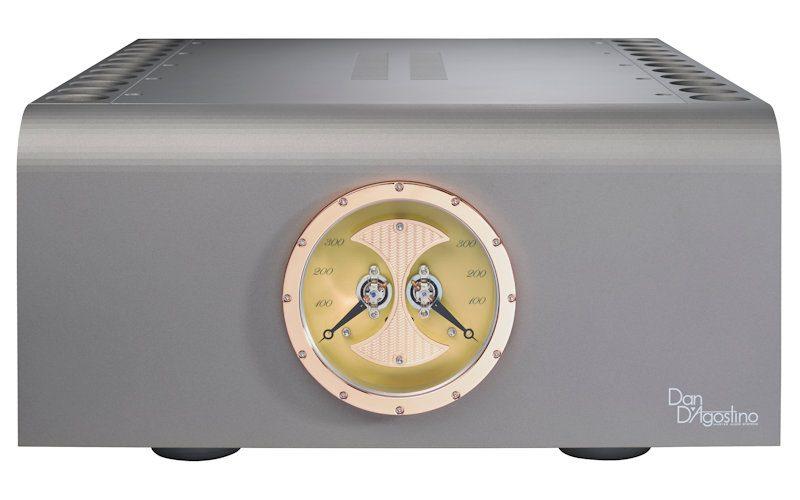 The Dan D’Agostino Master Audio Systems Progression Stereo Amplifier ($22,000) is a true powerhouse built on a full-sized chassis measuring 18 inches wide by 20 inches deep and 7.5 inches high, and weighs in at a stout 125 pounds. The Progression amp’s heritage, both as a D’Agostino piece and the descendent of gear that Mr. D’Agostino designed with Krell, is immediately apparent at first glance. The huge, copper-trimmed power meter front and center on the chassis, and the curved transition between the front and top panels, evokes the look of the recently reviewed Progression preamp without aping it. As I mentioned in that review, Dan D’Agostino says fine Swiss chronographs inspire the copper trimmed power meter. I look at it and see a more steampunk influence, especially when the green backlight is illuminated. Regardless, of the design inspiration, the easy-to-follow needle is driven with a responsive circuit to quickly reflect power output.

Unlike the smaller copper heat sinks on the Momentum amplifier, the Progression amplifier is flanked by two large aluminum heat sinks milled out of hunks of aluminum that weigh about 48.5 pounds apiece. The heat sinks have holes milled through them, top to bottom, which create a venturi like effect to improve cooling. They heat sinks not only look great; they work well. During all of my listening sessions the amplifier never got too hot to touch despite the Progression Stereo Amplifier being capable of putting out 300 watts per channel at 8 Ohms. Given D’Agostino’s design philosophy that an amplifier should have plenty of low impedance drive, the Progression Stereo Amplifier is capable of doubling down all the way to 1,200 watts per channel at 2 Ohms.

It is no surprise that the Progression Stereo Amplifier is a fully discrete, balanced design with a huge power supply. However, there was one unique design element, which is the “Super Rail” circuitry. This circuit is described as being similar to a turbo charger. All amplifiers have some efficiency loss as the signal passes across the voltage rails. The Super Rail design increases the voltage input stage sections, which results in an efficiency loss at the driver stage of only one to two percent, rather than ten to twelve percent.

A couple of larger scale pieces I thought would be could to try with this powerhouse were “Requiem Aeternam” from John Rutter’s album Rutter Requiem (CD, Reference Recordings) and Saint-Saens’ “Symphony No. 3” (FLAC 176/24 from HD Tracks, RCA Living Stereo). Both of these pieces are powerful, dynamic pipe organ pieces, which the Progression handled with ease. The Kaya 90 speakers that I used during the course of this review reproduced a larger, more detailed soundstage than the Martin Logan Summits I also connected from time to time, but the Summit’s larger, powered woofers provided stronger bass. Those main differences out of the way, the Progression Stereo Amplifier was able to reproduce the two pipe organs with impressive impact and detail, two items that do not always coincide. The imaging was precise on the appropriately large soundstage, with the individual voices of the chorus from “Requiem Aertenam” readily discernable and natural sounding.

The more complex staging of the “Symphony No. 3” was precisely set forth, with each section in its proper place. Despite the high level of precision and control, the sound was never harsh or analytical; I found the strings and brass to be reproduced on both speakers with a touch of warmth.

I also auditioned the amp with a plethora of audiophile recordings from the Rebecca Pidgeon, Nils Lofgren standards, and some of the excellent but lesser known recordings from Blue Coast Music. A lot of us have heard these recordings innumerable times at audio shows and are familiar with how they sound on a wide variety of systems. I am happy to say that the Progression was able to scale the size of the respective soundstages of these recordings appropriately. For example, most audiophile female vocalists’ recordings are smaller in scale and would sound out of place if reproduced in a soundstage that sounded like a symphony hall. The Progression Stereo Amplifier had the finesse and detail to scale the soundstage appropriately. Consistent across my listening sessions with the Progression electronics was a listening position that I perceived to be close to the performance, maybe first few couple of rows with smaller scale recordings and first ten to fifteen rows with orchestral sized pieces.

Competition and Comparison
The modern audiophile is blessed to have a lot of excellent amplifier designs to choose from. Two companies that come to mind as making truly excellent amplifiers that can drive difficult loads while exhibiting excellent control are Pass Labs and Boulder Amplifiers. The Pass Labs X350.8 ($14,200) is the largest class A/B stereo amplifier in the Pass Labs lineup, with 350 watts per channel into 8 Ohms and 700 watts into 4 Ohms. It is a touch larger than the Progression amplifier and features a more conservatively styled chassis. The Boulder 1160 ($28,000) has the same power output as the Progression Stereo Amplifier, all the way down to 2 Ohms. The Boulder 1160 also features a very stylish, modern chassis.

Conclusion
The D’Agostino Progression series of electronics are works of art, both sonically and physically. I also spent hours listening to a large selection of current releases, mostly from Tidal, but Roon pulled some out of my collection as well that I would have loved to go into more detail about in a full-length review.

The Progression Stereo Amplifier consistently exercised a great deal of control of the speakers that allowed them to reproduce more of the detail in the signal coming from the preamplifier. Of course, such high levels of detail and control do come at a cost: if your other electronics or source material is subpar, you will definitely hear it. On the other hand, good quality recordings coming into the Progression Stereo Amplifier have the potential to sound amazing in a properly setup system. I found myself engrossed in my listening sessions, with many of them lasting far longer than intended as I became engrossed in the music rather than concentrating on audio nuances.

Reminds me of the FBI!

Meters are mostly entertainment, but they do look nice.

I see the meters going up to about 200 watts….with most speakers…the wattage used will barely move the needles…..

Sorry to rain on the author’s parade, but really, the review sounds like a wine fetishist’s review: “Floral, with just a hint of musk and cinnamon.” Really.

As a practicing EE (BS MIT 77) I am very familiar with amplification distortions. Once you get below a certain level, going lower doesn’t do anything for you. But it can be argued that spending $22K for an amp is not done for the sound, it’s done for the audio wokeness and the interesting cabinetry that such a huge chunk of money can provide. Fine.

0
Reply
Author
Brian Kahn
HomeTheaterReview Product Rating
Value:
Performance:
Overall Rating:
When you buy through links on our site, we may earn an affiliate commission. Your support is greatly appreciated!
This is the static ad content. This is just a placeholder for now to get things styled.
Visit Website