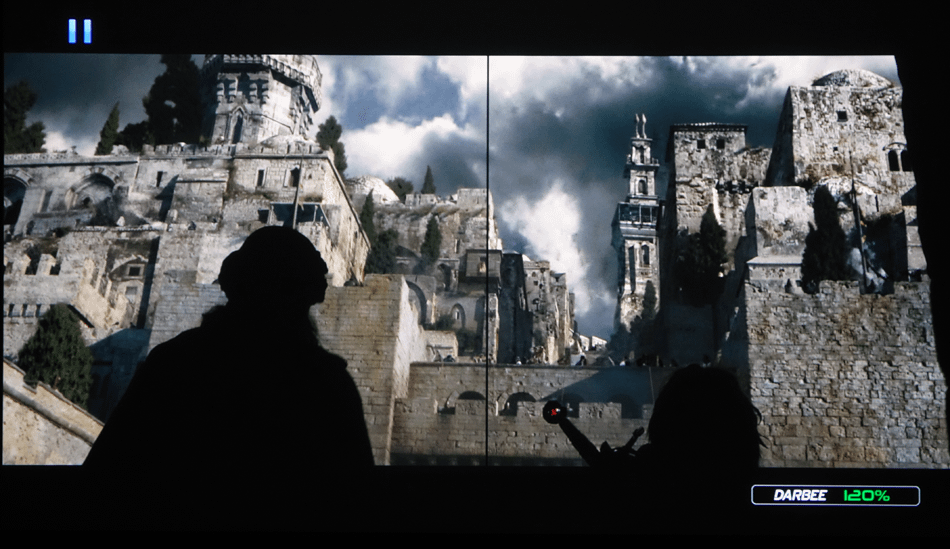 Audio and AV Equipment Reviews, Furniture, Accessories & Other Reviews
Published On: June 22, 2016
We May Earn From Purchases Via Links

Adrienne Maxwell reviews the DVP-5000S from DarbeeVision. This petite box allows you to add DARBEE Visual Presence video enhancement, designed to improve image clarity and depth, to your HDMI sources. 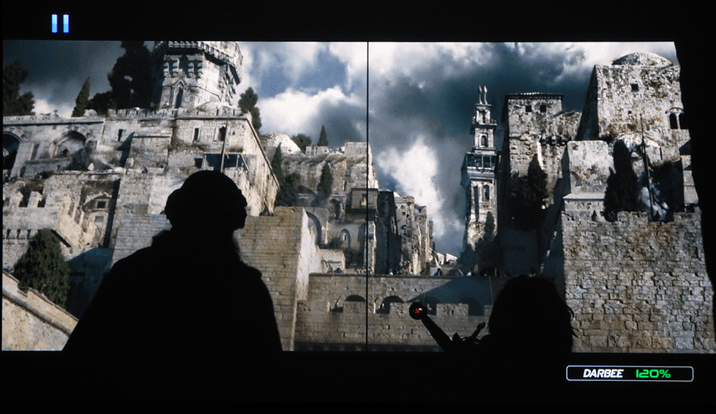 DARBEE Visual Presence video enhancement technology has made its way into a number of products, including Blu-ray players, video scalers, and projectors. In fact, we've already reviewed two products that feature DARBEE Visual Presence: the Oppo BDP-103D Blu-ray player and the Optoma HD28DSE projector (review coming soon). But what if all the elements of your HT system are already in place, yet you still want to enjoy the DARBEE effect? That's where the new DVP-5000S comes in. This simple, pocket-sized device can sit in between your sources and display and add the DARBEE enhancement to all your content?

What is DARBEE Visual Presence? Allow me to plagiarize myself, from my review of the Oppo player: It's a form of video processing that improves the sense of depth and clarity in the image by adjusting luminance values, using light and shadow in much the same way an artist does to create a sense of depth and detail in a painting. Unlike sharpness controls and other edge-enhancement technologies that add information to make the picture seem more detailed, or the contrast/black enhancement tools that just play with overall white and black levels, DARBEE Visual Presence works at the pixel level, changing luminance values and adding 3D visual cues by creating left and right frames within a 2D space to enhance the sense of depth, dimensionality, and consequently detail.

DarbeeVision introduced the original DVP-5000 standalone processor in 2012. The brand new DVP-5000S ($249 MSRP) keeps the same basic form factor as the original but incorporates the company's latest, most advanced algorithms. The box, which measures 4.63 by 2.25 by 0.75 inches and weighs just 4.7 ounces, has a nice brushed-black finish on its topside. It sports an HDMI 1.4 input on one end, an HDMI 1.4 output on the other, a power port (multiple adapters for different countries are included in the box), and a port to attach the supplied IR extender cable. One HDMI cable is included in the box.

The unit comes with an IR remote control that lacks backlighting but has a simple, intuitive layout with a total of 12 buttons. At the top is the DARBEE button that turns the effect on and off for quick before/after comparisons. There's a button for each DARBEE mode (more on this in a second), as well as +/- buttons to adjust the level/intensity and a Demo button that shows before/after through either a split screen or a screen wipe. Rounding out the controls are a Menu button that takes you to a very limited assortment of settings (since there's not much to adjust) and navigation arrows.

The DVP-5000S can pass a signal up to 1080p/60 (including 3D), but not 4K. Since the device has only one input and one output, setup is pretty straightforward. You can place the device directly between one source and your display or place it between your AV receiver/switcher and your display, to apply the effect to all of your sources. You could also place it between one source and your AV receiver, if you only wanted to apply the effect to a single source. I began my testing going directly from my Oppo BDP-103 Blu-ray player to an LG 65EF9500 OLED TV and, later, a JVC DLA-X750R projector.

When I first powered up the DVP-5000S, it was preset to the "High Def" mode, at a level of 100 percent. As I said, there are three modes: High Def, Gaming, and Full Pop. DarbeeVision says that the High Def mode has the "most refined and artifact-free output" and is best suited for Blu-ray and HDTV sources. Gaming is best for computer-generated animation and games, while Full Pop provides the "strongest depth and realism" and is better for lower-resolution sources like DVD and SDTV. Humorously, 100 percent is not the maximum level; the intensity of each mode can be adjusted in five-step increments from zero to 120 percent (in the settings menu, you can change this to single-step increments from zero to 120).

The DARBEE effect, at the maximum setting in any given mode, is not subtle. You'll have no trouble seeing the difference when using the Demo button or toggling between on/off. It basically uses light and shadow to accentuate the fine details in the image and make them pop out more. Instead of trying to describe the effect in the various movies I watched, I've included some photos here, taken in the split-screen demo mode so that you can see the before/after effect of the High Def mode at its maximum of 120 percent (click on each photo to view it in a larger window). I've also added the original photo slideshow from my Oppo BDP-103D review to provide some more examples; see below. I agree that the High Def mode is the most natural and artifact-free choice. You can see in the photos that there's definitely a greater sense of clarity, image texture, and depth with DARBEE Visual Presence engaged, but it also can make facial close-ups look unnatural and too harshly detailed, and it can accentuate noise in low-light situations. For me, an intensity setting of about 70 to 80 percent was as high as I was willing to go. At that level, the DVP-5000S strikes a good balance, providing a noticeable improvement in detail and crispness without looking too noisy and artificial. I had no issues with signal pass-through when inserting the DVP-5000S directly between source and display. Even when I cued up Blu-ray 3D discs, the 3D signal passed on to the LG TV just fine, and the detail-enhancing effects are just as obvious with 3D as they are with 2D. When I tried to add an AV receiver into the chain, however, I ran into issues. With the new Onkyo TX-RZ900 receiver, I got no video signal when trying to pass it through the DVP-5000S, no matter whether the source was 1080i from my Dish Hopper 3 DVR or 1080p from my Oppo player. When I switched to my older Harman/Kardon AVR 3700, the video passed through the DVP-5000S just fine. So the problem may lie with the Onkyo; perhaps its newer HDMI 2.0a inputs and output are causing an issue, although they should be backwards compatible. High Points
DARBEE Visual Presence adds a greater sense of depth and detail to your video sources.
There's a good range of adjustment within each mode to tailor the effect to your taste and source material.
The box is petite and easy to set up and use.

Low Points
• The box uses HDMI 1.4, not HDMI 2.0. It can't pass through 4K or HDR signals. DarbeeVision says it is working on a 4K solution.
• There's only one HDMI input. So, if you aren't using some type of HDMI switching device like an AV receiver, you would have to physically switch HDMI cables to use the DVP-5000S with multiple sources.
• The DVP-5000S did not pass signals sent from a new Onkyo HDMI 2.0a-equipped AV receiver. Comparison & Competition
The DarbeeVision DVP-5000S is a unique product and therefore doesn't really have a direct competitor. I suppose you could compare the DARBEE effect to what you get through the sharpness, Super Resolution, and other edge enhancement tools that may be built into your TV or projector already. Super Resolution can do a nice job of improving the sense of detail without adding too much extraneous noise, but I think DARBEE Visual Presence provides more obvious and customizable results.

Conclusion
The DarbeeVision DVP-5000S is an effective tool for enhancing the depth and detail of your current SD and HD sources. When used judiciously, DARBEE Visual Presence can be especially beneficial at larger screen sizes, like 100-inch-plus front-projection systems where image detail and sharpness can suffer a bit. When mated with the JVC DLA-X750R projector and a 100-inch screen, the DVP-5000S High Def mode did a nice job of adding crispness and clarifying the finest background details in my 1080p Blu-ray discs.

I do feel that the $250 asking price is somewhat steep, given the box's singular purpose and its single HDMI input/output configuration. Adding DARBEE Visual Presence to the Oppo BDP-103 increases the cost $100--from $499 to $599--which seems like a fair upgrade cost. And the Optoma HD28DSE projector with DARBEE Visual Presence costs only about $750 total. Some websites, like Crutchfield and Monoprice, are currently selling the DVP-5000S for $199, which is a bit better...and I suppose $250 is still cheaper than upgrading your display to 4K to try and eke out more detail. [Editor's note: DarbeeVision has announced an upcoming price reduction on the DVP-5000S: The new MSRP will be $224.99, and the new MAP will be $179. The new pricing will go into effect 7/7/16.]

DarbeeVision does offer a 30-day money-back guarantee. If you feel like you're just not getting everything you want from your current 1080p video system and you'd like to see if DARBEE can fill the gap, there's no risk to try it out for yourself.