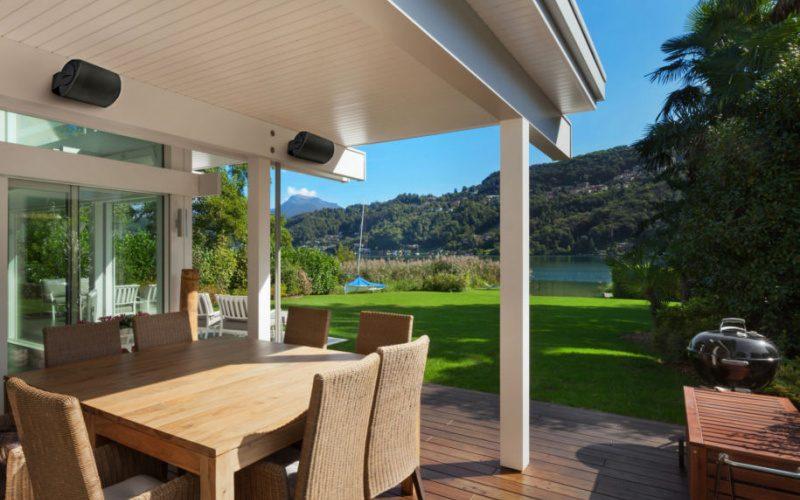 In recent years, I've opened up my audiophile horizons beyond the head-in-a-vice constraints of a dedicated listening room. One of my favorite ways to enjoy my music these days is outdoor listening. Not everybody lives in a locale that offers... 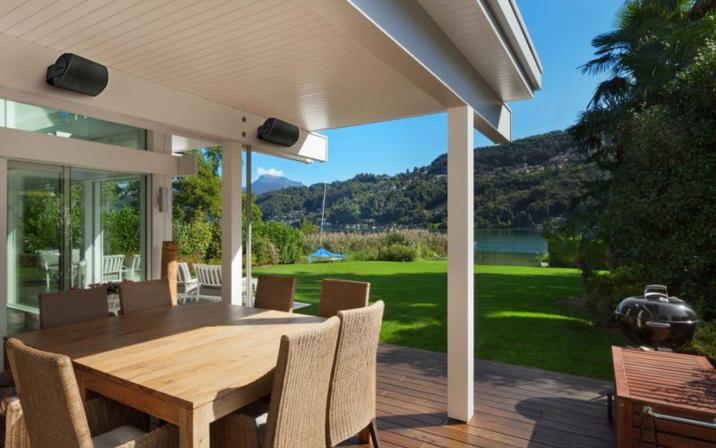 In recent years, I've opened up my audiophile horizons beyond the head-in-a-vice constraints of a dedicated listening room. One of my favorite ways to enjoy my music these days is outdoor listening. Not everybody lives in a locale that offers year-round outdoor listening opportunities, but I do, and as I tell my mother, "this is why houses sell for $1,300 per square foot around Southern California," versus my hometown of Philadelphia, which is far colder yet far more reasonable in terms of housing. In my last property, located in the same ZIP code as I live in today, I had a wonderful 8.2-channe outdoor system with each of the eight satellite speakers tuned specifically to the right level and with both monstrous 12-inch mushroom-like subwoofers buried in the landscape and also tuned to sound bold and robust but never too loud or overpowering. I could sit in the Jacuzzi and have music rocking so that I could feel the vibes but not piss off the neighbors. When we sold the house, I was able to pipe classical guitar into said 8.2 speaker system at just the right volume so that it graced the landscape over the gurgling of the pool's water feature during showings and open houses. It was really cool and I miss the system, as well as the pool, as we will never have such awesomeness at my current house.

My new home is situated on a cul-de-sac on a gated street in a gated neighborhood with neighborhood kids who ring the doorbell to ask if my son can come out and play, though, and that (plus going from 2,500 square feet to 3,700 feet) is a pretty significant upgrade. Another advantage is the improved view. Our new McMansion (to use a fair descriptor of the house) is built upside down, meaning that our living space is on the top floor and there are three more bedrooms and family room (home theater) downstairs. The balcony off of the living room, dining room, and kitchen boasts some pretty juicy views, as you can see quite a bit of ocean, Catalina Island, the bottommost Channel Island, and hippie-laden Topanga Canyon. With a western direction, we get to see the sun set over Malibu every night, which can be pretty dramatic. We've put fancy teak furniture on the balcony and re-floored the entire house (including the balcony) with pretty affordable but very elegant ceramic tile that, at under $6 per foot, brings inside living outdoors. The biggest upgrade to the balcony was the installation of Definitive Technology AW6500 speakers ($248/each). These all-weather speakers feature a 6.5-inch mid/woofer, a 5.5- by 10-inch passive radiator, and a one-inch tweeter, and are designed to bring music to your outdoor spaces while standing up to the most extreme elemental abuse. Because of the layout of the balcony, we used the provided brackets to mount the speakers above head height and positioned them to beam down. Sadly, there was no way to put them all on the same wall, so we mounted them to match the also-black outdoor lights. The speakers could be mounted vertically too, and perhaps might image more accurately that way. I just wasn't going to get an installation where I got perfect imaging outside, and that's OK, as most outdoor systems aren't designed for critical two-channel sessions, but rather for background music.


The Definitive Technology AW6500 comes in black or white. The black matched my lighting fixtures, and white might have look a bit out of place on top of the off-white exterior color of our Mediterranean styled house. The exterior of the speakers theoretically could be painted, but I opted not to do that. The PolyStone material that Definitive Technology uses for these speakers is plasticy but very rugged. They can definitely take a beating and still rock. The mounting brackets are galvanized steel and give a good radius to position the speakers to best perform in your environment.

A lot of what I play outside is more chill electronic music, and the Definitive Technology AW6500s just eat that genre up. I do fear that I have heard literally

every song in the Electronic-Lounge genre thanks to my playlists on Pandora, as well as some of the records, such as Thievery Corporation and Zero 7, that have been on high rotation in my playlists for over 20 years now.

Via Sonos, I dialed in a few tracks from Bonobo's groovy Black Sands record. "All in Forms" is a smooth track with lots of shimmering effects dancing over a rock-solid beat. The female vocal is designed to be distant sounding in the mix yet was able to create a vibe outside that was perfect for enjoying the evening weather while reading a book and chilling. The track has some good bass, and the Definitive Technology AW6500s did a suitable job bringing up the low end, although there wasn't the ultra-deep, full range sound that you hear from an outdoor system with a dedicated subwoofer, nor should you expect such low bass.

Bonobo - All In Forms


We have a nice new gas-powered Weber grill outside, and while working on some fresh-caught, early season salmon with Santa Maria dry rub from The Hitching Post (remember from the movie Sideways) I fired up the Definitive Technology AW6500s to some anger-the-neighbor levels with what I think is the best example of why Led Zeppelin is the single best band in the history of rock music: "The Wanton Song." The treacherous John Bonham beat and hard-cutting syncopation makes this track a real jam. The Definitive Technology AW6500s were able to bring some heft to the track in a space with no real walls. Robert Plant's voice was high-pitched but not tinny at all. The breakdown at the end of the track allowed me to hear how the speakers could nicely resolve more bombastic and complicated passages.

Another huge advantage of installing outdoor speakers is to be able to spin up a party playlist when you are entertaining. Powered by a 75-watt-per-channel Episode Dynamic series eight-channel distribution amp, the Definitive Technology AW6500s were a breeze to drive. On "Plush" by Stone Temple Pilots, I got a sense of the depth of the recording despite my odd-ball (forced) location. The ringing of the somewhat clean guitar in the chorus was pleasant and not a bit of shrill. The kick drum also had some nice weight to it.

"I'll Be Around" by The Spinners presented one hell of an open sound in a very open space with smooth vocals and a great sounding mix outside. The Definitive Technology AW6500s held up well with more dense songs such as "Monkey Wrench" by Foo Fighters, as the blaring guitars and break-neck Dave Grohl drumming sounded pretty damn good, even if I didn't have the nerve to keep the volume up that high for very long.


The Definitive Technology AW6500 has a smaller brother called the AW5500 that has a 5.25-inch driver versus a 6.5 inch driver. I like a fuller sound, though, so it wasn't that hard a decision to buck up for the bigger speakers.

I used the Paradigm Stylus 470 speakers outside in my old outdoor system and they were fantastic for what they did, but the Definitive Technology AW6500s have a more full-bodied sound because of the large passive radiator. The Paradigms were also pretty well prepared for the abuses of being installed outside, though, especially this close to the ocean.

There are all sorts of other options for outdoor speakers, ranging from Episode Speakers, Bowers & Wilkins, Rockoustics, Sonance, Polk... the list goes on.

Conclusion
I don't mean to harp on the bass issue here, especially given that the Definitive Technology AW6500s might have the best/deepest bass of any speaker in their category or form factor, but I am probably going to buy a nice planter and bury a subwoofer in there with an herb garden planted around the port. I just miss having that extra bass reinforcement in my outdoor system. That said, if you don't have a place to bury a sub and you still like a bit of bottom-end kick, this is an outdoor speaker you should definitely consider. It's one of the few in this size class that I could imagine running without a sub at all.

I love the concept of music outside and have a lower level garden going in later this spring that will get a 5.2-channel Polk Audio outdoor system installed in the plants. The Definitive Technology AW6500s, for a very fair price, have brought music to my balcony, which has made living at my new house notably more enjoyable, and that is an absolute win.