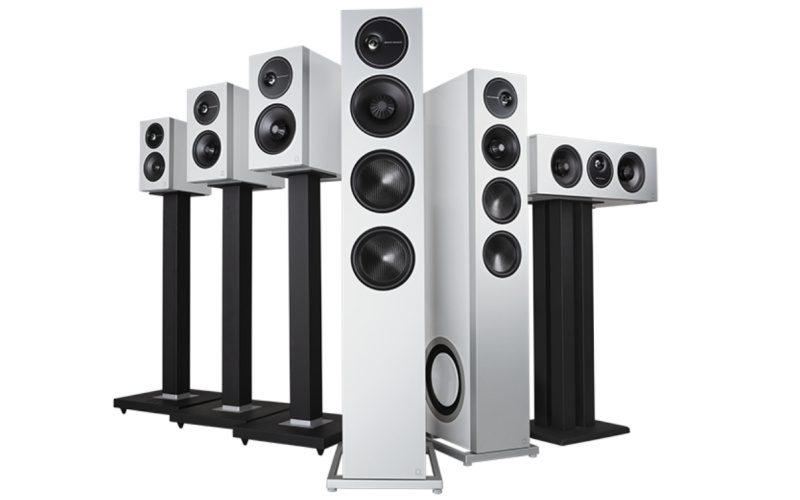 I've had a pretty great home theater rig for many moons now, but it's never been more relevant than it is now, with commercial cinemas being closed. What most of us need right now is escapism and entertainment, and what provides better escapism and entertainment than a private cinema of your own? So, it may seem counterintuitive to be researching and purchasing gear with all the economic uncertainty of the moment we're living in, but I would argue that if you have the means, now is an epic time to imbibe. OK, soapbox, I will step off you now.

Rolling back the clock more years than I care to count, my first serious home theater purchase was a set of Definitive Technology's Mythos speakers, which are still part of a smaller setup in my den. So I had a pretty reasonable level of expectations when Definitive Technology offered to send me a system from its Demand Series line for review. The review system is comprised of the Demand D17 floorstanders ($2,299/each), the Demand D5C center channel ($799), and the Demand D9 standmount surrounds ($859/pair), for a total system price of $6,256. 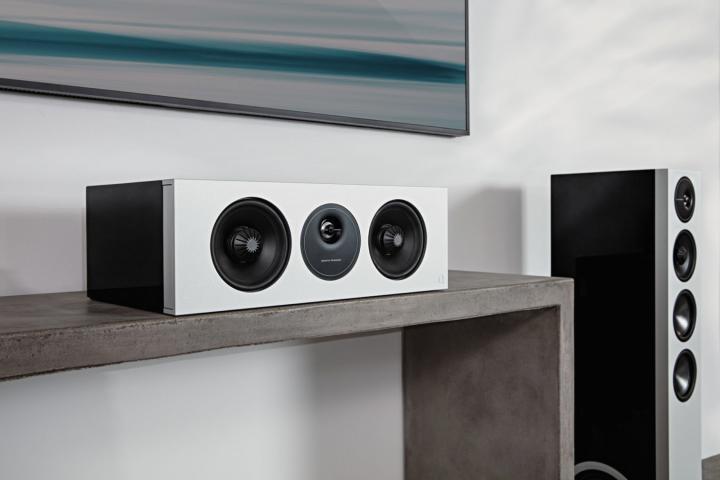 I'd be remiss if I didn't go into a bit of detail about the beauty of these speakers, prior to discussing their specs. Having floorstanding towers that complement your décor is not only key to good design, it typically aids in spousal approval. In the case of the Def Techs, they're best described as modern, clean, and somewhat flashy, at least in the case of my gloss white review samples, and especially with the grilles removed. The cabinets, also available in piano black, are MDF, with aluminum front baffles. The grilles are a tasteful light grey, a welcome respite from common black and a suitable companion to the gloss white. With the Demands, the grilles dramatically impact the aesthetic – on for a more minimalist approach and off for something a bit more Frank Gehry. 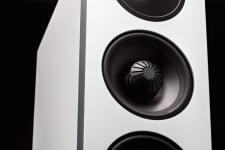 Their feature list is plentiful; as such I'll provide the topline points, as well as a link below for those who enjoy a deep dive. The fronts and rears are bi-amp capable, but the center channel isn't. The D17 floorstanders are a three-way design, with a patented 6.5-inch BDSS midrange driver, said to expand both output and detail compared to similarly sized drivers. The tweeter, a one-inch, annealed aluminum dome design, is offset, thereby reducing diffraction and resulting in more precise imaging. Annealing a metal, put simply, heat treats it so you can manipulate it. If you want to geek out on annealing, the good folks at Definitive can help.

Providing the low-end on the D17s are dual 6.5-inch carbon fiber woofers and dual 10-inch passive radiators. Overall frequency response is a reported 33 Hz to 25,000 Hz. The towers weigh 64 pounds each and measure 43.25 inches high by 10.17 inches wide and 14.72 inches deep. The D5C center channel shares the tweeter and BDSS midrange drivers of the D17s, though the latter are a bit smaller, with dual 5.25-inch drivers. Overall frequency response is reported as 42 Hz to 22,000 Hz. The D5C weighs 24 pounds and measures 6.58 inches high by 19 inches wide by 11.24 inches deep. 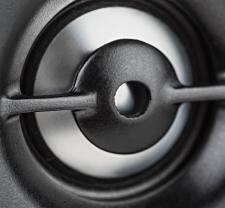 The D9 surrounds have the same tweeter and 5.25-inch midrange driver (one) as the D5C, but also add a passive bass radiator for some added oomph on the low end. Overall frequency response is specified as 48 Hz to 24,000 Hz, and they're of reasonable size to use as surrounds at 11.71 inches high by 6.5 inches wide by 11.97 inches deep.

Hookup
I began by connecting the speakers to a Marantz SR7013 AV, on loan from Sound United, using Wireworld Solstice 8 speaker cables. Source components include a Macbook Pro, connected through a somewhat modest, but more than capable Arcam irDAC, an LG Ultra HD Blu-ray player, and my MusicHall MMF2.2 turntable.

The design elements of the tweeter help with off-axis listening, thereby providing a bit of forgiveness on speaker placement. After some minor toe-in adjustments of both the D17 fronts and D9 rears and adequate break-in time, I began critical listening.


The word I kept writing in my notes during just about every listening session was "immersive," especially with regard to watching movies, particularly Ford v Ferrari via iTunes. It was during this film that the D9 rears shone most brightly, putting me in the driver's seat in each of the film's many racing scenes, drawing just enough attention to themselves, but not overwhelmingly so.

The addition of the D9's passive radiator was evident as well, providing additional low-end from the surrounds as needed. Another thing I noticed right away, and continued to notice with other films, was that the dialogue was a bit more natural than what my Monitor Audio Silver C150 produces.


Another favorite demo is Dunkirk, as director Christopher Nolan is a freak when it comes to attention to detail – both from an audio and visual standpoint. Despite the inherent aural chaos in the action-heavy sequences, the dialogue from D5C center channel remained focused and coherent. This is obviously a war film, which puts strain on every speaker in a 5.1 or, in this case, 5.2 speaker rig, but the Demands more than held their own.

I found the dogfighting scenes especially compelling, with bullets flying from the Spitfires and blowing past my head from the rear to the front with stunning realism; it was actually quite terrifying listening to the shredding of the plane fuselage. Compared to my reference system, I found them to be more engaging, more transparent, and simply more entertaining. To be fair though, this does include a swap from one sub to two SVS behemoths and a system cost differential of roughly three grand. Do the D17 floorstanders provide enough low end to skip a sub? Not for me, especially when watching movies, but for some, especially on music, they'd be just fine.

Moving from film to music, I began by testing the mettle of the D17 floorstanders with some two-channel vinyl in the form of Gary Clarke Jr. Live, a pretty spectacular double-album. The album begins with an eight-minute tour de force in the form of "Catfish Blues." This track showcases not only Gary's aptitude with an Epiphone Casino, but also his often-overlooked vocal prowess. There's a nice guitar build in the beginning, prior to the percussion kicking in, and it was breathtaking on the D17s. The soundstage is what shown most brightly here, as it was deep and wide, exactly what's demanded on a good live cut. But it's the midrange especially that really blew me away, as vocals were detailed and engaging.


Next, I cued up Anderson and Roe's piano rendition of Michael Jackson's "Billy Jean," streamed via Qobuz. The first word I wrote in my listening notes was "Wow." These two piano aficionados literally attack the keys on this track and again, I was taken aback by how lively and engaging it sounded.

There's a sort of violence to this track, which makes it unlistenable on sub-par systems. I played it in two-channel, played around with the various surround modes to engage all of the speakers, etc., and ended up listening to this track at least five or six times, always a good sign. Transients were handled with aplomb, and the overall presentation was the best I've heard on this familiar track in years. The Demands are fast, accurate and transparent; in many hours of playback, I never found any particular fault in terms of their sonic signature.


I also put the system through its paces with some multi-channel music in the form of the Dave Matthews/Blue Man Group joint "Sing Along," from an old DTS demo disc I picked up many moons ago at CES (also available on the DVD-Audio release of the The Complex). The first thing that struck me, while doing a bit of A/B with and without the subs, was that the Demands held up quite well on their own. While I prefer the enhanced bottom-end provided by the subs, especially with the volume cranked, the bass drivers and passive radiators of the D17s performed admirably with a track that hits pretty hard. I also noted that the Demands image exceptionally well, but be careful with the source material here as their transparency can bite you. Dave's raspy-yet-somehow-still-soothing voice hung in the air pleasantly at center stage and a tad beyond. As for the oddball instruments made by Blue Man, the whip stood out as it danced perceptively around my listening room. Overall, the Demands produced a lively and compelling representation of this very cool team-up.

The Downside
As I just mentioned, I'd have to really reach to find fault with the Demands, sonically or aesthetically speaking. Even the stands have a well designed and thoughtful aesthetic. That said, I've never reviewed a product that didn't have at least one thing that bothered me, and these beauties are no exception. At this price point, the grilles, once you get them off the speakers and into your hands, are a bit on the flimsy side. Let's say, hypothetically, you were to pull them off and set them aside lazily in your theater room. Let's also say that they were placed directly in the path of both a 10-year-old boy and a rather lively Australian Shepherd. I'll let you put the rest of the story together.

Competition and Comparison
It's difficult to play around near the Demand system's price point and not mention GoldenEar and their exceptional Triton series. While you can't get the top of the line Triton One.R towers at this price point, you can look at the Triton Twos and actually save about $750 on the pair, then maybe use that savings toward your center and surrounds.

If the overall price point of the Demands is a bit out of your reach, you might consider the Monitor Audio Silver line mentioned above. I reviewed them and subsequently purchased them, no higher praise than that. Just be prepared to lose some resolution, low-end authority and transparency in the process. Such is the game.

Or you can stick with Demands and swap the D17s for the D15s, thereby saving $1,200. You'll retain that sweet sweet tweeter, but you'll drop in size on the midrange, woofer, and passive radiators. Need to save a few more bucks to pull it off? Swap the D9s for the D7s and save another roughly $600. You'll still get the tweeter and the same BDSS midrange, but you'll lose the passive radiator.

Conclusion
The Definitive Technology Demand D17, D5C, and D9 collection are, given their performance, design, and price point, somewhat of a bargain. I say somewhat, as we have a broad audience here at HomeTheaterReview, some of whom will likely laugh at this comment. But, when you can safely place a $6,300 set of speakers in a room where someone has spent tens of thousands on furniture and design, that's truly an accomplishment. When this level of performance accompanies said setup, it becomes remarkable. This is a setup for someone who cares as much, or maybe almost as much, about design as they do performance. And it's another arrow in Definitive Technology's always expanding quiver.

MartinLogan Motion 20i, 15i, and 30i Speakers Reviewed
Check Price With Vendor

You'll automatically be entered in the HTR Sweepstakes, and get the hottest audio deals directly in your inbox.
0 0 votes
Article Rating
Subscribe
Connect withD
Login
Connect withD
0 Comments
Inline Feedbacks
View all comments
Author
Sean Killebrew
HomeTheaterReview Product Rating
Value:
Performance:
Overall Rating:
Check Product Price
When you buy through links on our site, we may earn an affiliate commission. Your support is greatly appreciated!
This is the static ad content. This is just a placeholder for now to get things styled.
Visit Website