If you want to listen to music from your smartphone, tablet, or laptop and not deal with poor sound from the internal speakers, the Definitive Technology Sound Cylinder Bluetooth speaker may be the answer. Darryl Wilkinson reviews it to find out. 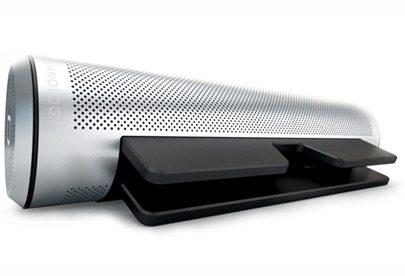 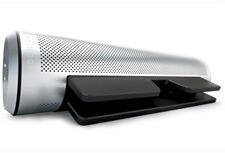 Although the Era of the Earbud has nowhere near reached its end, there are signs that the ever-growing proliferation of smart phones and, especially, tablets is encouraging a renaissance in desktop audio. Of course, the market is crowded with plenty of horrid-sounding $10 and $20 “mini portable speakers” designed to be used with laptops and smartphones; however, some companies are beginning to make quality portable alternatives that, while not able to rival an honest-to-goodness desktop speaker/amp combo, are surprisingly enjoyable to hear. Definitive Technology’s Sound Cylinder isn’t the most expensive personal audio speaker you can buy, but it is one of the most versatile and enjoyable systems on the market.

The Sound Cylinder is a 7.5-inch-long, 1.9-inch-diameter sleek silver cylinder, with small perforations along the entire front of the aluminum and magnesium chassis. The industrial design is extremely clever and noteworthy in several respects. First of all, running along the top of the cylinder is a 5.5-inch-long rubberized clamp with an extremely strong spring mechanism that allows it to securely grip onto any smartphone, tablet, or even laptop screen (as long at it’s at least 0.38 inches thick). Second, built into the back of the Sound Cylinder is a very sturdy kickstand that allows the speaker to hold a tablet in a near-upright position, making it very convenient to use on a desk or tabletop. When not needed, the kickstand folds flush into the back of the Sound Cylinder, so it’s out of the way if the speaker is being used in a different orientation or being transported in a briefcase or backpack.

The Sound Cylinder is a 2.1-channel, bi-amplified system that incorporates two front-firing, 1.25-inch mid/high-frequency drivers. On one end of the cylindrical system is a side-firing 1.7-inch mini-woofer driver. Digital signal processing (DSP) is used to contour the speakers’ response based on volume level, as well as to expand the sonic image using Surround Array processing technology that’s similar to what Definitive Technology uses in the company’s active home theater soundbars. The Sound Cylinder includes auto-pairing Bluetooth connectivity – capable of decoding Advanced Audio Coding (AAC) encoded streams – plus a 3.5mm analog stereo audio input jack. The internal battery, which is rated for up to ten hours of use, is rechargeable via a micro USB connection or power supply.

The Sound Cylinder is definitively gorgeous, but when you first look at it, it’s hard to believe that it can produce anything other than wimpy, trebly, pierce-your-eardrums sound. It actually produces sound quality that rivals, if not surpasses, its high-performance appearance. The bass performance is likely the most surprising aspect of the Sound Cylinder. The bass is not room-shaking – or even desktop-shaking – but it is amazingly convincing and full. Cymbals, sibilants and other high-frequency elements in music are clear and present without being gritty or harsh. Another pleasant surprise with the Sound Cylinder is the sense of width that it is able to create in the soundstage. Sitting on top of my laptop, for example, music sounded as if it were coming from speakers mounted on the sides of the screen, rather than from a 7.5-inch bar sitting on the top.

If you’re into heavy-duty action flicks, the Sound Cylinder won’t trick you into thinking there’s a separate subwoofer in the room; however, when sitting on a desktop and holding an iPad, it will do a highly respectable job of putting out low bass effects. Definitive Technology’s Sound Array processing doesn’t perform miracles, so there’s no way you’ll get the impression that sound effects are coming from behind your head. You will, however, become convinced that the Sound Cylinder is capable of performing magic, because in my experience, it is able to take elements of a movie soundtrack – both in the music and the surround effects – and place them out to the sides up to 45 degrees off-center. I found the spaciousness and overall smooth sound quality to be extremely compelling and worth the $199 price tag all by itself. The other design and convenience elements that come as part of the overall package make it an absolute bargain.

Read about the high points and low points of the Sound Cylinder on Page 2.

Low Points
The Sound Cylinder’s built-in volume control is located on one end of the cylinder, making it somewhat inconvenient to reach if you need to make an adjustment.
The Sound Cylinder’s clamp doesn’t close together enough to grip thin laptop screens, such as a MacBook Air.
Because the spring used in the kickstand is so strong, the Sound Cylinder has a slight tendency to tip forward when used with small devices, such as smartphones.
You cannot turn off Bluetooth connectivity so, when using the input jack, the Sound Cylinder will sometimes try to auto-pair with a nearby Bluetooth device if the two have previously been paired with one another.

Comparison and Competition
Everyone and their brother make an “i-speaker” of some sort to use with tablets and phones, but most of them are cheap and cheesy. There are, however, a number of well-designed, respectable-sounding speakers starting to appear on the market, typically in $150 to $300 range. The Sound Cylinder easily ranks among the top performers in this category, but other models can be deserving of consideration when it comes to sound performance, portability and size. Among them are the Bose SoundLink Bluetooth Mobile Speaker II ($299), the customizable, amp-enhanced Jawbone Jambox ($179), the Logitech UE Boombox ($249), the Beats by Dr. Dre Pill Wireless Bluetooth Speaker ($199.95), the Monster ClarityHD Micro Portable Bluetooth Speaker ($229.95) and the iPad-only Belkin Thunderstorm Handheld Home Theater ($199).

You'll automatically be entered in the HTR Sweepstakes, and get the hottest audio deals directly in your inbox.
0 0 vote
Article Rating
Subscribe
Connect withD
Login
Connect withD
0 Comments
Inline Feedbacks
View all comments
Author
Darryl Wilkinson
HomeTheaterReview Product Rating
Value:
Performance:
Overall Rating:
When you buy through links on our site, we may earn an affiliate commission. Your support is greatly appreciated!
This is the static ad content. This is just a placeholder for now to get things styled.
Visit Website