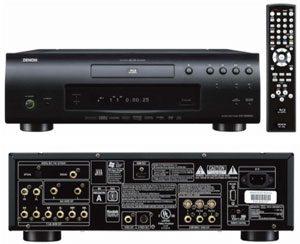 The Denon DVD-3800BDCi is the flagship model in Denon's Blu-ray lineup, primarily because it uses Silicon Optix's highest level chipset, the Realta sxT2 HQV chip. The $1,999 DVD-3800BDCi is a Profile 1.1 Blu-ray player, which means it contains the secondary audio and video decoders needed for picture-in-picture playback. However, it does not support BD-Live Web functionality.

In terms of video connections, the player offers HDMI, component video (with both BNC- and RCA-style connectors), S-video, and composite video outputs. For HDMI, the output-resolution options are Auto, 480p, 720p, 1080i, 1080p/60, and 1080p/24. While this player lacks a Source Direct output mode, it provides separate 1080p/60 and 1080p/24 modes so you can easily switch between the two for comparison. For component video, output-resolution options are 480i, 480p, 720p, and 1080i; 1080i the maximum output resolution for Blu-ray, and 480p is the maximum output resolution for standard-def DVDs. In the audio realm, the DVD-3800BDCi offers HDMI, coaxial and optical digital audio, and two- and 7.1-channel analog audio outputs. The player has internal Dolby TrueHD and DTS-HD decoders, and it will also pass these formats in their native bitstream form over HDMI, for your receiver to decode. This gives you nice flexibility when mating this device with an A/V receiver.

Given the unit's higher-end price tag, one expects the ability to integrate the player into an advanced control system, and the DVD3800BDCi does not disappoint. It offers both RS-232 and IR input and output ports. The player supports BD, DVD, CD, MP3, WMA, JPEG, and Divx playback through its disc drive, and it has an SD card slot through which you can view JPEGs and listen to MP3/WMA audio files. Unfortunately, it does not have an Ethernet port to access BD-Live Web features on Blu-ray discs or to perform quick firmware updates.

The use of the Realta chipset results in excellent picture quality with both high- and standard-definition discs, and the menu includes a number of advanced video adjustments, in case they are missing from your TV's setup menu: digital noise reduction, gamma correction, sharpness settings, hue, white level, black level, chroma, and more. The player also offers excellent audio performance with all sources. Not to ignore lovers of high-quality music, the DVD-3800BDCi even has a Pure Direct mode that shuts down unneeded video circuitry to achieve higher-quality audio through the analog audio outputs.

Read more about the high points and low points of the DVD-3800BDCi on Page 2.

Highs Points
• Blu-ray movies look outstanding, at both 1080p/60 and 1080p/24.
• Video upconversion of standard definition DVDs was excellent, Fans of legacy formats like DVD will be very pleased.
• The player has onboard high-resolution audio decoding and passes HD audio formats in bitstream form over HDMI.
• It can play picture-in-picture bonus content, such as video commentaries and making-of featurettes.
• The SD card slot allows for easy playback of digital music and photos.

Low Points
• The DVD-3800 lacks an Ethernet port, so you can't access Web features on Blu-ray discs or update firmware from the Internet directly.
• The beefy chassis gives the player a high-end feel but takes up more space than most newer Blu-ray players.
• Start-up, load, and navigation are a bit sluggish compared with the fastest players we've most recently tested.

Conclusion
Denon's DVD-3800BDCi is priced at a premium, but its video and audio performance are up to the task. Both Blu-ray and DVD movies look excellent. The player offers most of the desirable Blu-ray features, like 1080p/24 playback, PIP ability, and both decoding and bitstream output of Dolby TrueHD and DTS-HD. The only missing link is BD-Live functionality; but, if accessing Web content isn't a huge issue for you, the DVD-38700BDCi delivers in all other respects.