Devialet Announces Its Most Powerful Phantom Speaker to Date

Devialet Announces Its Most Powerful Phantom Speaker to Date

Devialet has unveiled its most powerful, high-performance Phantom speaker to date. The Gold Phantom boasts 4,500 watts of power, and Devialet lists its maximum volume at 108 dB. The original Phantom powered speaker turned a lot of heads and earned... 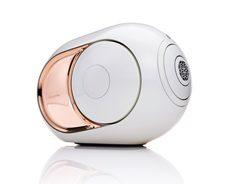 Devialet has unveiled its most powerful, high-performance Phantom speaker to date. The Gold Phantom boasts 4,500 watts of power, and Devialet lists its maximum volume at 108 dB. The original Phantom powered speaker turned a lot of heads and earned a lot of awards in 2015, and Devialet says the new speaker can produce an even wider frequency range--from 14 Hz to 27 kHz. Like its predecessors, the Gold Phantom includes both Wi-Fi and Bluetooth for wireless audio streaming. The unique design is highlighted by 22-karat Rose Gold accents. The Gold Phantom will ship on July 14.

From Devialet
Devialet has announced the Gold Phantom, the most extreme speaker ever made, incorporating:

• EXTREME JUBILATION: Physical impact of the deepest bass ever reproduced (14 Hz) and the unmatched precision of a new titanium tweeter, up to 27 kHz--both driven by a new core ADH (Analog Digital Hybrid amplification)

The Gold Phantom now represents the highest end of the acclaimed range of Devialet Phantom audio products, including the original Phantom (750 watts, $1,990) and the Silver Phantom (3,000 watts, $2,390). The Gold Phantom will be available at a retail price of $2,990, with pre-orders starting June 28 on www.devialet.com and shipping beginning (appropriately) on Bastille Day, the 14th of July 2016.

Here's how Devialet describes the Phantom technology:
Capable of reproducing the soundstage and musicality of speakers 20 times its size, this is achieved by increasing the maximum air pressure inside the PHANTOM enclosure to the level associated with a rocket launch. By using speakers that are flush with the surface of a perfect sphere, the PHANTOM also offers a unique portable design entirely derived from the laws of acoustics and providing a combination of the best music reproduction with an optimal sound directivity pattern.

At the heart of the ANTOM is Devialet's own technology platform, known as ADH Intelligence, combining the refinement of Analog (or Class A) amplification with the power of Digital (or Class D) amplification. The company's SAM Processing technology is then used to control the speakers to perfection, reproducing the exact acoustic pressure recorded by the microphone.

Together, these innovations deliver Heart Bass Implosion or HBI, which consists of two Devialet-exclusive high-excursion bass drivers moving in perfect symmetry. This creates a sound that has an actual physical impact and a density never before achieved.