Call your broker because Dish Network's profits are taking a nosedive. The company blames litigation over DVR services for the loss of profit. The "low cost" satellite provider is trying to keep up with DirecTV who also has the NFL exclusively on their sports package. 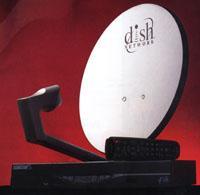 While satellite HDTV provider, Dish Network's revenue was pretty much flat, their profits as reported this past Monday are flat lining - off 81 percent from a year ago. Dish has been aggressively advertising that they are the "low cost" provider with the most HDTV; however reported litigation costs from a battle over DVR technologies with TiVo are costing the firm deeply.

Dish Network added 26,000 new subscribers in the last quarter but that hasn't helped their profitability woes. DirecTV's deal with the National Football League is wildly profitable and some argue is more important to the competing satellite firm because it keeps subscribers loyal to the serve, as DirecTV's Sunday Ticket program is the only way to guarantee that fans can see out of market NFL games week in and week out.

Critics suggest that if the TiVo lawsuit goes badly for EchoStar (the parent of Dish Network), their entire hardware system might need to be replaced, which could very possibly affect profitability in the future. DirecTV is rumored to be getting back into bed with TiVo after an odd technological divorce a few years back.