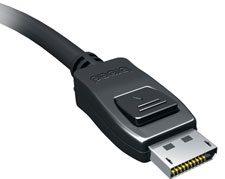 Anyone who has been burned by an HDMI handshake or watched the value of their AV receiver or HDMI-based AV preamp go down the toilet knows the pains that come from being on the bleeding edge of technology. Up until recently, there haven't been many competitors for HDMI and any analog option is long outdated. DisplayPort is working to gain ground in the world of UltraHD in its fight to take over for HDMI. Will they pull it off? Time will tell but 2013 has been a pretty fruitful year as UHD in terms of new companies adding the HDMI alternative.

The Video Electronics Standards Association announced today that it certified 300 new DisplayPort products in 2013, a 63% increase in the number of certified products. Products that passed VESA's rigorous compliance test, which qualifies products to feature the distinctive orange-and-black DisplayPort logo, include desktop and notebook computers, displays, graphic cards, cables and adaptors. This year, for the first time, 4K Ultra-HD (UHD) televisions and 4K computer displays have also been DisplayPort certified and introduced into the market.

DisplayPort is the world's most advanced, high data rate video interface standard. It connects computers and other video sources to televisions and displays, while maintaining backward compatibility with VGA, DVI and HDMI. Backed by more than 200 technology leaders worldwide, DisplayPort is supported by all of the world's leading processor and graphic chip companies, the world's top computer manufactures, and the world's top display manufacturers. Market research firms estimate that several hundred million individual DisplayPort products are sold every year.

Designed to be robustly 'future proof' as well as backward compatible, DisplayPort is the only video interface that can support the newest generation of 4K UHD TVs and displays with deep color at 60 frames per second. Several DisplayPort certified 4K systems are already available for purchase.

To maintain DisplayPort's technical lead, VESA announced several initiatives during the past year, including a new DisplayID 1.3 standard that will enable innovative display features at resolutions higher than 4K, and development of a micro-DisplayPort connector, which will be used by smartphones, ultra-thins and other small form factor video sources.

"DisplayPort is a flexible and robust standard because it is based on an adaptable packet-based architecture," said Craig Wiley, Sr. Director of Marketing for VESA member Parade Technologies, and Chair of the VESA Board of Directors. "Because of its many advantages, DisplayPort was chosen as a core technology for Thunderbolt, and as the internal video connection for almost all new high resolution notebook computer designs."

You'll automatically be entered in the HTR Sweepstakes, and get the hottest audio deals directly in your inbox.
Author
hometheater
When you buy through links on our site, we may earn an affiliate commission. Your support is greatly appreciated!