Does Generation Y Like The Sound of MP3s Over CDs?

Does Generation Y Like The Sound of MP3s Over CDs?

There is a claim being made that the newer generation of music listeners prefer the sound of the MP3 format over that of the compact disc. Dr. Sean Olive an experiment to test this theory out. 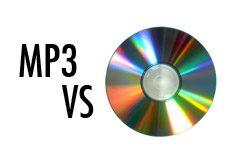 Dr. Sean Olive from the executive team of Harman recently invited some select members of the press to visit their Northridge, California compound. The purpose of this visit was to hear the doctor's presentation on a compelling study that he recently finished on the topic of Generation Y possibly liking the lower-resolution sound of MP3 files better than that of full-resolution files from a compact disc. The sound from a compact disc has much more resolution and is much less compressed, but sources such as Wired Magazine and the New York Times have been floating non-scientific test balloons up with the idea that the largest generation ever, Generation Y, actually prefers the sound of lower-resolution to that of a higher-resolution compact disc. The editors are pulling inspiration from an unpublished study from Stanford University. The idea of kids choosing low-resolution MP3s over higher-resolution CDs isn't that farfetched if you think about it. Kids will often pick junk food over fine dining, so is it possible that they might do the same for what goes into their ears?

Additional Resources
• Read more original commentary in our Feature News Stories section.
• See more music industry news from HomeTheaterReview.com.
• Learn about how headphones are a gateway for the next generation.

Dr. Olive dug in with the goal of reporting on his findings to the Audio Engineering Society and the world at large. He brought in test subjects in the Generation Y age range, including kids from the Los Angeles Unified School district via a local high school, as well as 40 college and grad students from Loyola Marymount, University of California Irvine, Cal Arts and beyond. There was also a test group of professional listeners that Harman uses for internal projects, so the test data was gathered from a subject pool that ran from very experienced listeners to grad students who have studied audio and music playback to kids who just know what they like to hear. Dr. Olive had the whole spectrum.

The listening samples included both 128 MPS files and full-resolution (1440) files from compact discs, with musical material that ranged from audience applause to Jennifer Warnes and beyond. The double-blind tests were conducted in one of Harman's many testing facilities. The material was programmed randomly, played for nine listeners at a time sitting in two rows, with an average playback level at 78 db. The tests lasted no longer than 30 minutes. The room was acoustically treated and outfitted with a good audiophile-grade system.

The results, you ask? Everybody liked the compact disc audio better. No one group had a significant preference for MP3 over CD, contrary to the earlier hypothesis. The more highly-trained listeners tended to have a slightly stronger preference for the sound of the compact disc than did the less-trained listeners but, overall, everyone pretty much agreed on what sounded best.

The study went into some other questions, such as "Does Generation Y prefer higher-end speakers?" and "Do people from other countries have different tastes regarding loudspeakers?". Dr. Olive's full study can be read here to explore these topics.

As for the issue of Generation Y being able to clearly hear the difference in higher-resolution audio, this study should end the question as to whether higher resolution is better. Honestly, it should have been easier to make the point, but Dr. Olive really broke out some beakers and Bunsen burners to prove it. Kids buy EA Sports Madden Football to the tune of over 5,000,000 units at a price of over $50 per disc every year. Why? Because it's a great game with great audio and video effects, delivered in a format that is HD. Blindly hopeful audiophiles suggest that Generation Y is bringing back vinyl. They are not. Vinyl sells for less than $10 per new pressing and, when you look at the Soundscan numbers for all vinyl sold in 2010, you learn that the entire format sold just above the RIAA standard for a multi-platinum record.. That's right: every record on vinyl that sold in 2010 total equals one-twentieth of what Thriller sold on its own back in the day. Simply put, that's not enough volume to bet the farm on a low-res, standard-definition format. Generation Y loves music possibly more than any previous generation has. They have media, including music, in their lives nearly every waking minute of the day, but they clearly do not want low-resolution media if given the choice of higher-resolution media. They want the HD effect, be it a jolt from a Monster energy drink, the rush of an X-Games trick or stunning 1080p video and uncompressed 24-bit 7.1 audio playback from Blu-ray. If you want to get the attention of this all-important demographic, you need to grab it with sheer technological force. They want the WOW factor and don't have a ton of money to spend on it - yet.

What I would like to have seen in the study is a third comparison including the same music/audio played back at 24-bit 192 kHz. All-knowing record executives suggest that the record-buying public simply can't hear the difference. With respect, that's total bullshit and I would like to see Dr. Olive prove it to them with facts. I am suggesting that anyone with any modicum of hearing left in their ears can easily discern the difference between the audio that a Blu-ray disc can deliver vs. what you get via a 30-plus-year-old compact disc. The increased resolution, plus the 120 dB dynamic range, allows a disc to play back audio in a way that is more analogous to the master tape. I bet that each and every group would demonstrate this in a study similar to the one that Dr. Olive has conducted. What would be interesting to see is how much more they like music in HD vs. music in SD (i.e., the compact disc) vs. music in S (I call it S, because MP3 files simply suck for audio quality).

The labels will say that the physical disc is dead and that downloads are the only way to go. They are wrong again. A $59 Blu-ray player can hook up to most AV systems via a $10 HDMI cable and provide a physically superior audio and video experience with 24/192 audio to 7.1 channels, while packing 1080p video as needed. Oh, and unlike the CD that the labels are still trying to sell for $15.95, the Blu-ray comes with copy protection that's pretty hard to break. The CD has no copy protection at all.

More people love music today than ever before - that's the good news. The idea that the major labels refuse to sell it at any level of high resolution is nothing short of a crime against the arts. Hollywood studios give you theater-quality surround sound on Blu-ray, yet I can't hear Electric Ladyland as close to the master tape as possible. Where is Congress when you need them? (Wait, don't answer that.) As for downloads, it would take Apple embracing music in HD to push past Blu-ray, as Apple is the dominant force in music sales, yet the Kings of Cupertino are focused on how to get media, apps and other goodies streaming wirelessly to your iPad, iPhone and pending Apple-based television. They are not focused on HD audio. Boutique audio companies like HD Tracks are tuned into HD audio, but offer too few records to appeal to buyers beyond the audiop
hile community. The majors and Apple could change the way we listen to music and give us reason to buy more high-performance audiophile equipment, yet they don't think we can hear it. Dr. Olive should prove it to them, as he has proven the MP3s-sound-better theory is wrong.

Additional Resources
• Read more original commentary in our Feature News Stories section.
• See more music industry news from HomeTheaterReview.com.
• Learn about how headphones are a gateway for the next generation.