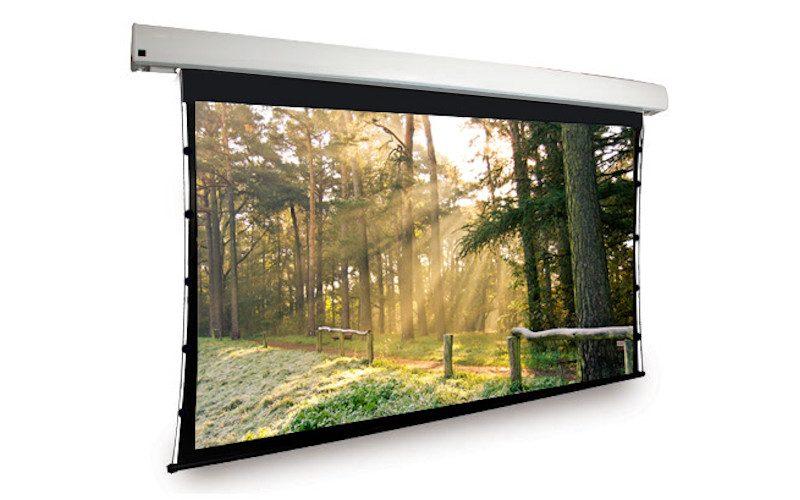 Dragonfly may not be a name you are familiar with, but if the Motorized Tab Tension screen that Andrew Robinson got in for review is any indication of the company's products, you should start becoming familiar with them. 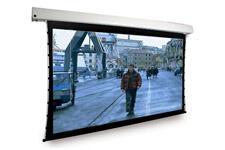 Not all screens are created equal though at their core they endeavor to accomplish the same function -to provide your front projector with the perfect surface with which to project its HD goodness upon. Some of the ways screens accomplish this feat is through the use of materials, tab tensioning, masking and construction methods; all of which add to a screen's overall cost. Another contributor to a screen's cost is its size, the larger the size the higher the cost for you simply need more of the before mentioned items to pull off a larger screen size. This is why it's not uncommon for many top-performing screens to cost more than the very projectors being used to shine light upon them. Now, there are a variety of affordable screens out there, I've even owned a few, but I have yet to come across one that embodies much of what makes costlier screens great while still maintaining some semblance of affordability like the Dragonfly screen reviewed here.

The Dragonfly screen in question is their motorized, tab tensioned 100-inch screen, which is offered in your choice of matte white (1.2 gain) or high contrast grey (0.9 gain). My review sample was sent in Dragonfly's high contrast material, as I wanted to test it against another high contrast screen I had on hand -SI Screen's Reference II Motorized screen in their Lunar HD .85 gain surface. With prices starting at $2,699 the SI Screen is noticeably more expensive than the Dragonfly, which retails for $2,399 in its 100-inch form. So what does your money get you with Dragonfly? A lot.

Out of the box, the Dragonfly screen appears to be much like any other motorized drop down, what with its all-white casing and clean, smooth aluminum lines. However, closer inspection reveals a number of noticeable differences between it and much of the competition. For starters the Dragonfly screen has a small dark window on the front of its casing, which hides the screen's built-in IR sensor. Many projectors of the Dragonfly's ilk have IR control but they implement it via a dongle, which is often unsightly as is the case with those found on many of Elite Screen's motorized offerings. The Dragonfly offers an IR dongle too but its nice to see that if you don't need it you don't have to use it for IR control is also built-in. Speaking of control the Dragonfly has a number of control options besides IR starting with RS-232. Along with RS-232 the Dragonfly also has, as standard, a 12-Volt trigger. Of course all of these control options are backed up with the necessary equipment and/or cables to make them functional whether that be a 30-foot 12V cable, separate IR receiver, IR remote control or wall mounted keypad the Dragonfly has you covered.

Then there are the Dragonfly's mounting brackets, which coincidentally are the same as those found on my SI Screen and are what I consider to be the best in the business for they work for both wall and ceiling mounting and provide you with some control on leveling your screen should your ceiling be less than perfectly horizontal. Other noticeable features include adjustable tab tensioning (very nice) as well as an ultra quiet motor mechanism that is both quiet, or quieter, and quick -with an average drop time of 13 seconds.

Installing the Dragonfly screen is simple and straightforward and easy enough that any two people could tackle it DIY style in under an hour. The casing itself measures 107-inches wide by nearly five inches tall and four and three quarter inches deep in its 100-inch form. Its weight of 46.2 pounds is easily hoisted onto the included brackets whether they be affixed to your wall or ceiling. I mounted my review sample to the ceiling directly in front of my SI Screen for a direct comparison.

In terms of operation the Dragonfly couldn't be simpler or smoother. The included IR remote performs flawlessly though it's not as omni-directional as my Vutec's RF remote, but it works. The Dragonfly's motor is quieter than all of the other screens I had on hand and its speed was second only to the SI Screen when being asked to travel the same distance. The Dragonfly's tab tensioning system kept the screen surface smooth and wrinkle free and its ability to be adjusted was a nice touch for I found it was a tad too tight out of the box for my installation. As for the Dragonfly's high-contrast material it's brilliant and every bit as good (if not a touch better) as the costlier SI Lunar HD material in a head-to-head comparison.

My reference Anthem/JVC D-ILA doesn't really suffer from poor black levels or low light output but it was still clear to see where the negative gain screen was able to give a boost to its performance. Blacks were inky smooth with excellent contrast throughout and while the material may be grey in color, whites were still fairly brilliant, though not quite as poppy as my 1.3 gain Vutec. Colors were rich and nicely saturated giving the entire presentation, regardless of source material, a very cinematic quality that mimics the type of presentation you'll find in movie houses employing silver or grey screens. Ideally, a screen like the Dragonfly high contrast screen is one you would use with a DLP based projector but because of its ambient light performance it's not out of the question to pair it with a LCD or D-ILA type projector as I did. Overall, if you like or are in the market for a negative gain screen, there's little not to like about the Dragonfly high contrast screen.

Read about the high points and low points of the Dragonfly screen on Page 2.

High Points
• The Dragonfly's build quality is exceptionally sturdy and well made and the number of control options as standard is something you don't often find in even costlier projection screens.
• The screen's motor and tab tensioning system are among the best I've seen at this price and even a few thousand more.
• The Dragonfly's mounting hardware is the best in the business and its installation procedure is easy enough for a pair of novices to tackle in a single afternoon.
• The high contrast screen material employed by the Dragonfly screen is on par in terms of surface makeup and performance to that of th
e costlier SI Screen I had on hand during the review, leaving me to believe that it would compete favorably with any negative gain material currently available in the marketplace.
• Many high contrast or negative gain screens suffer from shimmer or poor image uniformity, especially off axis, which is not the case with the Dragonfly high contrast material.
• If you have a projector with less than reference black levels or like to watch in a bit of ambient light than the Dragonfly high contrast screen is tailor made for you.

Low Points
• For those requiring more drop you may be out of luck for the Dragonfly's maximum drop is just under 18 inches. Out of the box the drop is set to 15.75, which doesn't leave much room for additional adjustments if you need the screen to go lower.
• The Dragonfly's plastic end caps are about the only thing anywhere on the screen that screams "budget", though once installed upon your ceiling or wall they're less apparent.
• The first few times you drop any projection screen, especially the Dragonfly, there is a faint odor that is present. Like new car smell only not as inviting the smell dissipates over time.

Competition and Comparison
Negative or high contrast screens are becoming very popular as we move from our dedicated theater pasts to media room futures. Comparable screens include those made by SI Screens though Stewart, Vutec, Da-Lite and Elite all offer similar products or screen materials. For the ultimate in high contrast performance there's dnp as well as Vutec's SilverStar material though this level of super premium performance comes at a steep price -a solid five figures as a kick off. For more on these projection screens as well as others like them please visit Home Theater Review's Projection Screen page.

Conclusion
I must admit I didn't have the highest of expectations when I agreed to review the latest offering from Dragonfly screens. Not sure why, but I just thought it was going to be another affordable option for those willing to sacrifice performance to save a buck -I was wrong. Not only is the Dragonfly screen affordable it performs at a level equal to and in many cases better than its competition.

While Dragonfly may not offer every type of material under the sun à la Stewart or Vutec, the three options they do offer, matte white, high contrast grey and acoustically transparent materials are all you really need. The Dragonfly Motorized Tab Tensioned High Contrast screen reviewed here is fantastic and at just under $2,400 retail for a 100-inch screen it's a great value too. You can easily spend more but after getting acquainted with the Dragonfly screen I'm not sure spending more would get you more.