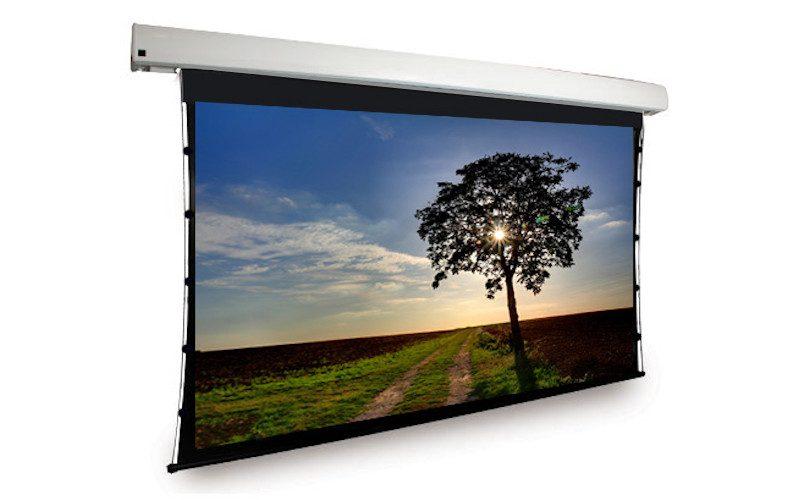 Dragonfly's 100-inch motorized tab tension screen with matte white material delivers a level of performance that is surprising, given the cost of the screen. Read on to find out more. 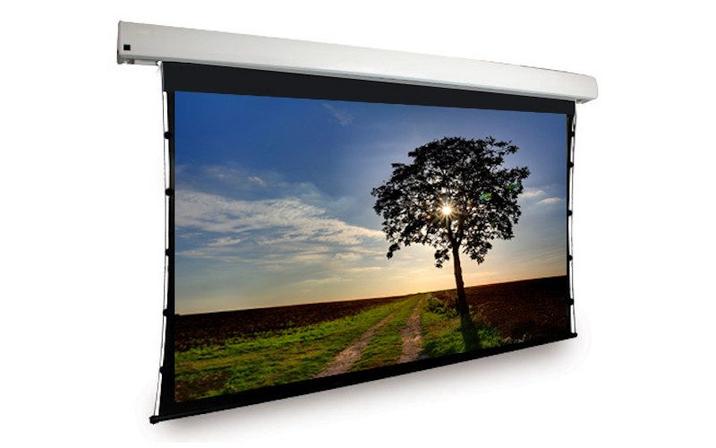 Some of you may or may not know this, but I have several projection screens set up in my reference home theater, among them a 100-inch Dragonfly motorized tab-tensioned high-contrast screen (.9 gain), which I reviewed back in December. So taken I was by the Dragonfly product that, upon the completion of my initial review, I promptly ordered another Dragonfly screen, this time with their Matte White surface, which carries a positive gain of 1.2. Both materials carry the same retail price in their 100-inch motorized tab-tensioned form, which is a reasonable $2,399.

So why the two screens?

Well, projection screens have as much to do with your projector's performance as your projector does, for some projectors do better with certain types or styles of screens. Case in point: the Optoma HD8300 DLP projector excels on a negative-gain screen whereas a D-ILA like my reference Anthem LTX-500 (JVC) or Sony's new VPL-VW1000ES 4K projector prefer a positive-gain screen. Since I often review both, it's best that I have two screens - one negative gain and the other positive. The 1.2 gain of the Dragonfly's Matte White screen material resembles what you'll find with other manufacturers, including Vutec, Da-Lite, Draper and even Stewart. I had a Vutec 1.3-gain screen on hand briefly and found the Dragonfly's 1.2-gain surface to be close, if not equal, to Vutec's 1.3-gain surface in terms of picture quality. I don't have a StudioTek 130 from Stewart for comparison but, suffice to say, the Dragonfly Matte White surface is capable of showcasing a brilliant and well-saturated image akin to what you'll get out of a 1.3-gain screen from some other vendors. While a positive-gain screen such as the Dragonfly may bode well for those who prefer poppy, well-saturated colors with strong blacks and solid edge fidelity, it's what Dragonfly includes in the purchase price that excites me.

Like its High Contrast counterpart, the Dragonfly Matte White screen is housed in white aluminum with matte white plastic ends. The included mounting brackets are topnotch and among the best in the business (for me, they're the reference standard), not only for mounting security, but also because they allow you to keep the screen level, even if your wall/ceiling isn't. The internal motor isn't as silent as some, but by no means is it the loudest, and it's fairly brisk in its operation. I also really like the screen's included IR capability, which is housed behind a small black porthole, rather than hanging freely via a dongle like so many other budget screen offerings. Also, the screen's tab-tensioning system is excellent, not to mention fully adjustable - another benefit not all tab tensioned screens grant you. Other standard features include RS-232 support, 12-volt triggers and the requisite cables and controls needed to take full advantage of such features, with an IR remote, 30-foot 12V cable, separate IR receiver and wall-mounted keypad.

Installing the Dragonfly screen, even at its 100-inch diagonal width, is a no-brainer and a project easily completed by two able-bodied people. My wife and I were able to have it up and running in around 30 minutes, which included mounting the brackets to the ceiling joists in my home. From there, getting both my High Contrast Dragonfly screen and newly acquired Matte White screen in line was easy and required only minor adjustments, thanks to the wonderful brackets. Like I said earlier, I found the Dragonfly's Matte White surface to be superior to that of my unity-gain (1.0) Elite and equal to that of Vutec's 1.3-gain surface. While my Elite screen retails for a little less than the Dragonfly, the Vutec costs much more, which speaks volumes about the Dragonfly's value.

Read about the high points and low points of Dragonfly's Matte White on Page 2.

High Points
Besides being a value-oriented screen, the Dragonfly Matte White surface competes favorably and in some instances bests costlier screens with even higher-gain surfaces.
The amount of "goodies" that Dragonfly includes as standard with the purchase of any of their motorized screens is enough to make any control freak happy, as well as make the competition blush.
The Dragonfly tab-tensioning system is rather ingenious and, because it can be adjusted, you're assured to always have a wrinkle-free presentation.
The mounting brackets that Dragonfly provides as standard with all of their motorized screens are the best in the business and ensure a safe and secure installation - trust me, it isn't pretty when projection screen mounts go bad.
For those with LCD, D-ILA or SXRD front projectors, Dragonfly's Matte White surface is going to be tailor-made for you and your projector.

Low Points
The standard drop allowed by all Dragonfly motorized projection screens is only 18 inches, which may or may not be enough for those with high ceilings.
As with most new screens, regardless of price, they seem to have a distinct odor, one that isn't altogether pleasant, and I'm afraid the Dragonfly screen has it. Leaving the screen down for a solid day or two will allow for the scent to dissipate faster; it's still there but, thankfully, it does go away with time.

Competition and Comparison
The Dragonfly Motorized Tab-Tensioned Screen competes quite favorably in terms of build quality and mechanics with screens costing much more, so it really comes down to the material, which in the case of the Matte White surface means you're going to be looking at screens with either a 1.2 to a 1.3 gain. A few examples include Stewart Filmscreen's StudioTek 130 and Vutec's BriteWhite screen surfaces.

For more on these screens and others like them, please visit Home Theater Review's Front Projection Screen page.

Conclusion
For under $2,400 retail, I'm still amazed by the performance the Dragonfly screens provide, especially when you consider that same $2,400 buys you a 100-inch screen, a motor with which to drop it, tab-tensioning to keep it flush and material in its Matte White finish that competes with the likes of Stewart and Vutec -and even manages to pass the 4K test from a distance of a few feet. Not bad.

Once again, you can obviously spend more, but unless you really know what you're looking for or need a screen that is truly specialized for one t
ype of application, the Dragonfly screens are solid all-rounders. Those of you with LCD-based projectors should take note of Dragonfly's Matte White material for it is stunning.