DVDO's AVLab TPG 4K test pattern generator is a great tool for the forward-looking calibrator who values convenience and portability. 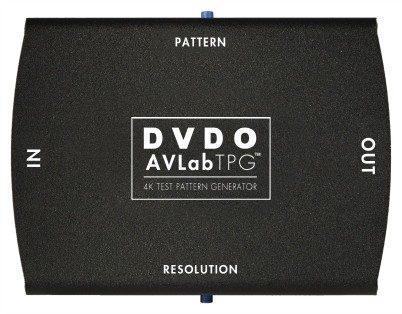 If DVDO had a slogan, it would probably be something like, “We don’t make display devices. We make them better.” From video switching to video processing to WirelessHD transmission, the company has a history of providing well-designed video-oriented solutions, for both the consumer and the installer alike. DVDO’s latest offering, the $1,299 AVLab TPG, may not have the consumer appeal of the Quick6 HDMI switcher or Air3 WirelessHD adapter, but it will certainly catch the eye of video calibrators and hardcore enthusiasts who just love to test stuff.

The TPG stands for test pattern generator, and that’s exactly what this product does. In fact, that’s all it does, generating 4K-friendly test patterns that assist with the setup and calibration of the new crop of 4K/Ultra HD display devices. The AVLab TPG is designed specifically to work with calibration software like SpectraCal CalMAN or ChromaPure; through its micro USB port and supplied USB cable, the AVLab TPG links directly to your computer and automatically controls the calibration workflow, pulling up the needed test pattern at the needed stage – which, as any experienced calibrator will tell you, is a far more preferable and reliable process than manually cuing up test patterns off a disc.

The AVLab TPG further includes an HDMI 2.0 input that allows you to pass through an HDMI video signal up to 4K/60 or an MHL signal up to 1080p/60, should you wish to access test patterns or demo content stored on other devices. I didn’t have another 4K/60 source to pass through, but the AVLab TPG did pass a 4K/24 signal from my Oppo BDP-103 player without issue. An IR receiver port is onboard, and there’s even an optical digital audio output to pass through audio from the connected source. I should stress, though, that the AVLab TPG does not include a scaler to upconvert the external source to 4K; it’s simply a pass-through device.

For the on-the-move installer/calibrator, the most appealing aspect of the AVLab TPG may be its form factor. This pocket-sized device measures about 2.5 x 3.5 x 0.75 inches, weighs just two pounds, and can be powered through the aforementioned USB connection. So, if a power outlet isn’t conveniently located during a calibration, you can power the AVLab TPG directly from your computer or some TVs’ USB ports. I took a photo (see above) of the AVLab TPG sitting beside the DVDO iScan Duo that I normally use during the calibration process, and I think you can easily appreciate the size difference. For the record, the iScan Duo does a lot more than just pass test patterns (it’s also a switcher, scaler, and advanced processor), but test-pattern generation is all I generally use it for – plus, the Duo requires a special RS-232-to-USB adapter cable to communicate with my laptop, as it lacks the direct USB control that the new AVLab TPG offers.

In addition to the unit’s portable size and USB power, DVDO has included other convenient features that show how much they understand the needs of installers. Two tiny buttons reside on the sides of the generator: one to manually scroll through the supported output resolutions and one to scroll through common test patterns. The physical resolution button is especially handy if, after setting the output resolution to 4K, you attach the generator to a 1080p TV and get no picture. I’ve already done this twice, and I suspect it will happen many, many more times in the near future. Instead of having to reconnect the TPG to a 4K device to change to a lower resolution, you can just hit the physical button to manually switch to a supported resolution.

One final hard button, to enter a firmware-update mode, is recessed on the side panel. Firmware updates are possible only via USB. The AVLAb TPG comes with a handy little carrying case, with “little” being the key word. The case will hold the AVLab TPG and the USB cable, maybe the power cord, but definitely not the remote.

The IR remote allows you to navigate the onscreen user menu, which is nothing flashy in terms of appearance but is very straightforward and easy to use. Through this interface, you can set output parameters like resolution, color space (RGB 0-255, RGB 16-235, YC444 16-235, and YC422 16-235), and bit depth (auto, 8, 10, or 12); you can enable HDMI pass-through; and you can check your firmware version. Most importantly, you can enter the Test Pattern menu to scroll the list of available patterns. The remote also includes direct access to some of the most commonly used patterns, as well as four “TPG Cycle” buttons that allow you to browse pattern categories and then look at specific patterns within each category.

For more on the AVLab TPG, including High and Low Points, Competition & Comparison, and Conclusion, go to page two. 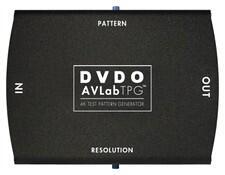 Now let’s talk about those patterns. There are over 100 patterns in all, the majority of which are grayscale and color patterns at different brightness levels, designed to aid in the calibration process. As I write this, 65 patterns are directly accessible via the onscreen menu, 55 can be scrolled through using the hard button on the TPG itself, and some are only accessible through the remote’s TPG Cycle buttons. DVDO continues to add patterns based on feedback from users, so those numbers will likely change. Of course, if you’re using the TPG in tandem with calibration software, the software will automatically cue up the correct patterns, based on the parameters you set. All of the patterns I use to perform a full calibration through the ISF workflow in CalMAN were available.

To connect the AVLab TPG to your computer in order to run calibration software, you need to load the supplied drivers, which come on a USB flash drive along with the owner’s manual. When I originally received my review sample, those supplied drivers were unsigned drivers, which requires Windows 8/8.1 users like myself to disable the signed driver requirement on the computer in order to load them. Just as I completed the review, DVDO introduced signed drivers, so this is no longer an issue. Once the drivers were installed, my Windows 8 Lenovo laptop had no issue communicating with the AVLab TPG and recognizing it within the CalMAN software.

I ran through the ISF calibration workflow with the new generator in place, and the AVLab TPG’s speed and responsiveness were excellent. You can set the pattern window size at 2%, 5%, 10%, 18%, 25%, 50%, 100%, just as you can with the iScan Duo. To set dynamic range, the AVLab TPG offers a combined brightness/contrast pattern, as well as new ISF black and white PLUGE patterns that allow for more precise adjustment. DVDO released a firmware update (v01.02) right near the completion of my review that added more patterns and introduced a new set of serial commands designed to speed up the workflow and provide even more accuracy for pattern generation.

Since this is a 4K test pattern generator, it stands to reason that there are some valuable 4K patterns – most notably, 1-Pixel Checkerboard, 1-Pixel Vertical Line, and 1-Pixel Horizontal Line patterns that confirm whether or not a display is showing the full 4K resolution. Samsung’s UN65HU8550 showed all three of these patterns correctly, while (not surprisingly) JVC’s DLA-X500R e-ehift3 projector did not, since the e-shift3 technology does not produce a true 4K resolution.

High Points
• The AVLab TPG can output test patterns at up to a 4K/60 resolution and automatically control calibration software like CalMANS via USB.
• The unit includes over 100 test patterns, including helpful 4K resolution patterns.
• DVDO is good about listening to users and consistently updating firmware to add helpful tools.
• You can connect the AVLab TPG directly to the TV (without a computer and software program) to perform basic adjustments.
• The unit is small and light, and it can be powered via USB.
• The remote control includes buttons to directly access a number of important patterns.

Low Points
• Power was not reliable through the USB cable that came with my review sample. A wiggle of the cable often caused the device to lose power. When I tried a different USB cable, I got a perfectly steady power supply.
• A minor quibble, but the remote’s Exit button doesn’t take you completely out of the onscreen menu system; rather, it moves you back through layers. So, there’s no one-button way to make the interface disappear.
• The remote control lacks backlighting.
• The supplied carrying pouch is too small to hold the remote.

Competition and Comparison
There’s not much in the way of 4K pattern generators at this early stage in the 4K game, and none that rival the DVDO’s $1,299 asking price. Quantum Data’s portable, battery-powered 780 Series 4K generator costs $3,500, while the newer, larger, rack-mountable 804A costs $5,995. The AVFoundry VideoForge 4K that SpectraCal promotes through its website carries an asking price of $4,995.

Conclusion
A 4K test pattern generator may not be an essential tool of the trade for calibrators just yet. The question is, do you want to be ahead of the curve or behind it? Higher-end clients – the ones who are more likely to invest in professional video calibration – are also the ones more likely to spend more on an Ultra HD TV right now. If you want to be certain that you’re setting up their new TV as accurately as possible, factoring in any potential nuances regarding 4K content, then the AVLab TPG is a valuable tool that, while not cheap, is much less expensive than the other options that are currently available. And hey, 4K aside, if you’re just looking for a smaller, more portable, more responsive pattern generator with lots of patterns and convenient features, that’s another reason to give the AVLab TPG a serious look.

New Workouts for Your Roku Streamer