A lot of times people think they can buy a great TV at a lower price by staying away from the bigger brands. Sometimes that is true. But in the experience of our reviewer, the Dynex DX-46L260A12 LCD HDTV is now one of those televisions. 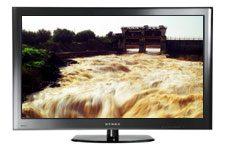 In the spirit of Westinghouse, Rocketfish, Element and others - Dynex is yet another manufacturer to hit big box stores such as Best Buy in hopes of attracting budget conscious consumers away from more established brands like Samsung and Sony. Dynex makes everything from cables to computers; however it was their HDTV lineup that caught my attention, specifically their 46-inch LCD HDTV (DX-46L260A12), which retails for $499.99 and is sold exclusively through Best Buy.

The DX-46 is a straightforward design with industrial design befitting a first generation HDTV. The DX-46 measures 44 inches wide by 27 inches tall (without table stand) and 5 inches deep. The DX-46 tips the scales at 50 pounds making it a heavyweight among similarly sized LCD HDTVs. The DX-46 is a full HD 1080p design with a reported contrast ratio of 2,000:1 and a refresh rate of 60Hz. The DX-46 is not 3D compatible nor does it have the ability to connect to the Internet - so those of you addicted to tweeting while watching Doctor Who (BBC) are going to be out of luck. As for the connection options it does have, the DX-46 has two HDMI, one composite, one component, one PC with 3.5mm audio jack and one RF input - all of which are, surprisingly, side mounted. Outputs include a single digital audio output as well as a headphone jack - again, both side mounted. Other notable features include two 10-Watt internal speakers and an Energy Star certification as the DX-46 draws less than one Watt in standby.

In terms of performance, I'm afraid there isn't much to report here before and/or after calibration, for the DX-46 image quality is below average. Right off the bat the DX-46's image is simplistic at best. What I mean by that is there is zero subtlety to the image in terms of its color fidelity, grey scale tracking, black level detail and beyond. It's as if the DX-46 has only a 12-crayon box to play with, whereas the competition has a box of 96 - and a sharpener. To make matters worse there is a noticeable red shift throughout, which further compromises the image. The image is noisy and artifacts, especially motion artifacts, are abundant. About the only redeeming quality the DX-46 has going for it is the fact that it's among the most basic, straightforward and easy to use HDTVs I've ever encountered. High Points
• The DX-46 is cheap and it's easy to setup and use, provided your expectations and demands are low.
• The side mounted jacks make hooking up gaming consoles such as the PS3 a breeze, which leads me to believe the DX-46 was perhaps designed with college students and/or teens in mind.

Low Points
• The DX-46's lack of inputs is simply unacceptable even at its so-called affordable price tag.
• The DX-46's build quality looks chintzy and feels cheap, leading me to question its longevity.
• The DX-46's image quality is below average at best and clearly not aimed at anyone who fancies himself or herself an enthusiast.

Competition and Comparison
You'd think that because of its $499 asking price, the DX-46 would be somewhat in a league of its own but that simply isn't true, for a quick search on Best Buy's website, a site were the DX-46 is sold, revealed 11 comparable HDTVs - comparable in size and price. Truth be told, the affordable HDTV market is hotter than ever and I can say without a shadow of a doubt that most every $500 HDTV I've encountered is better than the Dynex DX-46. Furthermore, if you're willing to spend just a little more you can purchase HDTVs such as Vizio's 46-inch Theater 3D HDTV, which will give you 3D capabilities, not to mention Internet connectivity, all for a retail price of $899. Obviously, street prices tend to be lower if you catch my drift. If 3D isn't your thing and you don't believe that the Internet should be surfed on your HDTV, then there's Phillips' 46-inch 7000 LED Series HDTV, which retails for $649.99.

For more on HDTVs including the latest news and reviews please check out Home Theater Review's HDTV page or our sister site HDTV etc.

Conclusion
I know it may sound and even look tempting, a 46-inch HDTV for less than $500, but trust me when I tell you that the DX-46 from Dynex simply isn't worth it. You're better off spending just a little more and getting a better budget HDTV from the likes of Vizio than wasting your money on what isn't a deal at all in the DX-46.