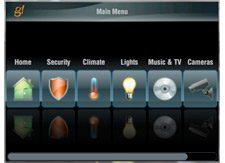 ELAN is also introducing the new g! Reference Guide, a comprehensive collection of tips and explanations split into two sections. Section one includes tips and explanations for common applications including backing up a system, developing customized controls, running g! Connect on a Mac, setting up end-user manager lighting scenes, the new Configurator functions for multiple displays and home bars, and many more. The second section provides a field-by-field description in the 5.4 Configurator.

The g! Version 5.4 software adds a significant number of features to the iPod Touch and iPhone g! apps and gives the iPad g! app identical functionality to the TS10 in-wall touch screen for security, climate, lighting and entertainment. The new software also allows for all supported systems to display in widescreen landscape mode and gives users the ability to remotely view recorded surveillance video with an enhanced DVR viewing feature on both the iPad and iPhone.

At the end of March, even more functionality will be added to the g! 5.4 software. A new g! Tools will consolidate many of the tools used to help dealers install and support systems including transferring files, managing firmware updates, keeping support documents organized and up-to-date, and a dashboard for managing multiple systems. They will also release the irrigation and messaging apps for g!Mobile.

The ELAN g! Entertainment & Control System provides a standardized interface that works across platforms, so that the g!Mobile app appears and works similarly on ELAN touchscreens, valets, and handheld remotes as well as users' televisions and mobile devices.