The most widely used physical media for music is still the Red Book CD. Electrocompaniet has made a new CD player, the EMC-1UP, that acknowledges this and attempts to elevate that media to new heights. But does it succeed? 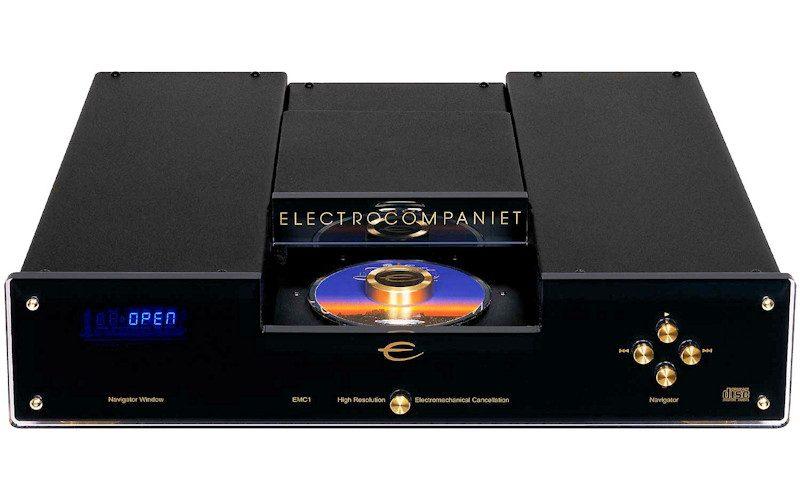 For any high-end company to keep the same reference piece in production for more than a few years is rare. Yet, Electrocompaniet has been manufacturing the EMC-1UP CD player for over ten years. This Red Book CD player was revised from the original EMC-1 to the EMC-1UP when 24-bit / 192 KHz up-sampling technology was implemented in 2001. The price of this player is $7,295, but is it is worth the high price of admission in today's throwaway component market?

The EMC-1UP is a top-loading player that uses the latest version of the Phillips CD Pro Top-Loading Drive unit. It is visually quite attractive looking with its acrylic front and gold and black scheme. The EMC-1UP can be controlled with its front panel buttons or with its dedicated remote control. It has the size, with a width of 19 inches, a depth 17.3 inches and a height of four and a half inches with a weight 44 pounds, to possibly pass as a power amplifier -yet we're talking about a CD player. The EMC-1UP has both XLR and single ended outs, along with a single ended out for its transport.

The build quality is superlative inside and out. There are two special aspects that are applied to the EMC-1 approach to getting the most sonically out of the red book format. First, Electrocompaniet has developed a proprietary "mechanical filter" that dramatically reduces internal and external vibration from entering the laser pick-up. Secondly, the EMC-1UP features this company's latest, fully balanced symmetrical circuit design powered by a Floating Transformer Technology power supply.

If you are looking for a CD player that gives you powerful dynamics, micro-details, resolution, and a great large and layered soundstage, the EMC-1UP might be just what you are looking for. What I find quite special, without a tube in sight, is how the EMC-1UP offers the timbres, warmth, and palpability of an analog front end without giving up any of the above stated sonic virtues. To use very subjective terms - this player is one of the most "musical" and "natural" CD players I have ever heard.

Read about the high points and low points of the EMC-1UP CD player on Page 2. High Points
• Superlative is the only word I can use to describe the EMC-1UP's build quality both internally and externally. It's pure audio jewelry.
• The EMC-1UP can be used either in either balanced or unbalanced mode, which is very nice these days.
• The EMC-1UP can be used as a reference level transport with other DACs or on its own, making it a versatile high-end source component.
• The EMC-1UP offers up the resolution of digital with analog-like timbres and warmth.

Low Points
• The EMC-1UP has no USB input so it cannot be used as a DAC for other digital sources or your computer.
• The EMC-1UP is a strictly Red Book CD player meaning it wont' play SACDs or any of the other high-resolution formats. Lesser priced players like Oppo Digital's BDP-95 play all disc formats (outside of HD DVD) including Blu-ray, SACD, DVD-Audio and more, including high end DACs internally for less money.
• Since the EMC-1UP is a top-loading CD player it must be given plenty of clearance within your rack to facilitate such a loading procedure. I placed mine on the top shelf of my rack to skirt any issues.
• The EMC-1UP's remote is quite functional; however it is made of plastic and far below the build quality of the player.

Competition and Comparison
Based on price and performance, the major competitors at this high level of CD players would be either the Marantz UD9004 ($5,999) or the Esoteric X-05 ($6,500). Both these players offer excellent build quality and top-notch sonic performance. Both of these players have one option that the EMC-1UP does not offer - they both play SACDs along with Red Book CDs. If your music collection, like mine, is composed of only Red Book CD's then I would still pick the EMC-1UP for its sonic performance on this format. However, if you have a large collection of SACDs along with Red Book CDs you might want to audition one of these other terrific players.

Conclusion
I have, over the last five years, auditioned over ten CD players, along with many highly regarded DACs, and still find the Electrocompaniet EMC-1UP ($7,295.00) to be one of the most "musical" and enjoyable CD players currently on the market. It offers top-notch build quality and some very interesting technological innovations. Most importantly, it offers natural beautiful timbres that are free from any digital artifacts. While there is no "BEST" in high-end audio because of personal taste and system synergy, the EMC-1UP is a terrific CD player, and I hope you get to hear it sometime in the future.

You'll automatically be entered in the HTR Sweepstakes, and get the hottest audio deals directly in your inbox.
Author
Terry London
HomeTheaterReview Product Rating
Value:
Performance:
Overall Rating:
When you buy through links on our site, we may earn an affiliate commission. Your support is greatly appreciated!
This is the static ad content. This is just a placeholder for now to get things styled.
Visit Website