When it comes to affordable projection screens no one does it better than Elite Screens and their ezFrame series is their least expensive product offering yet. Thankfully, this screen is sold direct and can accommodate entry level projectors to higher end models. 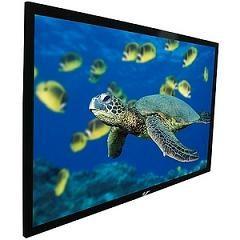 When I initially got into front projection, my first screen was from a little-known company called Elite. Why did I choose to buy Elite way back in the day, fresh out of college? Simply put, it was cost. After weeks of research, prior to buying my meager entry-level Epson projector, Elite was the only company that made a 120-inch electric screen for under $500, which, when you think about it, is somewhat astonishing. The truth is, everything Elite makes is super-affordable and geared towards the newly-initiated, though they offer many products now aimed at higher-end customers. The ezFrame screen reviewed here can go both ways.

The ezFrame fixed screen is a fully tensioned, non-motorized screen that hangs on your wall much in the same way a large picture or mirror would. It features a velvet aluminum frame that keeps the screen surface permanently tensioned for a wrinkle-free picture. The screen is available in both 4:3 and 16:9 configurations and can be ordered in a variety of materials, including a perforated acoustic finish that will allow you to place your speakers behind the screen itself for a stealth installation. Best of all, it is truly affordable in ways other manufacturers can only dream of making their products.

Read Page 2 for The High Points, Low Points and Conclusion

High Points
• The Elite ezFrame, as its name implies, is truly easy to assemble and install and, depending on the size of the screen, can be done by a DIY-er in a matter of a few minutes.
• Standard black backing on all screen material keeps light leakage to a minimum with the ezFrame screen.• At this price point and with the help of various screen materials, the ezFrame is picture-perfect for the videophile on a budget. In fact, you'd have to spend three times as much on a fixed screen for the difference to be remotely noticeable.

Low Points
• Other manufacturers are offering other finishes, including wood veneers for their aluminum frames, making them more décor-friendly than the ezFrame. However, Elite's choice not to offer such finishes is undoubtedly the reason the cost is able to be so low.

Conclusion
For a fraction of what the other guys charge, Elite wades into battle with their most universal and cost-effective solution with their ezFrame permanently tensioned screen. While not as feature-laden as some, nor available in a huge variety of screen materials, the ezFrame covers the right bases for most users and does so at the right price. If I were purchasing a screen for movie night enjoyment, I'd look to Elite and their ezFrame series of screens before deciding if the added cost of buying the competition was truly worth it.