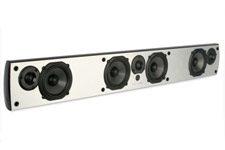 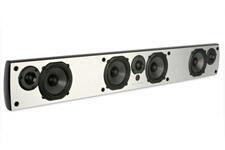 I recently reviewed the Episode 300 Series 40-inch soundbar and came away impressed. In fact, I made it a personal reference, as I found it to be a near-ideal blend of performance and affordability. The 40-inch soundbar from Episode retails for $599.95. This may be a bit too rich for some, which I completely understand. To see if their smaller, more affordable 30-inch model was up to snuff, I pitted the two against each other.

The 30-inch soundbar retails for $499.95 and looks identical to its larger, 40-inch sibling, minus its length. It actually rests at 32 inches, which makes the 30-inch soundbar ideal for smaller HDTVs ranging in size from 32 to perhaps 42 inches. This is great for me because my bedroom HDTV is a 42-inch model. The 30-inch soundbar, like its 40-inch brethren, is essentially three discrete loudspeakers in one slender chassis. The 30-inch Episode soundbar features four three-inch bass/midrange drivers, one for each of the left and right channels and two for the center channel. There are three three-quarter-inch silk dome tweeters also present, one for each channel. The 30-inch soundbar has a reported frequency response of 115Hz to 22kHz, meaning a subwoofer will be mandatory for full-range music and/or movie enjoyment. The 30-inch soundbar has a nominal impedance of eight ohms, with a sensitivity rating of 87dB, making it ideal for virtually every AV receiver currently available on the market today. Since the 30-inch soundbar is an entirely passive affair, you’ll be able to connect it to the AV receiver of your choice via its three gold-plated push terminals, which are centrally located on the speaker’s rear.

I connected the 30-inch soundbar to my bedroom Onkyo receiver via the same 16-gauge generic speaker wire that I used with the 40-inch model. I set the crossover inside the Onkyo and leveled all four speakers (soundbar and subwoofer) using my Radio Shack SPL meter. I also experimented with the Onkyo’s included Audyssey EQ software with excellent results. Despite being nearly ten inches narrower and less a few bass drivers, the 30-inch soundbar didn’t disappoint. In fact, minus a slightly higher crossover point for the Episode Cub Subwoofer I used for the review, the two soundbars were virtually indistinguishable from each other at reasonable volumes. At higher volumes, the 30-inch couldn’t quite keep up with its larger brother, sounding a bit thin and compressed in comparison. However, like the 40-inch, the 30-inch didn’t discriminate based on source material. Whether you like action films or romantic comedies, the 30-inch soundbar should serve you well.

While there was a clear coherence to the soundbar’s sound, I was impressed at its ability to sound like three discrete speakers despite its narrower width. This was most evident with my demo of Top Gun on Blu-ray disc, specifically the scene where Tom Cruise’s F-14 slowly crawls from left to right of screen. Dialogue was always crisp and intelligible, with a good sense of presence, though some actors lacked the same weight they possessed via the 40-inch model. The 30-inch’s silk dome tweeters were capable performers, with good high-frequency energy and sparkle, without sounding forward or becoming fatiguing at volume. At higher volumes, the tweeters do roll off a bit, which is a good thing, for many speakers and soundbars in the 30’s price bracket can sound nasty up top when pushed. Dynamically, the 30-inch soundbar isn’t quite as explosive as its 40-inch counterpart, but at the same time, I have to imagine it will be installed in rooms more conducive to its smaller stature, which should help overcome this minor deficiency.

Read about the high points and low points of the Episode 300 series soundbar on Page 2.

High Points
• The 30-inch soundbar is built to the same
exacting standards as the costlier 40-inch model, but it will run you
less without giving up much in terms of its performance.
• The
30-inch soundbar can be mounted either on a table, with adjustable tilt,
or to the wall below your HDTV using the included hardware.
• Those with smaller rooms and/or HDTVs will be well suited by the 30-inch soundbar.
•
The 30-inch soundbar’s sound is a touch lean of neutral, though when
properly mated with a subwoofer, its signature sound can fill out a bit,
bringing it closer to neutral overall.
• Despite being housed in a
single chassis, the 30-inch soundbar does an admirable job of sounding
like three discrete loudspeakers, complete with a surprising soundstage
and extension beyond its physical cabinet.
• Because of its passive
nature, the 30-inch soundbar doesn’t have to make do with faux surround
sound modes and instead can take full advantage of today’s modern
uncompressed surround sound codecs, such as Dolby TrueHD and DTS-HD
Master Audio.

Low Points
• Because the 30-inch soundbar is
going to rely just a bit more on a capable subwoofer in order
to flesh out its sound, careful integration is required in order for it
to sound its best. Having to rely on a subwoofer also does add a bit to
the 30’s overall cost of ownership.
• Those with larger rooms or a
propensity for louder volumes may find the 30-inch lacking when the
going gets tough, compared to the capacity of its larger, 40-inch
sibling.

Competition and Comparisons
The soundbar category is
hotter than ever and seemingly everyone offers a product near or at the
30’s price. Among my personal favorites that deserve to be mentioned in
the conversation are ZVOX’s Z-Base 580 at $599.99, Vizio’s
VSB-210WS at $299 and Polk Audio’s SurroundBar 6000 at $499.95. All three have their unique strengths and weaknesses compared to the
30-inch soundbar from Episode but, like the 30-inch, all are well
suited for smaller rooms and/or HDTVs roughly 42 inches in diagonal
length.

For more on these soundbars and others like them, please
visit Home Theater Review’s Soundbar page.

Conclusion
At
a hair under $500 retail, the 30-inch soundbar from Episode Speakers
isn’t the most affordable passive soundbar solution currently available,
but it’s far from the most expensive. Still, if you have a smaller
bedroom or den system built around HDTVs roughly 32 to 42 inches
diagonal, you’ll be well served by Episode’s new compact soundbar,
though you’ll want to be sure to bring a subwoofer to the party for
true, full-range sound, not to mention spirited playback. Even so, for
roughly $500, the combination of the 32-inch and a modest sub should
make for a wonderful-sounding compact home theater speaker system.