The soundbar market is definitely a crowded space. However, given the quality of performance that the Episode 300 Series ES-300-SNDBAR-40-BLK delivered during Andrew Robinson's review, it should have no problem rising to the top.

I have a love-hate relationship with soundbars. On one hand, I see their value and importance, but on the other, my audiophile self despises their lack of commitment to the cause. I’ve spent quite a bit of time with a number of soundbars recently and, while I’ve come away from each encounter with a newfound appreciation for the simple multi-channel speaker, I’ve yet to find one that manages to be equally pleasing for both music and movies. I take that back, I’ve yet to find an affordable soundbar that does it for me on both fronts – until now.

Episode Loudspeakers is a newer player in the space, offering everything from subwoofers to outdoor loudspeakers. Their latest offerings are two new soundbars in what Episode calls their 300 Series. The larger of the two, the ES-300-SNDBAR-40-BLK (ES-300-40) reviewed here, retails for $599.95. If $600 is a bit steep, the smaller soundbar in the 300 Series retails for $499.95.

The ES-300-40 is essentially an LCR in a single slender chassis. Encased in the gloss-black chassis are four three-inch bass/midrange drivers complimented by four three-inch passive radiators. High frequencies are handled via three three-quarter-inch silk dome tweeters. The drivers are spaced symmetrically across the ES-300-40’s entire 40-inch width. As for its other dimensions, the ES-300-40 is four-and-a-half inches tall by nearly three inches deep and tips the scales at a respectable 11 pounds. Because the ES-300-40 is essentially three discrete loudspeakers in a single chassis, there are three sets of gold-plated pushpin binding posts to connect the ES-300-40 to your amplifier or AV receiver. This means, of course, that there is no built-in or internal amplifier or sound processor of any kind, which is a good thing in my opinion, for it usually means the manufacturer was focused on getting one thing right – the speakers themselves.

As for the speakers, they have a reported frequency response of 105Hz to 22kHz, so not exactly a bass head’s dream, but then again, few soundbars are. The ES-300-40 has a sensitivity rating of 88dB, making it ideal for a wide range of electronics and amplifiers. Episode lists the ES-300-40 recommended power requirement at around 90 watts RMS, though it can handle up to 225 watts in short bursts. Needless to say, those of you with AV receivers or mid-fi separates will be just fine.

Integrating the ES-300-40 into my bedroom system was a breeze. I connected it to my Onkyo AV receiver via three separate runs of bare 16-gauge speaker cable. I augmented the ES-300-40’s lower frequencies with another Episode speaker, their newest compact subwoofer, the CUB8. Episode does make suitable rear-channel speakers, but since this was to be a review of the ES-300-40 itself, I chose to run my bedroom home theater sans rear channels for the duration of this review. Out of the box, the ES-300-40 is a performer, possessing excellent coherence across all three of its channels and surprising separation in two-channel listening. Believe it or not, there was actually a soundstage present when playing back two-channel source material, one that had solid depth and width, which exceeded the physical dimensions of the ES-300-40 itself. The ES-300-40’s overall sonic character was ever so slightly lean of neutral, though it was more apparent during two-channel demos than in multi-channel ones.

For movies, the ES-300-40 simply excited the senses and showcased what is possible in a soundbar when the attention is placed on the loudspeakers themselves versus trying to figure out an all-in-one solution. What I mean by this is, the ES-300-40 sounds larger and more refined that either its physical size or makeup would lead you to believe. Vocals are clear and crisp with real presence and authority. Bombastic sound effects and dynamic beats are rendered faithfully and at levels you’d swear weren’t possible from a soundbar – hell, I’ve heard budget and mid-fi bookshelf speakers that couldn’t hold a candle to much of what I heard from the ES-300-40. True, the ES-300-40 does require a subwoofer to pull off the illusion of three full-range loudspeakers but, given the ES-300-40’s asking price and that of the CUB8 subwoofer I used for this demo, the two made for one heck of a compelling combo and did so for under $1,000 retail.

Read about the high points and low points of the ES-300-40 soundbar on Page 2. 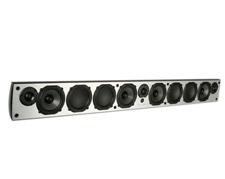 High Points
• The ES-300-40’s build quality is excellent, as
the whole speaker exudes class, making it feel far more high-end than
much of the competition. While I’m certain few will leave the grille
off, the ES-300-40’s drivers are quite striking to look at.
• The
ES-300-40 is actually three discrete loudspeakers in a single chassis,
meaning you’ll need to bring your own amplification and surround sound
processing to the party, either in the form of an AV receiver or
separates. This is a good thing, because it means the ES-300-40 can play
with actual, uncompressed surround sound formats, such as Dolby TrueHD
and DTS-HD Master Audio, as opposed to simulating them via some trick
DSP.
• The ES-300-40 performs surprisingly well as a two-channel
speaker, meaning it can pull double duty in a simple stereo and home
theater rig.

Low Points
• For those looking for an all in one
solution, you’re not going to find it here with the ES-300-40, for it
requires either an AV receiver or separates in order to dance.
• For
full-range performance, you’ll have to mate the ES-300-40 to a
subwoofer, which does add a little to the bottom line, but then again,
for the most part, all soundbars have the same requirements.
• Those
of you with larger HDTVs may find the ES-300-40’s 40-inch width a bit
short and visually off. Sadly, you’ll either have to make do or look
elsewhere, as the ES-300-40 is the largest soundbar Episode currently
makes.

Competition and Comparisons
The soundbar market is
hotter than ever, especially when it comes to those costing less than
$1,000. At or around the ES-300-40’s asking price, some other possible
suitors include ZVOX’s Z-Base 580, Fineline
Speakers FC-3 Ultra-Thin Soundbar and Polk Audio’s SurroundBar 6000. For more on soundbars, including the latest news and reviews, please
visit Home Theater Review’s Soundbar page.

Conclusion
Soundbars
are hotter than ever and, while my quest for perfection continues, I’m
content to call the new Episode ES-300-40 soundbar my new benchmark for
the breed, for its combination of price and performance is without equal
-at least in my travels. I love the ES-300-40’s look and build quality
and, while it may not be visually ideal for those rocking 50-plus-inch
HDTVs, it suits my 42-inch Samsung LCD just fine. The ES-300-40’s sound
quality is excellent, regardless of source material, and I find its lack
of onboard amplification and/or surround sound processing rather
refreshing, for it means I don’t have to lose out when enjoying a
Blu-ray disc in bed. Yes, the ES-300-40 needs a sub and, yes, it does
require you to purchase an AV receiver, but I don’t really care, for
most good soundbars at or near the ES-300-40’s price have similar
requirements. Therefore, I strongly urge anyone looking to acquire a
soundbar for the home to find the nearest SnapAV dealer and listen to
the ES-300-40 for yourself.