The Episode EA-DYN-8D-100 is a Class D amp with eight 100-watt channels that can be configured for all sorts of use. Priced at $1,200, this amp allows you to power up a lot of rooms for not all that much... 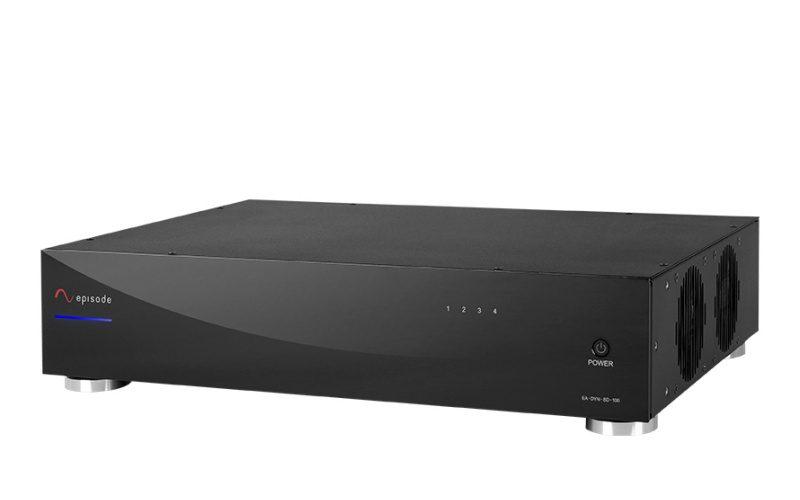 The Episode EA-DYN-8D-100 is a Class D amp with eight 100-watt channels that can be configured for all sorts of use. Priced at $1,200, this amp allows you to power up a lot of rooms for not all that much money considering. I have two distribution amps in use in my current system, including this Episode EA-DYN-8D-100, as well as the more expensive Anthem MDX-8, which is also an eight-channel amp but comes with Anthem's lauded ARC room correction. Episode makes their dynamic series Class D amps in two, eight, 12, and 16 channel versions based on the needs and size of your house.

If you've never heard of Episode, they are one of the many brands that SnapAV sells, which now includes Autonomic, Sunbrite TVs, Control4 home automation systems, and more. If you've never heard of SnapAV, that's OK, as they target the custom installation market and provide a place for integrators to buy all sorts of well-priced and slick components. The problem for the average consumer is that SnapAV publishes no prices without having a dealer login. With that said, if you are considering this amp, then you are likely working with an installer. Getting back to the Episode EA-DYN-8D-100, this eight-channel amp employs ICEpower modules, which allow for a really good amount of power without creating a lot of heat – a definite upside for rack-mounted installations. The amp can be controlled via 12-volt triggers, but also has the ability to auto-sense inputs, which saves power and further cuts down on heat.

You can configure different channels and zones to be used to play different sources at different levels, which is cool. You can daisy chain multiple Episode EA-DYN-8D-100 amps (or other versions of their amps) with their loop feature. You can bridge channels to double down on power if you have a situation that demands it. I never did, as I used most of these channels to power my Polk Atrium Garden Speaker System and a few in-wall and invisible speakers from the likes of Nakymatone or Stealth Acoustics.

Episode offers some pretty beefy surge protection on the Episode EA-DYN-8D-100, which is CE Level 3 standard rated. They report that they ESD tested the amp with as many as 15,000v and surge tested up to 2,400V. That's a good sign that this amp can stand up to some serious abuse. They back up their testing with a two-year warranty.

Listening
Speaking of serious abuse, that's my middle name when it comes to audio reviews, so let's get down to it. Most of my listening was done through a pair of Nakymatone Echt invisible in-ceiling speakers both with and without Gray Sound mounted in-ceiling subwoofers (review pending). This is my go-to distributed audio setup if I am not using Stealth Acoustics LRX-73 invisible in-walls, which I kinda love too. Pretty much, I don't want to look at in-wall or in-ceiling speakers anymore.


On "Hey Nineteen" (1440 AIFF) from the audiophile and Yacht Rock classic Gaucho by Steely Dan, I was able to get very good layering in the chorus. Remember, any yacht rock song worth its salt has Michael McDonald on it, and he needs to sound smooth, which in this case he does.

The outro of the song, with its layered vocals and some sort of non-guitar solo, sounds detailed where lesser amps might collapse a bit. The percussive pops of Walter Becker's guitar at the very end of the track have notable life, but are in no way harsh sounding.


Upping the stakes a little bit, I cued up a more modern track from Thievery Corporation. On "Decollage" (featuring Lou Lou Ghelichkhani) from the excellent Saudade album (1440 AIFF) you get to hear a spacious, modern mix with somewhat echoey female vocals dancing on top of a groovy musical bed, with tinkling piano melodies, subtle violins, and tasty little bits of percussion. The bassline is a bit more pronounced on this track than the above Steely Dan track, and the Episode EA-DYN-8D-100 kept up suitably. While it held the imaging and layering together nicely, it also provided plenty of horsepower needed to play this loungy gem at more than suitable levels without any sign of strain. Class D amps are good like that.


I listened to record producer Jimmy Iovine interviewed on Howard Stern a few months back, and he was talking about making David Bowie's "Fame" and how John Lennon sang the backup – a musical bit of trivia that somehow I never knew. I ended up sitting in the car for more than an hour listening to Mr. Iovine's rock and roll stories, which I was reminded of when I came upon "Fame 90," a remix of the very stylish track by Mr. Bowie.

The newer version is a little more jazzed up, with some more snappy sounding drums, which the Episode EA-DYN-8D-100 did a nice job on. Bowie's voice was well presented and the syncopated beats had the energy to catch your attention. That's not bad from a distribution amp. Not bad at all.

The $1,995 Anthem MDX-8 (review pending) is an amp that commands the extra price. Anthem's excellent ARC room correction gives it an edge that the Episode EA-DYN-8D-100 can't match, both in terms of features and performance. Sonically, the MDX-8 is a step up even before you add ARC to the equation. With ARC, you can get to a whole other place in terms of audio. The question is: does your system/setting demand such find tuning? If you are putting speakers in your third guest bedroom or powering some leftover speakers in your garage for background music, do you really need ARC room correction? I do, but I am an extremist. I can also say that Anthem's customer support and embracing of mainstream consumers is a whole different experience from the support I got from SnapAV.

Sonance is the pioneer in in-wall speakers, but they also should get credit for being out in front of the distribution amp game. They have a full line of DSP amps, one of which I used at my last house for what I am using the Episode EA-DYN-8D-100 for in my new place. The Episode is less expensive, and in many cases gets the job done just as well, but like the Anthem, there are definitely advantages to the DSP amps in the Sonance line if you are looking to go up-market.

Conclusion
Dollar for dollar, the Episode EA-DYN-8D-100 is a very good value for an eight-channel distribution amp. Sonically, it isn't the best amp that I've ever heard, but for the applications that I used most of the channels for (outdoor audio), it was a worthy place to cut costs. I splurged on the Anthem MDX-8 with Anthem Room Correction for my more critical rooms, and left the Episode EA-DYN-8D-100 to handle the less critical jobs to cost engineer my way through a pretty nifty indoor/outdoor audio system.

Depending on the demands of your room and the features you may need, the Episode EA-DYN-8D-100 is perfectly capable of getting the job done in many ways at a price that won't break the bank.

You'll automatically be entered in the HTR Sweepstakes, and get the hottest audio deals directly in your inbox.
Author
Jerry Del Colliano
HomeTheaterReview Product Rating
Value:
Performance:
Overall Rating:
When you buy through links on our site, we may earn an affiliate commission. Your support is greatly appreciated!