Episode has released their largest subwoofer to date with the ES-SUB-12. While its looks may not be so impressive, HomeTheaterReview.com reviewer Andrew Robinson's evaluation claims the performance is quite the opposite. 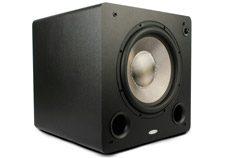 Episode loudspeakers is a relatively new brand that many outside of the custom installation world may not be all that familiar with. However, those in the know can be found singing the brand's praises, for Episode is yet another manufacturer that practically embodies the value for dollar concept. While Episode speakers may not be available for purchase direct to the consumer via the Internet, that doesn't mean their price points are that of a traditional retail brand. In fact, many of their products fall below what you'd expect to pay direct, yet their build quality and performance exceeds expectations. Case in point: the ES-SUB-12-300-MB (ES-SUB-12) reviewed here. At $649, it's the largest subwoofer Episode offers, which also makes it the most expensive, though its asking price is still within the range of its competition and in some cases lower. Still, price isn't everything, even in today's struggling economy, so imagine my surprise when I discovered that the ES-SUB-12 wasn't just an affordable subwoofer option -it was a great subwoofer option.

The ES-SUB-12 is very traditional in its appearance, in that it's a large matte-black cube that is reminiscent of subwoofers of old. There are no angled lines or automotive finishes here, which no doubt keeps the price low. However, it should be noted that Episode's decision to make the ES-SUB-12 rather plain-looking is not a cost saving measure, it's a functional one, for the ES-SUB-12 is designed to be housed in a custom cabinet and/or a wall cavity behind a fabric or perforated screen. If you're looking for a sub that fits more in a living room environment than in a custom installation, then you need to check out Episode's ES-SUB-12-300-BLK, which is the same subwoofer but with a more décor-friendly appearance. I chose to review the ES-SUB-12 for two reasons: one, I don't care about my subwoofer's appearance and, two, I have dogs and high-gloss anything doesn't really jibe with my household. Moving on, the ES-SUB-12 is rather large, measuring 17 inches high by 16.5 inches wide and 16.5 inches deep. The ES-SUB-12 is sturdy enough at 42 pounds, though not back-breaking, as are some other 12-inch ported subs.

The ES-SUB-12 features a single forward-firing 12-inch woven fiberglass driver with a two-inch diameter voice coil mated to a 300-watt BASH (Bridged Amplifier Switching Hybrid) amplifier. The ES-SUB-12 has a reported frequency response (plus or minus three dB) of 25Hz to 200Hz. Crossover frequencies fall within 40 -200Hz. In terms of connection options, you have RCA inputs as well as five-way binding posts or speaker level inputs, something that a lot of subwoofers lack nowadays, as many are connected to AV receivers and preamps via subwoofer or LFE outs. Those of you looking to add a subwoofer to a traditional two-channel set-up, especially those with preamps that lack subwoofer outputs, should take note. Controls include volume, which is located on the front of the subwoofer itself, crossover frequency, phase and power (on/off/auto). The last feature bestowed to the ES-SUB-12 is its warranty, which is two years on the BASH amplifier and ten years on everything else, including construction, materials, driver, etc. -not quite the lifetime warranty afforded to other Episode speakers, but still not bad.

Integrating the ES-SUB-12 into one's home theater system is easy and fine-tuning is even easier, thanks to its front-mounted volume controls, which rest under the detachable grille so as not to tempt curious hands (or noses, in my case). Dialed in, the ES-SUB-12's capabilities are surprising, possessing tremendous heft while still remaining composed and refined -especially when compared to other subs in its price bracket. As a home theater subwoofer, the ES-SUB-12 can more than hold its own against some of the biggest names in the business, including Paradigm, PSB, Velodyne, and others. The ES-SUB-12 even manages to hold its own against costlier competition, such as my reference JL Audio Fathom f110, giving up just a little in its delivery of subtle details, texture and extension, as well as dynamic snap. Does this mean the ES-SUB-12 is somehow veiled or sluggish? Not at all, it just manages to be better than average when compared to, say, my personal reference, JL Audio's Fathom f110 subwoofer, which I consider to be excellent.

Comparing the ES-SUB-12 sub to JL Audio's Fathom line is high praise, for I could easily live with it as a reference if I didn't have access or the funds to accommodate my JL subwoofers; it's that good. Furthermore, you can buy four, count 'em, four ES-SUB-12s for a little more than the price of one of my Fathom 110s. Four ES-SUB-12s would no doubt result in smoother bass response and ultimately trounce the performance benchmark set forth by the single JL subwoofer. So, pound for pound, the ES-SUB-12 is a better value and packs more performance per dollar into its $649 asking price than my reference JL Audio subwoofer does at $2,100.

Read about the high points and low points of the ES-SUB-12 on Page 2.

High Points
• The ES-SUB-12's build quality is phenomenal, possessing smooth lines, solid construction and the warranty to back it up. While the finish may not be automotive grade, it's not supposed to be, for the ES-SUB-12 is designed with the intention of being installed into custom cabinetry or behind a fabric wall or perforated screen.
• The ES-SUB-12 possesses all the necessary inputs and connection options to integrate it into a variety of setups, including more basic two-channel systems, thanks to its speaker level inputs or five-way binding posts.
• The ES-SUB-12's front-mounted volume controls make fine-tuning adjustments easy and straightforward, saving you time and headaches.
• The ES-SUB-12's performance is stellar, as it punches far above its weight class, embarrassing others in its price bracket and coming just short of performance benchmarks set by my costlier JL Audio Fathom f110 subwoofer.

Low Points
• The ES-SUB-12's grille is a bit finicky and cheap, but then again, you'd probably leave it off when installing it into an AV cabinet anyway.
• I'm
sure many will criticize the ES-SUB-12 for its simplicity, for many subs in its price bracket feature some sort of unique cabinet construction method, finish or control option, which the ES-SUB-12 does not have. However, I would argue that the competition spends funds on these so-called features that they aren't spending on their product's performance, which is a problem the ES-SUB-12 doesn't have.
• The ES-SUB-12 is a large subwoofer, meaning it's best suited for medium to large rooms. If you're not building it into a cabinet or dedicated theater space, then you will have to contend with its larger footprint.

Competition and Comparison
On Episode's own website, they list what they view as the competition for the ES-SUB-12. This competition includes Velodyne's DLS-4000R subwoofer, which retails for between $499 and $849, depending on the size of the driver. Another competitor to consider would be Polk's DSW Pro 600 at $679.95, as well as Paradigm's DSP-3200 at $749. I would also add GoldenEar's $699 ForceField 4 subwoofer, as well as Aperion Audio's Bravus II 10D at $799.

Of course, I did mention my own personal reference too, JL Audio's Fathom f110, which does outperform the ES-SUB-12, but not by the wide margin I feel many would expect. For more on these subwoofers and others like them, please visit Home Theater Review's Subwoofer page.

Conclusion
To say that I was impressed following my time spent with Episode's big daddy subwoofer, the ES-SUB-12, is a bit of an understatement. At first glance, there's little to get excited about, for the ES-SUB-12 appears to be behind the times in terms of finish and construction, but when you consider its designed purpose, to be installed into a cabinet or custom installation, its physical attributes and design become more acceptable. Then you power it up, at which point who cares about its physical appearance, for the ES-SUB-12 manages to pack so much performance into its simple cabinet and modest asking price that you can easily overlook any shortcomings it may have. Is it perfect? No, but it more than holds its own against its direct competitors from the likes of Velodyne, Paradigm and others, and even manages to give higher-end brands like JL Audio a run for their proverbial money. All things considered, the ES-SUB-12 is a true value and performance leader. Highly recommended.