I was recently introduced to Episode Speakers by Sean Killebrew, who reviewed the company's in-wall speakers and had good things to say about them. When I was asked if I wanted to dig up my backyard to run wires and...

I was recently introduced to Episode Speakers by Sean Killebrew, who reviewed the company’s in-wall speakers and had good things to say about them. When I was asked if I wanted to dig up my backyard to run wires and bury a large subwoofer, I was hesitant but, keeping Sean’s recommendation in mind, I went for it. Episode sent out one its preconfigured systems, the Landscape Speaker Kit, which includes four satellite speakers (model #ES-LS-SAT-6) and a 1,000-watt Crown amplifier with custom DSP settings (which retails on its own for $2,863), as well as the Burial 12-inch subwoofer (model # ES-LS-BSUB-12-CPR, which is available for $1,500).

The satellites look like large landscape lights that measure 7.1 inches in diameter and 10 inches long, with a threaded post that accepts a variety of mounting options. The speaker is a two-way design with a six-inch polypropylene woofer and 0.75-inch aluminum dome tweeter with a second-order crossover. The speakers can be configured for use with either 70-volt or eight-ohm amplification. The speaker’s rear cover screws off to access the volt-or-ohm setting, as well as adjustable volume in 70-volt mode to make it easier to balance the volume level among the speakers. 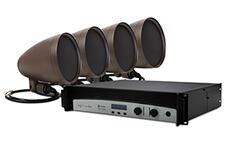 The subwoofer comes in two boxes and is immense. The enclosure itself is about the size of a keg of beer and contains an eight-ohm, 12-inch woofer that has a 2.5-inch, four-layer voice coil and an 80-ounce magnet in a ported enclosure. The subwoofer is not powered and needs external amplification (such as the amplifier that comes with the satellite kit mentioned above). The enclosure is designed to be buried with a mushroom-shaped cap at the end of its adjustable height port. The enclosure is made out of five-eighths-of-an-inch-thick HDPE and looks like it will hold up well to the weight of being buried. I buried the subwoofer in a landscaped area that does not get much foot traffic, but would not worry if it were somewhere where people walked around a lot.

The instructions supplied by Episode were easy to follow; the hardest part of the installation was digging the large hole for the subwoofer. Once that part was out of the way and the subwoofer and speakers were in place, I experimented with both 70-volt and eight-ohm configurations. A benefit of 70-volt systems is that many more speakers can be driven with longer speaker wires. The adjustable transformers in the Episode satellites allow for easy volume matching in 70-volt mode (but can be bypassed for eight-ohm operation). While the 70-volt setting provides a lot of installation flexibility, the speakers’ midrange presence is reduced. The amplifier’s equalization helped bring the 70-volt sound closer to that of the eight-ohm connection, but the midrange in eight-ohm mode was fuller and more dynamic, with better tonal balance.

Click on over to Page 2 for the Performance, the Downside, Competition and Comparison and Conclusion . . .

The difference between the eight-ohm and 70-volt settings was most easily discerned with vocals. Lorde’s “Royals” from the album Pure Heroine (CD, Motown / Universal) is something we’ve listened to a lot in the past few months. When played through the speakers in 70-volt mode, her voice sounded removed and thin in comparison with the eight-ohm mode.

With the subwoofer being driven by one channel and the satellites by the other, a mono signal is required. Episode provides a summing cable with female RCA connectors on one end and Phoenix-style connectors on the other side. I did not miss the stereo presentation for landscape applications and have used either mono or single-speaker stereo (both channels through one speaker) in my backyard for a while, as this provides good coverage for both channels. Using a mono signal, you are never going to get the soundstage or imaging of a two-channel system, and the level of refinement is not up to the standards of a good midpriced pair of stereo speakers, but I personally do not think that this is as important for an outdoor system that is meant to compliment a BBQ, swimming, or any other backyard activity.

Low Points
• Converting a stereo signal to mono using the channel-summing cable can lead to some phase anomalies. If your source component or preamplifier can provide a mono signal, use this feature to reduce these potential issues.

Conclusion
The Episode Landscape Speaker Kit and the companion subwoofer provide the basis of a system that can be scaled to cover just about any backyard with full-range sound. I liked that I was able to get real bass outside without any large, visible enclosures; this is something that has always been a challenge with landscape systems. The adjustable transformer settings on the satellites, when used in 70-volt mode, make volume balancing pretty simple, but I would recommend trying to first use positioning to achieve balance so that the speakers can be run in eight-ohm mode for improved midrange performance.

The Episode system did exactly what I want from a backyard speaker system: it provided even volume throughout the yard without blasting the neighbors, it served up a full-range sound with real bass, and it came in a form that was unobtrusive. We host lots of backyard gatherings, and the Episode speakers never let me down at any of them. Whether the music was at low background levels or cranked up higher, the Episode system delivered the goods.