While value oriented projectors are delivering better and better performance, that is not always the case. Andrew Robinson puts the Epson 5020UBe projector to the test to see what it is made of. 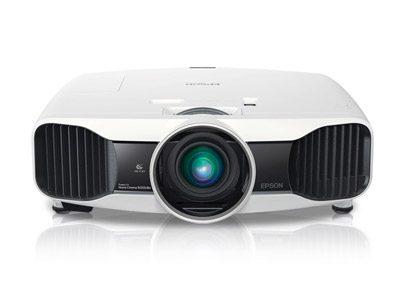 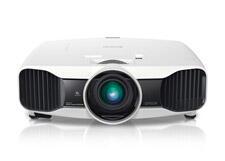 Epson is arguably the king of affordable LCD projectors, with products starting at around $1,000 retail and topping out at around $3,000, or $2,899 to be exact, as is the case with the 5020UBe reviewed here. The 5020UBe sits atop Epson’s line like a proud papa, boasting all the latest and greatest the venerable manufacturer has to offer in a pretty nifty package.

I received my review sample of the 5020UBe from Epson retailer VisualApex, which supplied not only this projector, but also several others for review; to say that Epson has a vast selection is somewhat an understatement. Back to the 5020UBe, it is a good-looking projector, clad in Epson white and accented in matte black. The entire chassis is plastic, though it feels sturdy enough. It measures 18.4 inches wide by 15.6 inches deep and six inches tall (with feet). The 5020UBe is also quite hefty at 19 pounds, though it is light enough to be compatible with a variety of universal projector mounts. The center-mounted lens accents the front of the 5020Ube, whereas the rear plays host to a variety of input options. Inputs include HDMI (2), component, composite, PC, RS-232 and Ethernet. Throw in a standard AC power receptacle and a single 12-volt trigger out, and you’ve got the 5020UBe’s input/output options all sewn up. It should be noted that the 5020UBe’s HDMI inputs are 3D-compliant, making the 5020UBe a 3D projector.

Behind the scenes, the 5020UBe boasts a native resolution of 1,920×1,080 or 1080p HD via its three LCD panels. It has a reported brightness of 2,400 ANSI lumens via its 230-watt UHE bulb, which is good for up to 5,000 hours in ECO lamp mode. Contrast is reported to be 320,000:1 (dynamic), with color coming in at 10-bit, though current HD content, broadcast or Blu-ray, is restricted to eight-bit, so the 10-bit color is upsampled. The 5020UBe boasts THX certification, meaning it possesses the requisite controls to carry out a full THX video calibration. This does not mean it comes calibrated out of the box. Since the 5020UBe is a 3D projector and Epson is one of the few more forward-thinking companies out there today, the projector comes with two pairs of active (RF) 3D glasses. Also included with purchase is Epson’s wireless HDMI transmitter, which allows you to send HD signals to the 5020UBe wirelessly, which may or may not help in certain situations and/or installations.

In terms of performance, and despite its flagship status, the 5020UBe suffered from similar ailments that I’ve noticed elsewhere in the Epson line, specifically in terms of panel alignment and color shift. Of the three Epson projectors I had on hand during this review, the 5020UBe was by far the worst offender in terms of its panel alignment issues. I was able to (largely) solve them, though even after careful adjustment, the 5020UBe’s alignment issues were not completely gone. Also, out of the box, the 5020UBe suffered from a noticeable red shift that was very visible in both test patterns and real world content. With proper grayscale calibration, I was able to correct this, but it is an out of the box and/or preset issue one must acknowledge. Speaking of calibration, despite having the requisite controls to perform a full THX-level calibration, the controls themselves don’t really work, or at least work as needed to achieve a proper natural-looking image. Using by-eye filters and familiar test patterns resulted in a far more lifelike image, despite having all the high-tech tools at my disposal for a proper calibration. As for the 5020UBe’s wireless functionality, it is a bit hit or miss. It isn’t as easy as 1-2-3, for starters. So long as you maintain your heading on a single source, the signal, once locked, is fairly reliable. Change inputs or even material and you may find yourself wishing you had just connected the 5020UBe to your receiver or preamp directly.

In terms of visual performance, once all the requisite adjustments had been made, the 5020UBe was quite nice. It produced a bright, vibrant image that was capable of comfortably igniting screens up to 120 inches. Those with ambient light concerns but who are using smaller screens should definitely take note. With grayscale set properly and the color adjusted by eye, the resulting image was enjoyable and largely natural. There was still a tendency towards over-saturation, though I doubt most viewers will notice and/or care. Contrast was good, better than previous Epson offerings, as were black- and white-level detail. Detail rendering was good, though not great, as both it and overall edge fidelity suffered at the hands of the 5020UBe’s lack of 100-percent accurate panel alignment. Motion was smooth and artifacts were minimal, if present at all.

Read about the high points and low points of the Epson 5020UBe on Page 2. 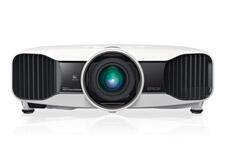 High Points
The 5020UBe’s fit and finish is solid, making it worthy of Epson’s top honors. Its half-manual, half-motorized controls strike the perfect blend between convenience and functionality, all but ensuring longevity, as the controls most needed to be adjusted are manual, whereas the others (like shift) are not.
The 5020UBe’s feature set is vast and very well-rounded in terms of checking all the requisite boxes that today’s modern home theater enthusiast needs/wants.
The addition of a wireless HDMI receiver/transmitter is cool and should help users with installation concerns, such as those who rent or live in older houses.
In terms of visual performance, the 5020UBe is solid. It is a marked improvement over the less expensive Epson products, but still has some stiff competition within its price class.
The 5020UBe’s light output is impressive, which makes it ideal for those with ambient light concerns.

Low Points
The included wireless transmitter isn’t what I’d call reliable and should only be used if a wired connection isn’t feasible.
Despite having the requisite controls to carry out a proper THX-level calibration, the controls simply do not work as advertised. You can, however, still achieve a natural-looking image through more analog methods.
The 5020UBe, like most three-chip LCD designs, at least those I’ve experienced from Epson and Panasonic (rebadged Epson), suffers from poor panel alignment, resulting in solid bands of color appearing along strong or stark contrasted lines, such as text.

Competition and Comparison
There are no shortages of roughly $3,000 projectors on the market today. Looking just at VisualApex’s site reveals a number of would-be competitors to the 5020Ube, such as Panasonic’s PT-AE8000U and BenQ’s W7000. Then of course there is JVC’s DLA-X30B at a little over three grand, or $3,499, to be exact. The X30B is the baby of the JVC line, though like its big brothers, it does carry with it the ability to be fully calibrated to reference standards, as well as tighter panel alignment tolerances. I’m not saying it’s perfect, but you definitely see where spending a little more begins to pay off when compared to the 5020UBe. Which is right for you is a matter of personal preference, as each of the aforementioned options all has its strengths and weaknesses, including the 5020UBe. For more on these projectors, as well as others like them, please visit Home Theater Review’s Front Projector page.

Conclusion
Let’s face it, it’s a great time to be a budget-conscious home theater enthusiast, especially if you’re looking to break into the front-projection game, for there are a number of options available today that simply wouldn’t have existed three or four years ago. The Epson 5020UBe is one such option, retailing for less than $3,000. This HD LCD projector is not only bright enough to be used in non-dedicated rooms, it produces an image that, with only minimal tweaking, can give some of the bigger boys a run for their money. It isn’t perfect and I argue that some of its included tech, mainly 3D and wireless HDMI capability, isn’t necessary, but overall, this is one projector worth exploring.