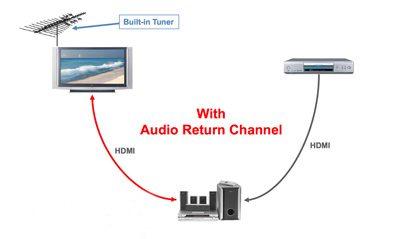 Feature News Stories, LCD HDTV News, OLED TV News
Published On: May 4, 2015
We May Earn From Some Purchases Via Affiliate Links

Are you still listening to your smart TV's internal apps through the TV speakers, even though a perfectly good AV receiver is sitting just a few feet away? Adrienne Maxwell explains the setup process and potential benefits of the Audio Return Channel function.

Smart TVs are great, right? The ability to access services like Netflix, Amazon Instant Video, and VUDU directly from the TV, without the need for an additional set-top box, is very appealing to people who desire the cleanest, easiest setup. But there’s one glaring problem with this approach: those pesky TV speakers, which offer mediocre quality at best and downright awful quality in many instances.

The average consumer–the one who doesn’t own an external audio system at all–listens to everything through their speakers anyhow. But I’m curious to know how many of our readers who own home theater systems listen to smart TV apps through the TV itself, instead of running sound to that perfectly good AV receiver and 5.1 (or higher) speaker system sitting just a few feet away. I confess, I do it far more than I should. Is anyone else willing to admit the same?

Granted, in my case, it’s often due to the fact that, as a TV reviewer, I’m constantly swapping out review samples, and I need to test the audio quality of those internal TV speakers. But even when my reference TV is back in its position of honor, I find myself reaching for the TV remote’s volume buttons rather than taking the time to properly set up the Audio Return Channel feature.

What Is Audio Return Channel?
Audio Return Channel (or ARC for short) is a feature of the HDMI specification (first appearing in v1.4, released in 2009) that allows you to send audio “upstream” from your TV’s HDMI inputs back to your audio system’s HDMI output in order to listen to the TV’s internal audio sources, like smart TV apps and tuned over-the-air channels. Most TVs include analog and digital audio outputs for this purpose, but that requires running another cable between the TV and sound system, while ARC allows for a clean, single-cable solution.

ARC can also be beneficial to those who own a soundbar or other audio system with limited HDMI inputs. You can feed your various sources (Blu-ray, cable/satellite, gaming console) into the ARC-supported TV’s HDMI inputs and route all of the audio signals out via one HDMI cable to an ARC-capable soundbar. However, we must point out that this particular approach may limit the audio from external sources like Blu-ray to stereo only. Some TVs will pass multichannel audio over ARC only from internal sources like the apps and tuned channels.

The arrival of Ultra HD streaming makes the value of ARC even greater. At this moment, the UHD streams from Netflix, Amazon, M-Go, and UltraFlix are only accessible through smart TVs, not standalone set-top boxes like Roku or Apple TV. So, if you want to enjoy surround sound along with your UHD resolution, you have to get the audio out of the TV either through ARC or the digital audio output.

Arguably the biggest downside to ARC is that, since it was originally designed to replace the TV’s digital audio output, it supports only the transmission of the same PCM, Dolby Digital, and DTS soundtracks that will pass over the SPDIF output. It doesn’t currently support the passage of Dolby TrueHD or DTS-HD Master Audio, although a representative from the HDMI Forum told me that this support is possible and could find its way into a future HDMI version. Right now, most streamed video-on-demand content is limited to DD 5.1, but that’s changing. VUDU and Netflix offer some titles in Dolby Digital Plus, for instance, and M-Go recently announced plans to offer DTS-HD Master Audio soundtracks for some of its 1080p and UHD movies. While it would be preferable to get these higher-quality streams, Dolby Digital 5.1 through your HT system is still better than stereo through your TV speakers.

The other drawback to ARC is that setup isn’t quite as simple as just connecting that one HDMI cable between your TV and AV receiver. (Is anything ever that simple?) I decided to take the bold step of finally setting up ARC on my system in order to document the basic steps for you. My TV/receiver combo is a Samsung UN65HU8550 UHD TV and Harman/Kardon AVR 3700 receiver. Of course, the procedure and nomenclature may vary slightly for your specific gear, but the general concepts should hold true. 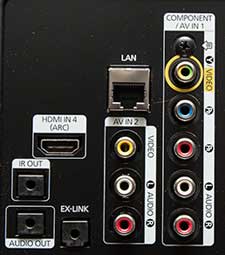 Step one: Choose the correct HDMI input on your smart TV
Your smart TV may have four or five HDMI inputs, but chances are, only one of them supports the ARC function. A thoughtful manufacturer will clearly label which HDMI port supports ARC. In my case, the Samsung supports ARC on HDMI input #4 (see photo). If you don’t see “ARC” printed next to one of your HDM inputs, check your owner’s manual. If the TV was manufactured around or before 2009 when the HDMI 1.4 spec arrived, it likely does not support the ARC feature at all.

A few things to consider: If you’ve had your TV calibrated and you switch to a different HDMI input to get ARC support, those picture adjustments may not be applied to the new input. Some TVs allow you to copy your picture adjustments across all inputs, but others make you set up you each input individually. Depending on how you or your calibrator handled this, you may need to port over your settings to the new HDMI input.

On a similar note, if your system is being professionally installed, make sure to tell them that you want to use the ARC feature so that they can set up the system and program the remote accordingly.

If you’ve purchased a brand new UHD TV, hopefully ARC and HDCP 2.2 exist on the same input, or else your clean, one-cable solution will go right out the window when you try to attach a future HDCP 2.2 copy-protected source.

Step two: Choose the correct HDMI output on your AV receiver
Many modern AV receivers have two or occasionally three HDMI outputs to send AV signals to multiple zones. As with the TV, you need to make sure to use an ARC-capable output. My AVR 3700 supports ARC on both of its HDMI outputs, and both are clearly labeled on the chassis. If you’re not sure about your receiver, check the owner’s manual.

Step three: Enable HDMI-CEC in both the TV and receiver
If you’re familiar at all with HDMI-CEC, you probably think of it as that feature that automatically turns off your devices when you don’t want it to–but HDMI-CEC isn’t just about sending power commands to connected components. CEC stands for “Consumer Electronics Control,” and it needs to be enabled in both the TV and AV receiver for ARC to function.

The HDMI-CEC setting is likely located in the general settings menu, and it can go by a variety of names. Samsung calls it “Anynet+,” and the menu includes separate options for control and power (see photo). The control option needs to be on, but you can leave the auto power function off, if desired.

Likewise, in the general system setup menu of the AVR 3700, I had to enable “HDMI Control” for the HDMI output I use, then set the Audio Return Channel from off to auto.

At this point, I had to restart both components to ensure the HDMI-CEC control was enabled properly in both devices.

In some TVs, you may need to make a few extra adjustments within the Audio setup menu: You may need to turn off the internal TV speakers and change the “Digital output” setting from PCM to Dolby Digital.

Step four: Switch to the correct source on your receiver
Now that your TV is officially an audio source in your home theater system, your receiver needs to treat it like one. The AVR 3700 has a source mode called TV through which the ARC audio is played. It’s an audio-only source, since the video is coming directly from the TV.

Make sure to program your universal remote with “smart TV” as its own activity and set it to switch to the appropriate source on your receiver.

That should do it. In my case, it wasn’t too painful, and it has worked well thus far.

If you’ve taken the time to assemble a good surround sound system, don’t shortchange your smart TV source. Take just little more time to set up Audio Return Channel and disable those TV speakers for good. It’s just the right thing to do.

Have you set up ARC in your system? Was it easy or difficult? How is it working? Share your experience in the Comments section below.

You'll automatically be entered in the HTR Sweepstakes, and get the hottest audio deals directly in your inbox.
Subscribe
Connect withD
Login
Connect withD
35 Comments
Oldest
Newest Most Voted
Inline Feedbacks
View all comments
This is the static ad content. This is just a placeholder for now to get things styled.
Visit Website

Samsung’s The Freestyle Review: A Portable Smart Projector for the Everything-From-Home Lifestyle