In a fun promotional campaign for Roy Jones Jr.'s next fight, the boxer took on model Alexandra Richards (daughter of rocker Keith Richards) in a Wii boxing match. The "fight" was shown off on Panasonic's 103-inch plasma at Madison Square Garden. 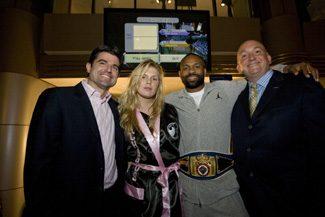