FIBARO has announced a new line of products that are compatible with Apple's HomeKit smart home platform. The Flood Sensor ($69.99), Motion Sensor (shown here, $69.99), and Door/Window Sensor ($59.99) will be available by year's end. All feature Bluetooth LE,... 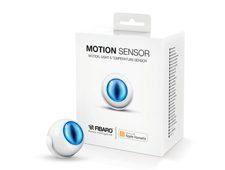 FIBARO has announced a new line of products that are compatible with Apple's HomeKit smart home platform. The Flood Sensor ($69.99), Motion Sensor (shown here, $69.99), and Door/Window Sensor ($59.99) will be available by year's end. All feature Bluetooth LE, and all can be controlled via FIBARO's new app or via the Apple Home app in iOS 10. Details on each product are available in the press release below.

From FIBARO
FIBARO is announcing a brand new product line compatible with Apple HomeKit. The three new devices--Fibaro Flood Sensor, Fibaro Motion Sensor and Fibaro Door/Window Sensor--feature intuitive technology and a sleek design with Bluetooth LE inside. Fibaro is also launching a new app for the devices to deliver ease of use, remote access and extended product functionality. All three devices also integrate with and can be controlled using the Apple Home app in iOS 10.

Fibaro Flood Sensor
The Fibaro Flood Sensor is the first water sensing and leak detection device in the Apple HomeKit ecosystem. The Flood Sensor is equipped with gold telescopic probes that detect water as soon as it appears and allows the device to function on uneven surfaces. Featuring an LED indicator along with an acoustic alarm signal to alert users of flooding or tampering, the wireless device can also trigger a smart home scene and notify a user of a problem through the Fibaro app or Apple's Home app. The Flood Sensor also acts as a temperature sensor, making it perfect for areas like a garage or basement. In the cold weather months, ask Siri to check the temp in an unheated area where a Flood Sensor is placed and stay ahead of burst pipes and potential problems.

Fibaro Motion Sensor
A CES Innovations honoree and an international design award winner, the Fibaro Motion Sensor is actually a multi sensor, measuring movement, ambient temperature and light intensity. It is battery powered and runs on Bluetooth LE wireless technology, and features an eye-shaped LED indicator that changes colors to signal motion, temperature level, tampering and light. The clever holder allows you to place the sensor anywhere in the home, even affixed to a wall, ceiling or other surface. The Fibaro Motion Sensor comes equipped with tamper protection thanks to its built-in accelerometer. Any unauthorized attempt to relocate or change the sensor's view angle can trigger an alarm.

Fibaro Door/Window Sensor
The Door/Window Sensor is a dual contact and temperature sensor that can be placed on any door or window and comes in seven colors to match any décor. Using Bluetooth LE, the battery operated device can be easily installed with provided double adhesive backing and has a low profile. When part of the HomeKit ecosystem, the Door/Window Sensor plays an integral role in the safety, security and convenience of a home.

Fibaro App
The Fibaro app is a native mobile application designed for Apple HomeKit. The app is designed with user friendly software to make it easy to set up and configure devices with a secure authentication process. Fibaro's HomeKit devices can be controlled with voice using Siri directly from an iPhone, iPad, iPod touch or Apple Watch. With an Apple TV, the app also allows for remote access and management outside the smart home. The Fibaro app gives users extended functionality including device status checks.

"Expanding our product line to include support for Apple HomeKit was a natural choice for Fibaro. The HomeKit platform offers a simple and secure solution for expanding the many benefits of smart home to a new category of consumers that, up to this point, may not have had the means or knowledge to participate. Working with companies like Apple to expand the mainstream consumer smart home market is very exciting for us," said Rich Bira, Managing Director of Fibaro in the U.S.