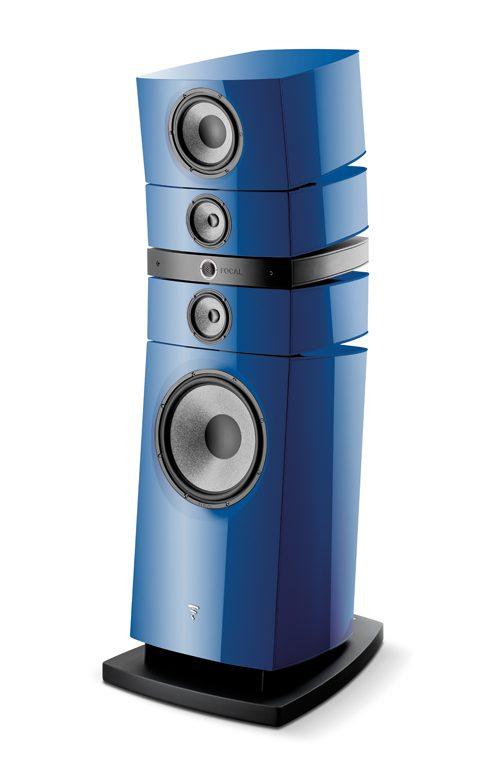 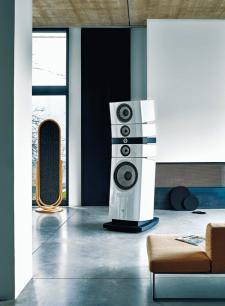 At the High End Munich show this week, Focal announced the top-shelf Grande Utopia EM Evo and Stella Utopia EM Evo floorstanding speakers, continued evolutions of the award-winning Utopia III first launched in 2008. The new models incorporate Focal advancements like TMD (Tuned Mass Damping) suspension and the NIC (Neutral Inductance Circuit), as well as a redesigned crossover and a new speaker scructure that has been strengthened by use of the new MRR (Machined Reinforcement Rings) system around the drivers. New automotive-inspired finishes like Metallic Blue, Ash Grey, and British Racing Green are available. More details are available in the press release below. The four-way Grande Utopia EM Evo and three-way Stella Utopia EM Evo will be available in September for $120,000 (each) and $65,000 (each), respectively.

From Focal
Focal launches the most emblematic high-fidelity loudspeakers of all its Collections–the Grande Utopia EM Evo and Stella Utopia EM Evo–at the 2018 High-End Trade Fair in Munich. Redefining the Utopia III Evo unveiled in 2017, the newest models embody Focal’s constant investment in research and development for true audio innovation. Built on a legacy of delivering the ultimate in acoustics, the Utopia III Evo line has always been unfailingly extraordinary.

THE LEGEND IS EVOLVING
Since its launch in 2008, the award-winning Utopia III has been constantly evolving, as Focal’s acoustic engineers are always refining their research to expand the limits of sound. Known for using unique materials, Focal’s innovation is not only clear in the speaker drivers, but also the crossover, the structure of the loudspeaker and variety of finishes available. Every detail has been developed to further push the limits of acoustic delicacy and transparency.

The Grande Utopia EM Evo and Stella Utopia EM Evo now integrate all the research conducted since the Utopia III was launched in 2008. They showcase the brand’s exclusive technologies, particularly in the midrange: the TMD (Tuned Mass Damping) suspension and the NIC (Neutral Inductance Circuit). The structure of the loudspeaker itself has also been strengthened by the new MRR (Machined Reinforcement Rings) system around the speaker drivers. More intimately, the crossover has been redesigned, the components modified and meticulously selected for a more accurate sound quality.
Like the first models in this line (Maestro Utopia Evo and Scala Utopia Evo), the Grande Utopia EM Evo and Stella Utopia EM Evo are available in new finishes inspired by the automotive world, like Metallic Blue, Ash Grey and British Racing Green. In addition to these colors, the whole line is also available Black Lacquer and Carrara White.

UNIQUE TECHNOLOGIES
SPEAKER DRIVER PRECISION
The TMD suspension provides a linear frequency response curve between 1 and 4 kHz, while dramatically reducing distortion in this range, resulting in a remarkable neutrality in the midrange register. It also contributes to the excellent precision of the overall stereo image. Stabilizing the magnetic field is a challenge to be overcome to avoid harmonic and intermodulation distortion. Research conducted by Focal engineers enabled them to create an unbelievably stable magnetic circuit, the NIC (Neutral Inductance Circuit) technology.

MEASURED AND ATTENTIVE INNOVATION
With the new speaker drivers, the crossover principle has been redesigned in a measured and attentive way to improve sound precision. The quality of components, essential for a very high-fidelity rendering, has also been upgraded, with materials being selected from the most high-end suppliers in the world. The bass register is immaculate, with a new acoustic wadding for an extremely restrained, controlled bass. 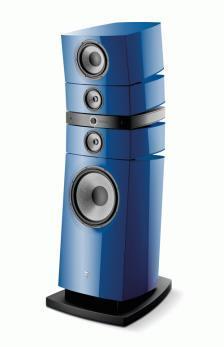 ORIGINAL FINISHES
All the loudspeakers in the line are now offered with new automotive-inspired, less conventional colors, with an ultra-sleek finish. Each speaker is available in Metallic Blue, Ash Grey and British Racing Green, as well as the timeless Black Lacquer and Carrara White.

The loudspeaker cabinet is fully lacquered, with the front and sides in one single color. Black makes a comeback in the details, with the baskets and tweeter cabinet in Graphite Black. All these finish choices ensure a more harmonious and understated coherence overall, which highlights the originality of the new colors. The silhouette of the Utopia III Evo remains unchanged, in a very contemporary style.