Focal has introduced the new Sopra speaker series, which consists of the Sopra N°1 two-way bass-reflex bookshelf speaker and the Sopra N°2 three-way bass-reflex floorstanding speaker. Focal describes these speakers as "offspring of the Grande Utopia" in a more compact... 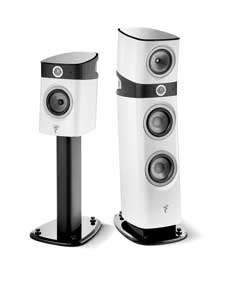 Focal has introduced the new Sopra speaker series, which consists of the Sopra N°1 two-way bass-reflex bookshelf speaker and the Sopra N°2 three-way bass-reflex floorstanding speaker. Focal describes these speakers as "offspring of the Grande Utopia" in a more compact form. The Sopra line features several new innovations for Focal, described below, and the speakers are available in a variety of gorgeous finishes--from carrara white (shown here) to imperial red to electric orange to dogato walnut. Pricing has not yet been provided, but the Sopra line will fall between the Utopia and Electra lines.

From Focal
Conceiving, innovating, pushing the boundaries while improving its expertise and staying faithful to its roots: Focal has taken up the new challenge. This new range of loudspeakers proves that even today it is possible to go further in the quest for audio perfection and excellence of the sound reproduction.

Sopra is the unique proof that in this age of digital technologies, docking stations and wireless sound, it is now more possible than ever before to give high-fidelity loudspeakers their importance once again. Inherently desirable but reasonable in terms of design, Sopra is destined for all those who, through space constraints or concern for modernism, would have thought that at some point the loudspeaker would go out of fashion. Modern in its approach and bringing obvious faithful musicality to your room, Sopra is about to seduce all music lovers who are enthusiasts of performance and equipment which reflect their true identity and which is not only intended for audiophiles.

A visual signature and technical ingenuity
Sopra's origins are immediately visible. Besides having Focal's DNA, it is also the offspring of the Grande Utopia, the prestigious loudspeaker developed in 1995 and whose third version was launched in 2008. Sopra has the same sleek silhouette conceived by designer Alain Pineau. This evokes, as Alain says, "the passionate quest reconciling complex constraints, experience and innovative and sophisticated solutions" which led the engineers at Focal to forge Sopra N°1 and Sopra N°2.

Through their so unique and inimitable visual signature, Sopra N°1 and Sopra N°2 bring unprecedented technical ingenuity. There are three main major innovations which make this line so unique.

• The tweeter's rear horn
Thanks to Focal's patented IHL technology (Infinite Horn Loading), the 21 milligram dome of the Beryllium tweeter no longer requires large cabinet volumes to prevent the rear sound waves from the dome being reflected back. Sopra needed to be compact, so the tweeter was given a graduated rear horn to avoid any return energy effect which can cause distortion.

• Midrange suspension
The surround connecting the W cone to the chassis can cause anomalies at certain frequencies where its movement isn't in perfect phase with the cone. When applied to Sopra's 6'' (15cm) woofer, Focal's patented TMD technology (Tuned Mass Damper) counterbalances the resonance of this oscillating system and gives the sound incomparable transparency. Made possible thanks to the power of numerical analysis carried out by Focal, TMD ensures that the sound stays pure and that very high definition is maintained.

Equipped with transducers which are "Made in France" for the bass, midrange and treble which are probably recognised as being the best in the world, and benefitting from major technological innovations which weren't possible three years ago, Sopra N°1 and Sopra N°2 are premium loudspeakers capable of unprecedented performance in such a compact design. Emblematic of Focal's sound signature, the new Sopra line has now paved the way for a new era for the world of high-fidelity.

Additional Resources
• Focal Dimension Soundbar and Subwoofer Reviewed at HomeTheaterReview.com.
• Get the full details and specs on the new Sopra speakers on the company's website.