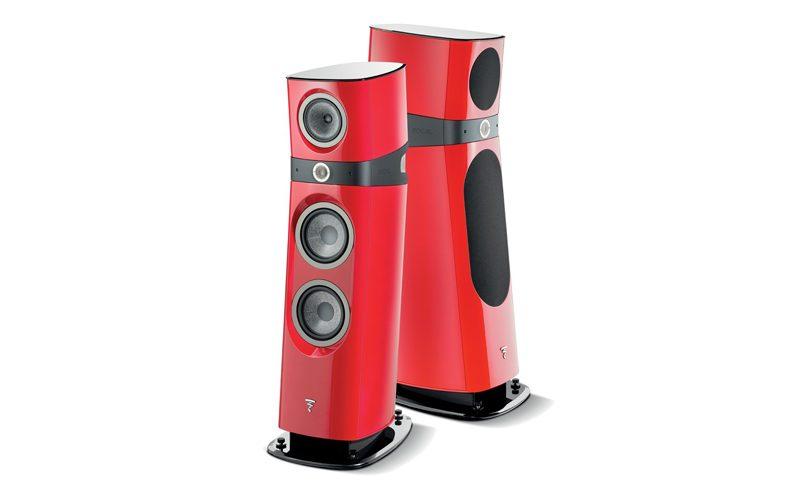 Focal began as a speaker driver manufacturer in 1979 in France and has been forwarding high-end speaker driver design ever since. The company's first speaker was released in 1982 to much praise, and Focal currently makes a speaker for most every use and budget. The Sopra line has three main speakers: the N°1 bookshelf model, the N°2 floorstander, and the larger N°3 floorstander, the most recent addition to the line. The larger size of the N°3 allows for more bass extension and higher dynamic range. The N°3 is designed for the discerning listener and audiophile; but, at $19,999/pair, they are much less expensive than other speakers with which they are intended to compete.

Focal put a lot of thought and design into the aesthetics of the Sopra line. The speakers come in a variety of finishes, including gloss white, black, red, orange, and wood-paneled. They are beautiful speakers to look at, and anyone can surely find a color to fit their home. My review samples came in gloss white, and I auditioned them with the matching Sopra Center.

The Sopra N°3 has received a lot of trickle-down technology from Focal's Utopia line, plus some new R&D advancements exclusive within the Sopra range. It's a three-way design that utilizes two 8.25-inch bass drivers and a 6.5-inch midrange driver. The Sopra Center, meanwhile, has two 6.5-inch bass drivers and a three-inch midrange. Both speakers use the same 1.13-inch pure Beryllium tweeter. In the N°3, the Beryllium tweeter is precisely positioned at the best height for listening, and the midrange is placed above the tweeter to time-align the drivers for coherency at the listening position. Focal engineers added an IHL or Infinite Horn Loading system that dampens the ultra-light, rigid Beryllium tweeter to allow free movement while designing the main cabinet with segmented inner chambers to maximize bass performance.

The midrange driver has Neutral Inductance Circuits to stabilize the magnetic field through which its voice coil travels. A magnetic field is disturbed by an object moving through it, as well as the frequencies around it. Focal has spent years developing ways to minimize if not eliminate this effect, exposing the voice coil to a consistent magnetic field and thus maximizing accuracy of the driver's reproduction.

The surround of the midrange driver is designed with Tuned Mass Damper technology, similar to what is employed in racecars and seismic building stabilization. Conventional wisdom would eliminate distortion in the surround by making it heavier and less likely to deform, but this decreases efficiency and performance. Adding the Tune Mass Damper allows Focal to minimize this distortion and weight, allowing the driver to perform more consistently without losing performance.

The Hookup
These speakers are big ... even bigger than Focal claims. I measure them as 51.5 inches tall, and the base is 16 by 24 inches at its widest point. Focal has designed the packaging to make the unboxing process fairly easy; however, since each speaker weighs in at over 154 pounds, the N°3 is not something to be unboxed and set up by a single person. Your best bet is to have your dealer deliver and install them for you. I was lucky enough to have a rather large and good friend over when the truck dropped them off, and it was still difficult to move them into place.

My buddy and I shuffled them into the same spot where my previous speakers resided and angled them in at the listening position. I held off on attaching the included spikes, since I have wood floors and figured I would need to move the speakers around a bit to find the ideal location. (Focal includes discs to protect your floors from the spikes.) Positioning the Sopra N°3s actually proved to be a breeze. While they are large speakers, they disappear sonically without much wiggling. Focal has a formula using the distance from the woofers to the floor, as well as the nearest and farthest walls. When I placed the Sopras where I liked them and checked the formula, I discovered I was within a few inches of what the formula calculated. I've never positioned my speakers with an algebraic equation before, but it seems to work.

For sources, I streamed CD-quality TIDAL and some lesser-quality Pandora through my Control 4 system and played silver discs through an Oppo BDP-103D and a Samsung UBD-K8500 UHD Blu-ray player. Control and power came from my Classé Sigma SSP preamp and Classé Amp 5, while all speaker wires were 12g OFC wire.

My current room is a little lively, with several windows, glass doors, and hardwood floors. Right out of the box, the Sopra N°3s sounded a little bright; they definitely needed some break-in before I began my official assessment. I used them for a few weeks, and things really settled in. The slight edge and sibilance that was initially present left completely, and the bass opened up and smoothed out.

Performance
I started off my official listening session with Keb' Mo's The Door (Epic). From the opening of the title track, I knew there was something special about the Sopra N°3. The vocals were clear and smooth. The attack of the guitar was fast but not startling, as some overly accurate speakers can be. Every note of the song was clear and distinct. Bass drum notes were solid and had a richness to them. On the more upbeat "Stand Up and Be Strong," the guitar was clear with no edge. Every note was smooth and lush. "Gimme What You Got" had great depth to the bass line, while horns just sounded perfect. The soundstage from these speakers is huge. More than once since I have owned them, I have checked to confirm that my center channel wasn't in use with stereo music. My room is pretty large (18 feet by 30 feet), and these speakers have no problem filling the entire room and producing a very large sweet spot.

Moving on to Jimi Hendrix's Blues (MCA Records), the opening notes of "Hear My Train A Comin'" (acoustic) showed detail beyond what I have learned to expect. Each string of the 12-string acoustic guitar was discernible, and the depth of the low end was amazing. Jimi's voice was warm without a hint of glare. "Catfish Blues" is a heavier song and has a much more pronounced bass guitar. The Sopras kept everything nicely in check. I have heard speakers fall apart when heavy bass demands fall on them, but these did not. The Sopra N°3s kept the instruments and vocals completely separate no matter what was going on in the song or how loud I listened. Every individual element of the music was clear and distinct--not in an obnoxious, in-your-face manner, but in an easy and lush way that was so wonderful to listen to. The Sopra N°3s draw you into the music and surround you in it.

For some multichannel movie action, I cued up Kingsman: The Secret Service (Twentieth Century Fox) on UHD Blu-ray. The film's DTS-HD MA soundtrack is awesome. Much of the surround effects are strings, and they filled the room through the Sopra setup. The sound effects were larger than life, and Samuel Jackson's voice had a depth to it that amazed me. Transitions were insanely good, and frankly the way the Sopra Center reproduced vocals is the best I have ever heard, with a wonderful depth to them. The front three speakers melded together better than any system I have ever experienced. Subtleties like the fizzing of the champagne bubbles in the bar scene were amazing.

I had to fire up an old favorite on Blu-ray: Fight Club (Twentieth Century Fox). I love the work of Chuck Palahniuk, and this film has always been one of my go-to demos. From the start, Ed Norton's voice filled my room and had a depth that I'm not used to hearing, even through Wilson Sasha W/Ps. Transitions sounded amazing. Cars seemed to float across the front of the room. The echoes in the church seemed larger than the room I was in. Vocals were simply the best I've ever heard in my room or nearly anywhere else. This set of speakers not only revealed all the detail in any given passage, but they did so in a way that was pleasant. Most speakers that are credited with "discernment" are edgy, but the Focal Sopras are lush and wonderfully pleasant to listen to.

The Downside
The Sopra N°3s have a very sleek and modern look that may not suit every décor. They look great in my home, but more than one person likened them to robots. They are also pretty large, and I suspect that a small city apartment would not be the best destination for them.

The Sopra N°3s and Sopra Center only have a single pair of binding posts; so, if you like to bi-amp or bi-wire your speakers, that isn't an option here. While they deliver excellent deep bass, they are not going to rock Iron Maiden without some help from a subwoofer. If you've got $20,000 for speakers, one might argue that another $2,000 for a subwoofer to handle deep bass is justified.

Comparison and Competition
At this price point, there is a lot of competition. Focal's own Utopia Scala is something to consider if you want the Nth degree of performance, but they will cost you a hefty $14,000 more per pair.

Going the other direction and addressing some of the concerns I mentioned above, the Focal Sopra N°2s are smaller, easier to fit in your room, and cost less, at $14,999/pair. You could definitely go that route and add a couple subwoofers.

Wilson Audio's Sasha W/P ($30,000/pair) would be a relevant comparison. Having owned them, though, I can say that the Focal Sopra N°3 is a more enjoyable speaker to listen to ... and costs $10,000 less. The Wilsons are more analytical and far more difficult to get tuned in properly.

I hear great things about Bowers & Wilkins' new 800 D3 speakers, but I often find B&W speakers to be a bit laid back and polite. Paradigm's Persona speakers with Beryllium tweeters and powered bass drivers (a concept that some audiophiles are resistant to) are comparable in terms of gorgeous fit and finish, as well as efficient performance.

Conclusion
The Focal Sopra N°3 is definitely my favorite speaker to date--and I've owned Wilsons and plenty of other high-end speakers. As far as I'm concerned, the performance that these Sopra speakers delivers makes them a bargain at their price, which will likely be hard for some people to believe. They offer a smooth, almost liquid sound that just draws you into the giant soundstage they present. They can fill a large room, and you won't be tied down to one small sweet spot to hear all that they can do.

I also want to give a special mention to the Sopra Center. Many center channels fall short with vocals, but the Sopra Center produces crystal clear voices without any edge. The transition across the front three Sopra speakers is the best I've heard. You can expect seamless sound across the front of your soundstage in ways most audiophile speakers can't deliver. To my ears, you would be hard-pressed do better for a two-channel system or for the front three in your high-end home theater.

Should you buy them? It depends on your budget and needs. Personally, I wrote the check and would suggest that anyone shopping in the higher-end market (especially those who are able to spend much more) find a dealer and demo the Sopra N°3s before you buy something else. They are just that special. Three reviewers on the HTR team have now switched from other speaker brands to Focal Sopras--that says it all.